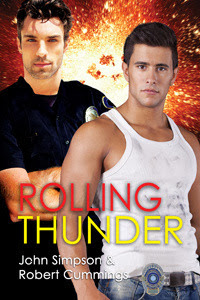 Sequel to Murder on a Queen

Budget cuts shuffle the decks of the Prince George’s County Police Department. Separated after years as partners, Hank Capstone and Patrick St. James find themselves having to make a new start. Assigned as a training officer, Hank takes on the tough task of showing hot, fit young rookie Jessie Morgan the ropes. Unfortunately, Jessie’s beauty is only skin-deep as he seems to have a habit of spouting homophobic comments to anyone who will listen. Still, Hank watches closely, figuring his rookie hides a deeper secret.

While Hank is distracted by his new partner, secrets from his past resurface. A former Iraqi general with a grudge against Hank arrives in the area seeking revenge. Does his appearance connect to a terrorist threat made against the local mall? Hank and Patrick must reunite to save the day.

I have been a huge fan and follower of John Simpson since I first read Murder Most Gay. So, yes, I have been following this series and have loved every single one. On to a year after Murder On A Queen was released, we now have Rolling Thunder, the story where Pat and Hank meet and greet a new character, Jessie Morgan.

Jessie is a gay man trying so hard to be the most bigoted homophobe in town, thinking he should be so as he is gay himself. Calling him a closeted bitch was, for me, the best line in the book. Soon, we see Jessie experience the life of a gay man and meet the man of his dreams.

In the meanwhile, we have this side story, where a former general in Saddam Hussein's army finds himself without means to support his family and gets entangled with a group that not only results to a disastrous fatality but a means to get back at the evil westerners and the specific Joe who pulled that trigger. And really, this is the character I never expected to feel for. He is not only twisted, he is desperate in his need to avenge his life and country. This was a character written for us readers to understand that other side of the coin where drastic changes can lead to illogical logic.

Pat and Hank and their husbands are in this story and as per usual, I love these guys. They are such men but at the same time such queens, they just make me smile, laugh and wonder.

Rolling Thunder is a suspense thriller with some bit of action and a whole lot of snarkiness and I just loved it. This is a great addition to my list of favorites and can't wait for when the next adventure is released. I just hope it does not take another year.