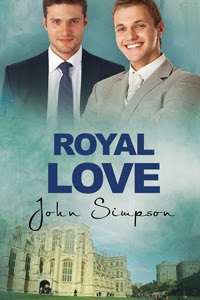 With their adopted son Jack safe and sound back at the Winfield House, US Ambassador David Windsor and his husband, ex-Secret Service Agent Shane Thompson-Windsor, begin to settle into a routine. Shane’s attention to the security of the US President’s adult son, Airman Darren Wilson, keeps them busy, however. While David and Shane think they have President Victoria Wilson's son under wraps, Darren carries on as carefree as any young man in the arms of a man he’s sure he loves: Prince Michael.

Discreet outings in the English countryside and days spent visiting castles fill Darren and Michael’s time, under the ever-present eyes of security, the US ambassador, and Shane. But an incident at a gay nightclub leaves their guards scrambling. What will Darren’s mother think? How will the King react? Darren and Prince Michael’s love affair might be over before it even begins.

I couldn't help but smile when I saw the blurb and it was about Michael and Darren. Following the series has been a real delight and seeing the young boys grow up to be men was just like seeing my own kids growing up and becoming adults. That this is a John Simpson novel, where the improbable became possible and real, after all these years, this royal romance is a wonderful fairy tale.

The author may not like my comparing his tales to fairy tales, if so, I have to apologize. But where all his other books in this series were about politics and intelligence, this is the one book that brings me back to when the Condor first meets his Sean and I got hooked.

This is the story of Darren and Michael. Darren, now a young navy career gentleman, is stationed in London to serve his country and his mother, now the President of the United States. He is seeing his very own Prince.

The two men start off as companions and just plain buddies with benefits, but soon their relationship turns more serious as each find the other completes them.

Michael woos his Darren oh, so romantically amidst the settings of the old English and Scottish countryside and old castles. Of course, they two are so used to their detailed bodyguards, they seem unfazed by their presence and have the blast of their lives. Their romance soon blossoms to true love and the rest, as they say, is history in the making. John Simpson Style.

I just so love this author's stories. When I first got to read them, many things were still impossible or even improbable. I guess he had a vision of what the future should look like. And in so many ways, his books served as predictions. Well, far out predictions, others may say, but they did predict things that we are now just seeing and accepting.

Of all the books of the Condor series, Royal Love is the least violent and angsty. This is a pure and simple Royal Love Story, but with two men. Very entertaining, very sexy at times, quite sappy in many areas, but still one of the most enjoyable reads. I just loved this.
Posted by multitaskingmomma at 8:47 AM