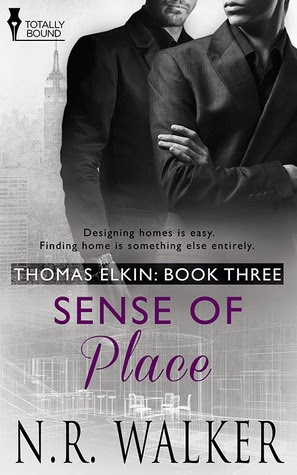 Designing homes is easy. Finding home is something else entirely.

Thomas Elkin and Cooper Jones finally have the support of their families together, and their love grows stronger every day. Now living together, they thought nothing could stand in their way.

But there are outside influences trying to pull them apart.
Cooper encounters a man, closer to his age and with connections high up the property development chain. Tom encounters discrimination and a hidden agenda from a fellow senior-partner.

No matter what the world throws at them, Tom and Cooper are the real deal. Age differences aside, Tom has finally found his sense of place. His one true center, his home.

Here we are once more, with an N.R. Walker Thomas Elkin book. This time, we have Tom and Cooper going on with their lives as happy as can be, what with both their sides of the family accepting their relationship and loving them. They are comfortable, they are happy, they are content, what could go wrong?

Well, as life goes on, there will always be hiccups that come along and both Tom and Cooper are not spared these. In Tom's case, it is to find an old friend and colleague getting all angsty and phobic against his relationship with a much younger man, and a former intern at that. For Cooper, it's a client who thinks hiring him for his talent and skills should include some tango between the sheets. Nuh uh! Nope, Cooper says no! Thing is, this guy won't stop!

Both men try to get around, over and under these petty goings on. It was trying for both, it set them to work harder, and it sent them closer to each other. Their sense of trust was set on a foundation so strong, there was really no room for anyone to creep in between.

The plot for Sense Of Place is just as simple as the first two books, but it is the way it is written that is not simple. Not at all. It is light reading, it is entertaining, it is romantic, it is simply a feel good book that is very, very hard to put down.

After reading the first two books, I was a tad disappointed that this may be the end of Tom and Cooper's adventure. It makes me a little sad, but I am happy at the same time, too, for their lives have finally reached that stage we were all waiting for.

There was a bit of drama going on here, but it was dealt with in a calm manner that it really did not feel like drama. It felt like a hiccup which we all hate but choose to tolerate knowing it will die a natural death. Thing is, while it is going on, we can cuss and get frustrated, impatient as to when it will finally end. As all feel good books, the hiccup ended and we were all treated to a beautiful ending.

And the goofy smile stayed on my face all the way from beginning till the end.

Posted by multitaskingmomma at 2:36 AM