Review: Synchronicity (Love Has No Boundaries) by Keira Andrews 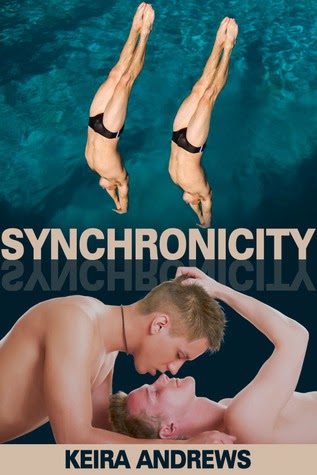 It's the opportunity of a lifetime for Tyler Bourne to compete in Olympic synchronized diving with veteran Aiden Oxford. The last thing he expects is to fall head over heels for his gorgeous partner. Friendly but distant, Aiden keeps him at arm's length, and Tyler knows his feelings are hopelessly one-sided. But as the Games begin, Tyler learns nothing is certain until the final dive.

Dear Author,
I could look at him all day. But sometimes, when he thinks I’m not looking, he seems so sad…

This story was written as a part of the M/M Romance Group's "Love Has No Boundaries" event. Group members were asked to write a story prompt inspired by a photo of their choice. Authors of the group selected a photo and prompt that spoke to them and wrote a short story.

Synchronicity is Keira Andrews' take on an Olympic event where two male divers, matched to physically match the other, have to take their dives together as one. It is supposedly a match where both men seemingly know each other so well, they can match their thoughts and moves to perform that perfect dive.

Tyler and Aiden are the male synchronized diving contenders for the Olympics. Their match was quite recent as Aiden's former partner had been found to take performance enhancing drugs. Their match was perfect in so many ways as one observed that no one could really distinguish one from the other when their backs were turned, nor when they were facing the audience. They were a perfect pair and their performance showed it. Something more than their physical pairing was going on, though, for the two men are slowly and quietly falling for each other.

This is a very short and sweet read, but like any of Ms. Andrews' works, she goes straight for the jugular of the romance without going crooked on the plot. The reader, in just so many words, gets the full impact of the romance developing between the two men.

If there was one thing I have to complain about, it's the length. I could have used one more chapter, or even two, so the whole story wraps up neatly. I wanted to know more about what happened next. I do know this is a very short story, but this has a lot of potential to develop for a much longer one. It did succeed in making me feel nice and goofy.