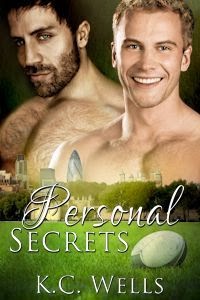 Blake Davis and husband Will are delighted when Ed Fellows turns up at the hospital the night their daughter is born—even if he is covered in mud from playing rugby and drunk out of his skull. Team-mate Colin is the Good Samaritan who drives him there, and when Colin takes Ed home, Colin finds himself on the receiving end of a blow-job. He has no problem with that whatsoever. He’s been in lust with Ed since Ed joined the rugby team some fourteen months ago. Only thing is, Colin’s assumed up ’til now that Ed is straight. Except the man sucking him off certainly didn’t seem straight….

Talk about the morning after the night before…. Ed awakens to find a nearly-naked Colin asleep on his sofa. The problem is that for some reason, he can’t get Colin out of his mind. Okay, so it wasn’t the first blow-job Ed’s ever gotten from a guy—or given, for that matter—but that was a long time ago, right? And why does Ed now want more?

With friends Rick, Angelo, Blake and Will to advise him, Ed finds himself on a completely unfamiliar road, as he struggles to accept that maybe the line he is walking isn’t as straight as he’d first imagined….

When I read More Than Personal (Personal Book#2.5), there was a scene where I got tickled pink over the thought of Ed. He was walking into the hospital waiting room for the birth of Blake's and Will's daughter and with him was a hunky hunk of a man in rugby uniform, splattered in mud and just looking plain delicious. Will had caught him eyeing his friend, Ed, and his gaydar went PING! His name was Colin. That was the scene that made my heart to thump. Maybe, just maybe, Ms Wells would find the time to tell us the tale of that hunky rugby player?

For those who missed out on that novella, it is really not a problem as that scene is written into this one, Personal Secrets, from Colin's point of view. And it just confirmed what Will had suspected all along. (However, it is best to read it so as not to miss out on some things HOT!)

That night turned out to be the definitive turning point in Ed's life. It was that night where his outlook on life, his whole perspective on who he was, changed. It was that night when he discovered something so unexpected that it shocked him speechless. It also made him act idiotic. Curiously, he absolutely loved it.

The secrets are really those which Ed kept from himself. Colin helped him find his way around them, finding his hands full. Thanks to friends like Rick, Will and Blake, Ed had all the support he needed to face up to himself.

There was not a whole lot of drama going on here, just personal conflicts that quickly turned mountains out of a mole hills. These were easily ironed out, again thanks to the support group and Ed himself. He is the type to never back down, even after over thinking things, acting the idiot or simply being stupid. He is also the type who accepts his shortcomings. His insecurities he had to deal with once in a while. And Colin was there to guide him through it all.

The relationship between these two was a very light read and yet it was a detailed revelation. I have read all of the Personal books but it is this book, this one about Ed and Colin, which is probably my favorite of the lot. It shows how men, as macho and bearish as could be, still show their insecurities and I found that refreshing. Ed was a delight to read, especially when it was so easy 'listening' to his Cockney accent contrasting mightily with Colin's more refined one. The two were a perfect fit. As for Colin. This man, he is a dream whom many a man (and woman!) dream of having in their lives. He is patient, considerate, loving. That he is a hunk is a bonus.

Overall, author K.C. Wells has given us another winner among her other winners. It's just that....this is my favorite. I just love it.

Posted by multitaskingmomma at 11:04 PM