Blog Tour: Excerpt and ARC Review of You Can See Me by A.E. Via 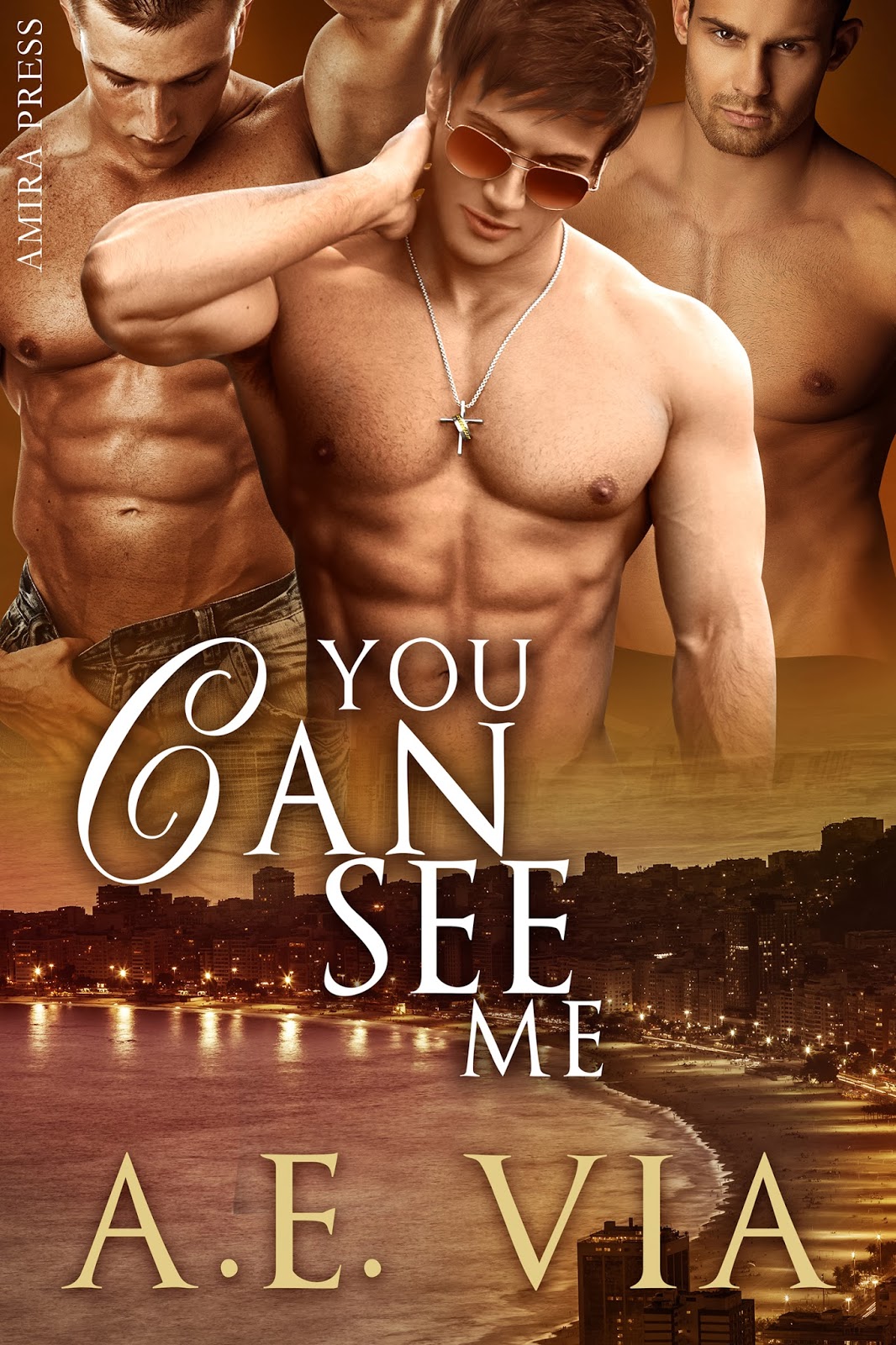 World renowned chef Prescott Vaughan was at the height of his career. Right before he's to leave for Paris to work alongside his idol, a horrific car accident leaves him completely blind.
His female fiancé leaves him in a state of desperation and depression.  He pines for love, companionship, and so happens to find it in the form of his very sexy neighbor.  Sexy male neighbor, Dr. Rickson 'Ric' Edwards.
Prescott's not gay - at least he never considered himself gay - until Ric saves him from a date, gone terribly wrong. The two neighbors hit it off quickly and waste no time exploring and learning each other.  Things are great until Ric begins to have his doubts about meeting Prescott's many wants.
When Ric insist he and Prescott take a breather, Pres finds himself lonely and lacking again. Enter, male escort and aspiring chef, Blair McKenzie to fill the void.
In the meantime, Ric works on his issues that prohibits him from displaying the love he knows he has for Prescott. When Ric is finally ready and returns to claim Prescott he's not sure that Pres can let go of the sexy, southern, hotness that is Blair McKenzie. After Ric has his own personal encounter with the sinfully sexy man, he can't help but become entranced and crave more as well.
Pres soon realizes that there's no need to choose between his two men, because when all three of them finally come together - grab a cold drink - the heat is going to go all the way up!
This is not your typical gay ménage romance. Everyone is not happy, skipping along, and loving life. These men are at each other’s throats. They live completely separate lives; fuss, cuss, and fight until they all realize exactly what the problem is...too damn much sexual tension.

Continue On To Read For An Excerpt From You Can See Me by A. E. Via

When she’s not clicking away at her laptop, A.E. runs a very successful paralegal-for-hire business and in her spare time, she devotes herself to her family – a husband and four children – her two pets, a Maltese dog and her white Siamese cat, ELynn, named after the late great gay romance author ELynn Harris.

While this is only her second novel, she has plenty more to come...so sit back and grab a cool drink, because the male on male action is just heating up!

Go to A.E. Via’s official website http://authoraevia.com for more detailed information on how to contact her, follow her, or a sneak peak on up-coming work, free reads, and where she’ll appear next.

Ric leaned his head back against the elevator paneling and watched the numbers light up all the way to floor ten before his eyes drifted shut for the rest of the way. When the doors opened, he came face-to-face with Prescott’s Texan.

Instead of the gorgeous prick getting on the elevator and leaving, the cocky bastard took a couple steps back and leaned against the wall on the opposite side of the hallway and stared openly at him as if he hadn’t a care in the world. His hazel eyes scanned Ric up and down, taking in his disheveled, stressed-out appearance.

“Do you have a fucking problem?” Ric growled, refusing to pretend to be cordial to the man even though he was a complete stranger and had done absolutely nothing to him.

The man had the nerve to smirk at him and shake his head as if pitying Ric, or perhaps throwing it in Ric’s face that he’d definitely had a better night than he had. Ric did try to hide his anger at knowing the man had slept with his Pres. Why the hell else would he be leaving at five in the damn morning? Unless he delivered newspapers or milk, he had absolutely no reason to be on this floor this time of morning. Bastard.

“No, I don’t have a problem,” he drawled slowly, making sure to put extra enunciation on the “I” part of his sentence. “But, obviously, you do. Or else you wouldn’t be scowling at me for no reason.”

“Fuck you,” Ric snarled, stepping just a little closer. He wanted to tear the man’s lips off for talking with that accent. Then he wanted to rip his hands off for daring to touch his Prescott. The man’s probably a male gold digger.

“Did you enjoy taking advantage of Prescott? Did you get what you came for?” Ric growled like a rabid animal three inches away from the man’s face, but he’d be damned if the asshole didn’t even flinch at his showcase of fury. No reaction whatsoever.

The Texan had one hand casually tucked in his jeans pocket, kicking back one side of his stylish blazer, while he lazily rubbed his other hand over his taut chest and washboard abs that showed through the thin material of his untucked dress shirt. Ric hated to admit it, but the man looked well fucked, and he wore it well.

“How could you do that to someone like him?” Ric fumed, and it took everything in him to control his rage.

If I hit him, no one would know. There’s no one around, no witnesses. It’d be his word against mine.

“I knew I’d peg you in less than five minutes.” The man spoke with one dark brown eyebrow cocked up. He ran his fingers through his bed-tousled dark brown hair and let out an exasperated breath.

“Now I know why you were too stupid to hold on to Prescott Vaughan. You were too busy feeling sorry for him. Instead of you seeing a brilliant man, a world-renowned, accomplished chef who happens to be one of the most talented men to ever set foot in a kitchen, you see a needy, helpless man. Ahhh. Now it makes perfect sense.”

“Don’t try to act like you know me because you don’t,” Ric growled, still trying to be mindful they were in the hallway of the floor that he lived on.

The Texan pushed off the wall and closed the few inches between them. His six feet, two inches of height had him eye to eye with Ric, and the man showed no fear. His handsome face was now a mask of furious anger.

“I saw you treat him like shit on the bottom of your shoes last night. I watched him beg you for five fuckin’ minutes of your time, and you spat in his face. Now, you have the audacity to say I’m mistreating him? Fuck you,” he snarled right back at Ric.

Just as fast as the man’s anger came, it disappeared, and he composed himself to reveal that smirk that Ric selfishly rejoiced Pres couldn’t see, because it was sexy as fuck…and the man knew it.

Ric watched his competition push the elevator button as he rubbed his hand over his morning stubble before speaking again. “You know what they say, don’t you, Doc? One man’s trash is another man’s treasure, and Prescott Vaughan is definitely a rare, precious treasure.”

The Texan inched in even closer, which surprised the hell out of Ric since they were practically nose to nose. Ric was smacked in the face with a faint soap-and-water fragrance that made his eyelids flutter and his own dick jerk to life. Ric’s half-lidded eyes were riveted to the Texan’s plush lips as he leaned in and whispered directly into Ric’s open mouth.

“If you don’t pull your head out of your ass and claim Prescott Vaughan like he wants, I won’t stop until I’ve fucked the sexy strawberry ten ways to Sunday and there’s not a single trace of your existence left in his mind, because with or without you, he needs love, and I was the one there last night to lick his sweet tears when you walked away.”

The elevator doors opened at his final words, and the smooth Texan took a few graceful steps backward into the elevator and gave Ric a sexy wink right before the doors closed.