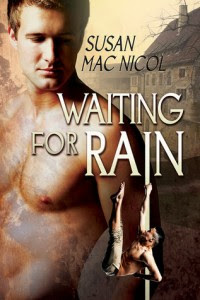 The village of Stamford, the quintessential chocolate box English scene, seemed an impossible dream for foster kid Toby Prentiss. Now he’s found a home among the haystacks and village fairs as the General Manager for the Duck and Drake Hotel. With the fears and demons from his youth hidden away in this bucolic oasis, he’s very protective of who he lets in. Until he stumbles across shirtless carpenter Rain Engel building the hotel’s new custom-designed bar.

Working in the countryside, Rain prepared to face his biggest fear: sheep. He didn’t expect to deal with his second biggest fear: commitment. Toby’s controlled, tough guy façade coupled with his “find happiness where you can” optimism calls to Rain like nothing before. While Rain may be an exhibitionist, his romantic history forces him to hold his emotions close. As their relationship develops, secrets from their pasts drive a wedge between them: the ex-boyfriend who tore apart Rain’s trust and Toby's history with the law. But can the secrets hiding among the quirky villagers bring them together? With missing sheep, pole dancing at the winter festival, and a crippling drought, everyone is waiting for Rain.

Author Susan Mac Nicol has just managed to turn tables on this reader and fan. Used to the sometimes dark plot lines and drama-filled books I had read so far, I armed myself with a box of tissues even after being advised by said author there would be no need.

I did not cry.

I did find myself flushing hotly, blushing oh so red, fannedmyselfsilly, shake my head to clear it of the uberdelicious smexy scenes, and tried to remember how to breathe.

Waiting for Rain is not really a straight on romance, rather, it is a story of courtship between one Toby Prentiss and boyfriend Rain Engel.

Toby was a survivor of the over-rated foster care system and through true grit and determination, managed to rise above his situation. He got out of bad situations and made sure to get the education he needed. He finally landed a good job in a hotel in Stamford and is now General Manager. The road to his success was rough, but the experiences were all lessons that built character and integrity. Experiences he embraced fully.

Rain Engel's past was that of a broken heart he still had a hard time shaking off. Breaking all ties from the city, he sells his business and sets up shop in the village of Stamford with best friend Lucas. Business brought Toby and Rain together and from the start, sparks flew. Just not the kind of sparks formulaic romances are made of.

Two independent men, fire in their blood, opinionated and successful in their own rights, their attraction for each other was lust at first sight. Admittedly, this was not a good beginning for both but this is where the author starts spinning her tale and came up with gold.

The romance between Toby and Rain does not go the usual formulaic path. The readers walk their way through their lust turned romance, their courtship, their personal dramas, their reconciliations, their lives. The author does not hide the beasts and demons these men carried within them. Everything is laid out in the open for readers to either love or hate. Laid bare like this, it paved the way to some of the more ridiculous situations both men go through, lending some bit of comedy through the read.

There were supporting characters in the form of Simon, Toby's boss, and Tammy, his best friend. There was also Lucas, Rain's best bud and partner. Honestly, though, it was Mr. Cocky who was my favorite character and I just wish he had the chance to speak up as I am curious what he actually thought of the whole situation. Admittedly, he did enjoy himself to the hilt and he constantly showed it.

Then there is Rain's pole dancing.

Dear readers, this is the time to prepare. I have to admit, I am writing this review listening to the witchy tune of Small Town Witch by Sneaker Pimps. I had also watched the trailer to this book while waiting impatiently for this to land in my hands. Watching Andre Corey bring to life the Rain dance? Ohmeeegoshhhhhhhhhh! It just brought this book to a whole different level that is impossible to put to text. You have to watch him in this TRAILER to get the full experience.

...as well as insights on my guilty pleasure: pole dancing.

**Note: eARC was provided by author for honest review.

Susan Mac Nicol was born in Leeds, UK, and left for South Africa when she was eight. She returned to the UK thirty years later and now lives in Essex. Her debut novel Cassandra by Starlight, the first in a trilogy, was published earlier this year by Boroughs Publishing Group in the US. Sue’s latest story, Saving Alexander is her second m/m romance.

Sue has written since she was very young, and never thought she would see herself being a Romance writer, being a horror/psychological thriller reader all her life. But the Romance genre is now something very close to her heart and she intends continuing the trend.

Sue is a member of the Romance Writers of America and the Romantic Novelists Association here in the UK.

Posted by multitaskingmomma at 1:11 AM