Review: A Better Man (The Men of Halfway House #1) by Jaime Reese 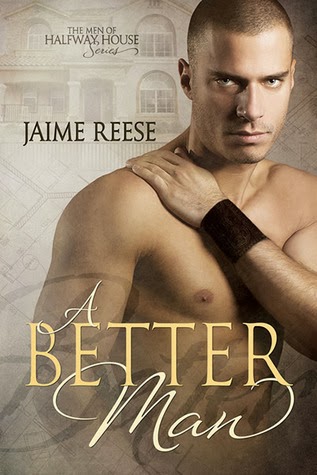 Matthew Doner is starting over. After a five-year prison term that alters every aspect of his life, he receives a bequest from his aunt with the stipulation that he use the money to make things right. Breaking free of the long-standing role he’s played and inspired by the few who support him, he decides to create a safe place where people like him can find purpose and start a new life.

Julian Capeletti likes challenges. He is confident, brash, stubborn, and just what Matt needs. Desperate for work after a downturn of luck, he accepts the job to renovate Matt’s crumbling building.

Over the course of a year, romance simmers between them as they restore the house. But there’s a bigger renovation that must take place in their hearts. To become better men, they need to learn to trust each other even with secrets and painful memories they fear may rip them apart.

As plots go, a main character being an ex-convict may not be palatable for many readers, including yours truly. However, one has to only read the blurb and realize that Matthew Doner is a man of secrets he is unwilling to tell. It drove me curious what this secret was and it was that which made me drop my usual thing and just read.

Julian "J" Capelletti is a talented and hard worker. He is also very imaginative. So when he answers the ad for a handyman of sorts who is basically described as an all-around-man-with-a-hammer, he did so with trepidation, but little choice. He needed the money and he needed the job. Seeing the job site firsthand, he saw the potential instead of a dilapidated building. As for the boss, well, that is why we have the romance between these two unlikely individuals.

The story spans a year and within that time, these two men learn each others' ways, personalities, weaknesses and strengths. They also learned to respect each other and eventually, the readers are seeing the two men 'court' one another. Living and working side by side, the men finally comes to terms and gave in to their need. Curiously enough, this was the intriguing turn of the plot which I absolutely loved.

As the men confirm their love for each other, the family issues come into the fold. Most central is Matt's mother who reminded me of someone and was true to form. She is really the whole drama here and was the root cause of Matt's issues. J had his own issues as well, however, nothing really was expanded from it and this left me hanging.

When I was asked if I had read A Better Man, I said that I had. When showed the cover, I immediately noticed that there was a difference: this is now a single author only. As I searched, I also discovered that there were quite a few changes made to this new edition. I have to be honest, the first edition did not make much of an impact on me.

Now we have this second edition and I was curious if the 'two-author' feel I got from that first book was still there. The good news is, although the plot itself remains unchanged, this one gave me a more cohesive feel. The story between Matt and J was more connected somehow and the drama that was the family, developed better. In a way, this is a much improved book. It reads much easier, truth be told, even if this is a story told from two points of views.

A Better Man, 2nd edition, is a beautiful, emotional and romantic love story between two broken men who find hope and home in each others' arms. It was a light, but drama-filled, read that made me tear up at some points, fist pump in shock, awe and admiration at one, and finally just smile and tear up once more.