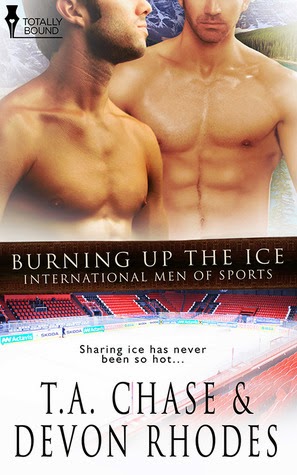 Book Five in the International Men of Sports

Two men, two very different sports and one rink—sharing ice has never been so hot.

Olivier ‘Big Bang’ St Pierre is back in his hometown while he recovers from being in the wrong place at the wrong time. Hockey’s a contact sport—still, he didn’t count on the locker room being dangerous. As a professional hockey player, he also didn’t count on it being hard to find ice time. But when a rink shuts down unexpectedly in a winter-sport-crazy town, even being a big name won’t help as people scramble for whatever they can get.

The first time Ethan Campbell hears from the local hockey legend he knew as a kid, Olivier manages to insult both his family’s rink and his new sport—curling. So he’s not exactly receptive when Olivier shows up in person to plead his case. He makes a sarcastic offer…and is shocked when Olivier takes him up on it. Ethan’s bad experience with hockey had left him cold. But soon he and Olivier are burning up the ice.

Ethan is tied to his town, job and family, while Olivier will be going back to Chicago to rejoin his team as soon as he’s able. It can’t possibly last…can it?

Burning Up The Ice is the fifth installment to the International Men of Sports series by authors T.A. Chase and Devon Rhodes. This is a fantastic duo of authors whose coming together has given us a delicious taste of men romancing men in the world of sports. When they first started out this series, it was unimaginable to think that these men would actually come out and enjoy their lives as they have the right to. Just the other day, another star athlete came out and it was a joy to see that this is now actually happening.

This is the story of Olivier and Ethan. Two athletic men whose one common ground was the ice rink. Olivier is a star defense hockey player while Ethan is a curler. Honestly, I had to go to YouTube to familiarize myself with the sport before I could go on as I had no idea what it was. After which, I started to enjoy this book more.

Accidentally injured in a locker room brawl, Olivier has to go through painful therapy to get himself together and after being paparazzi-ed to the max, he finally finds a quiet little rink in his hometown. Or so he thought. There he meets Ethan.

Ethan knew all about Olivier. Everyone did in his hometown. When he walks into his rink to ask for some private ice time, practically begging for it, Ethan could not say no.

And that was the start of a beautiful friendship which morphed into romance.

Who knew one could turn a Zamboni into a hot ride?

As the two men get to know each other, all the drama goes of and on around them. Thankfully, this was not happening in their budding relationship. Unless one had to think about the future. This, Ethan was scared of. When Olivier finally leaves, what happens next?