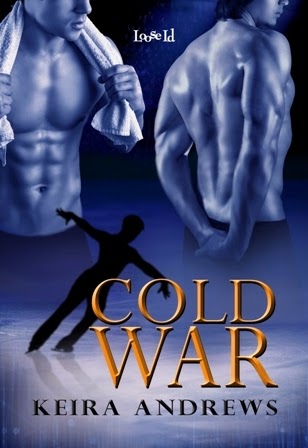 
After an explosive locker room confrontation with his Russian rival ends in the most surprising and intense sex of his life, American pairs skater Dev Avira needs to refocus. He’s worked for years to win Olympic gold, and he can’t let himself—or his partner—down. Distraction in the form of steely and smoldering Mikhail Reznikov is the last thing he needs as he prepares for the biggest competition of his life.

But with the Games only days away, they can’t keep their hands off each other. Dev soon learns that beneath Mikhail’s arrogant and aloof exterior is Misha, a passionate man who warms Dev’s heart and scorches his bed. They're both determined to win, but for Misha his freedom could be on the line. Can Dev put his deepening feelings on ice as he goes for gold?

Cold War is a timely read for me, especially with the Sochi Olympics ice skating competition going on and me watching. But this story is not about that event, this takes place four years later, when greats like Plushenko have retired (after I just saw him land those quads and winning the Gold for the fourth time).

This is the story between two male pair skaters. Unfortunately, for me at least, they are not the skating pair as they each have their lady partners. Dev is Team USA and Misha is Team Russia. Traditionally, these teams have had high drama and these two are not missing out on any of that. Thing is, the drama is on the ice, off the ice, and on the sheets.

The story read well and it had the right elements to make it an unforgettable romantic read. I was a bit disappointed in that this came out a bit short but then thought: what if this is exactly how the author meant it to be? It does end on an HFN note but with a huge potential. I ended up thinking and feeling more than I should have really for I so wanted their story to continue. This is only a hundred pages and it felt like it could go for another hundred or more. I hope the author does think about continuing their story for I have to confess: I fell in love with Misha. He is such a drool worthy sweetheart.

Overall, a light and short read with a huge potential for a bigger story and hotter scenes between two sexy men on the ice and off it.
Posted by multitaskingmomma at 8:13 PM