Review: Holding on to Hope by Sid Love 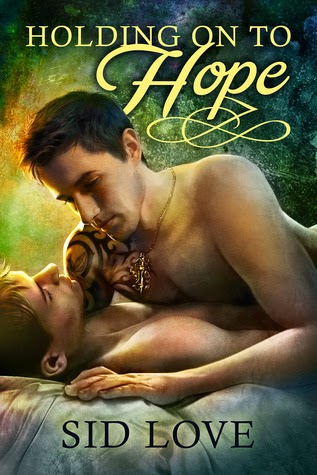 Bradley Parker has waited twenty years for Mr. Right, and on Valentine’s Day, he finally finds him. It’s love at first sight, and Brad even loses his virginity to the man of his dreams. But when he wakes up the next morning unable to remember anything—even what the man looked like—his best friend, Leslie, is convinced he imagined the whole thing. Brad knows he didn’t make up the best night of his life, but he has no idea of the danger he’s putting himself in as he struggles to recall the details of his perfect man. His search may lead him to parts of New York City he never dreamed existed and a war being waged in the shadows.

I found myself mulling over this review for several hours. I would rate it then change my mind, then rate it again, then change my mind again. I could not honestly put the rating I wanted to simply because this was a totally unexpected story with an unexpected ending told from the point of view of one unexpected character. I finally ended up reading it again to make sure I was doing right. So here I am, read it twice and found that I had changed my mind once more. So this review is really a third and fourth impression. Not my usual firsty.

This is not formulaic. Far from it. This is short, the story coming fast paced, the characters not so well developed because of its short length and yet..... This was a story that was strangely intriguing and curious.

We have one Bradley Parker who seems to be left out in all things relationship-wise. Then one day, he just up and calls best friend Leslie and tells a wondrous tale of losing his virginity. Curiously, he cannot seem to remember the details but the feelings he could not ignore. He is in love but with whom?

As the two best friends seek out the who in that night of erotica, they stumble into a dark reality they never thought existed except in movies.

The story is short and fast but the development was clearly apparent. I found myself really wanting Sid Love to just give us a longer version and yet on the second read, I was satisfied. The ending was a bit of a turn from the usual and that confused me a bit. Then again, it was just so fitting.

If you like short stories with some bit of action and paranormal loving, Holding On To Hope is a great way to read once, twice or more if you feel like it. I loved it the second time around.

Posted by multitaskingmomma at 1:00 PM