Review: The House on Hancock Hill by Indra Vaughn 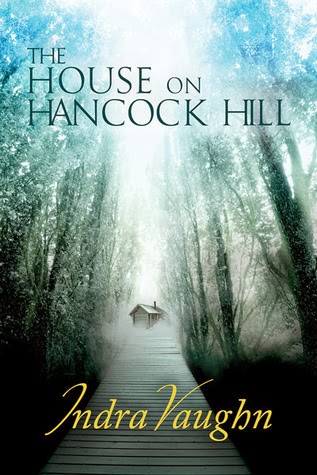 Pastry chef and bakery owner Jason Wood bakes a mean chocolate soufflé, yet his love life keeps falling flat. He’d blame his past if he wasn’t trying so hard to avoid it.

When his family’s farmhouse burns to the ground, he’s summoned to identify a body found in the ashes. Jason returns to Hancock, Michigan, and reunites with a childhood friend, small town vet Henry McCavanaugh. After fifteen years apart, their rekindled friendship soon develops into much more. But Jason’s baggage threatens their blossoming romance, and he leaves town unannounced to escape his feelings—and Henry’s feelings for him. He has learned the hard way if something seems too good to be true, it’s best to run for the hills. Jason stress-bakes more confections than he knows what to do with before wondering if he’s running in the wrong direction.

The House on Hancock Hill is one of those books where all the elements needed in a great romance are present. What makes this stand out is that author, Indra Vaughn, managed to tell her tale of romance found, lost, and then found again, beautifully. The story never went over board in the drama and cheesiness factors.

Jason Wood is a chef who finds himself in a hospital after an accident he had in the middle of a lonely road in the middle of nowhere. He could have frozen and died without getting discovered, but he was. His rescuer was someone familiar but could not name.

Henry McCavanaugh is a vet. When he discovered a man unconscious in his car in the middle of a white out, never did he expect it to be his childhood friend and secret love, Jay (or Jason now that he is older).

As the two men start their friendship once more, they discover things in each other they never expected. Jason has to stay and heal but he soon realizes a love for Henry he never thought to have. Unfortunately, he has to go back to his business and Henry has to stay on. There is also his past that he can't get over from. Knowing their relationship will just end painfully, he leaves. What he never expected was a pain so deep he stresses out and it starts affecting his work, his judgements and his health.

The story that unfolds is nothing like the usual. Here we actually have a whole lot of relationship building between the two men. They make bad decisions, they keep secrets that ruins their judgements, and they learn who they are.

As the men grow and mature, they learn more about who they are and what they can be together and for me, this is the most beautiful part of the story. They learn slowly and surely, and as they are learning, they grow more. With their newfound knowledge and acceptance of who they are, they find a love that could be forever.

For all the drama that unfolds, this was such a suprisingly light read that left me with a satisfied smile and a knowledge that these two men will make it.