Review: I Love It Rough by Michael Mandrake 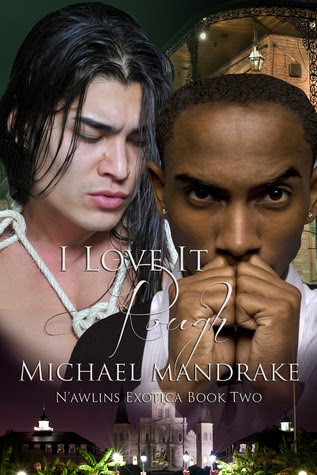 Livin’ in N’awlins ain’t all that easy…

Kajika Fortier loves his job, the attention he gets from onlookers, and Frankie Choteau. However, his new partner’s jealousy, mood swings, and over protectiveness drives Kajika to the brink but at the same time, excites him to no end.

To complicate things further, a murderer is on the loose looking for blood. All three of the killer’s victims are strippers which not only makes Frankie nervous about Kajika’s safety but leaves him questioning his love for being a homicide detective. Coupled with the stresses of cold cases as well as some fellow officers shunning him for coming out, Frankie is having second thoughts about staying in New Orleans. Despite the encouragement from Vance, Kenina, and Orrin as well as new chief Quinn Murray, Frankie is wondering if his life’s passion really is to catch the killers.

Will the new couple survive these new issues that impede their nearly perfect union? Or will the relationship fail, thus leaving Kajika alone and a target for New Orleans latest serial killer? Detective Choteau and Kajika’s commitment to one another is being tested in more ways than one and they only have one another to lean on.

I Love It Rough continues the story of exotic dancer Kajika and his lover, Det. Frankie Choteau. Where the first book, I Like 'Em Pretty, was more of a telling of how the relationship between these two men began, this one is about their relationship breaking down. The time when each man start questioning their roles in their relationship as well as their willingness to compromise. Could this be the turning point of a romance that should have been the forever kind?

Frankie is having second thoughts about his job as a police detective. It is not really surprising for he had been on the verge of a burn out. He sees no way out from all of the violence and tragedies happening on the streets. He sees no good developments in the cases that have struck him personally and it is hitting him hard. His first reaction is to protect his Kajika. He wants him to quit working as a dancer, stay at home and be there when he comes home late.

Before he could say anything, tragedy strikes. Lana, a long-time friend and mentor of Kajika, is found murdered in her apartment. Scared and feeling over-stretched, Frankie voices out his demands to his lover. Obviously this was not a good idea as Kajika lashes out in rebellion then ups and leaves.

Their relationship had reached an impasse. This is when the story turns from the ordinary to the... paranormal.

As each man go their separate ways, we find Kajika discovering something strange. He had encountered not one, but two of himself while in New Orleans and had thought of the sightings as his imagination gone amok. But then, he encounters this supposed apparition in the form of an uncle, or rather, four times  grand uncle, Ryland Durand.

Who just happens to be an immortal. A vampire.

Kajika and Ryland start getting to know each other and talk about their shared family history. And Frankie. Before long, Ryland shows Kajika what his role as a lover and partner should be.

On the other hand, we have Frankie doing much what he usually does: investigating. Waking up to a missing Frankie who does not return his calls, his despair turns to anger and soon, he is his 'normal' self and realizes that he is an effective investigator and was better off as one. Not too long after, he receives a tip on a soon-to-be-cold-case that takes him out of town and accompanied by Orrin, a young detective he had always found attractive. While on their trip, the heat turned up and what should not have, happened. Or rather, almost did.

As the separate stories of Kajika and Frankie unfold, readers are treated to a supporting cast characters and developing sub-plot. In this sub-plot, that irritating presence of Kenina Porter is still irritating, there is the introduction of a new police chief making changes in the precinct that will greatly affect Frankie's job, and then there are Orrin and Vance. Kanina is the curiousity. She plays an important role in the arc. What it is? No idea. It will be revealed.

Michael Mandrake has written an exasperatingly frustrating second installment that leaves its readers wanting for more. This has a surprise ending, one which screamed of a third book. I want to know what Frankie's next move is going to be; how the whole Orrin affair is going to play out; how Kajika is going to react to the development in his relationship with Frankie; and finally, what or who is that killer out there on the loose and still doing his thing.

My initial reaction after reading this story was one of surprise and frustration. However, as I was mulling over the turn of events and the way the two stories developed, I realized that my reactions were exactly what the author wanted. He touches on subject matters that no one really wants to face and he did handle this well. Now all we need to do as readers is: wait for that third installment.

Note: Review based on eARC provided by author.

Posted by multitaskingmomma at 4:06 PM