Review: Objects in the Rearview Mirror (Memoirs of the Human Wraiths #2) by F.E. Feeley Jr. 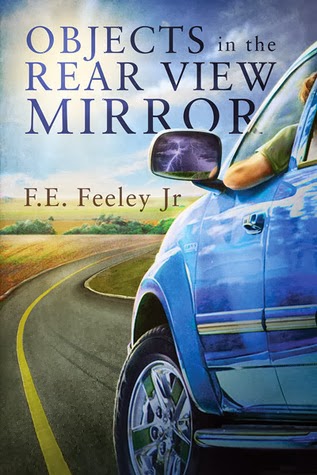 Memoirs of the Human Wraiths

Their new home on Frederick Street in Clay Center, Kansas, was supposed to give writer Jonathan David and his husband, clinical psychologist Dr. Eddie Dorman, an opportunity to enjoy married life. Jonathan has just released his first major bestseller, and he hopes to finally escape his traumatic past and find the quiet existence he has always craved. Eddie has taken a job at the Kansas State University psychology department, and they intend to begin anew.

They have barely settled in when the nightmare begins. Noises, disembodied voices, and mysterious apparitions make Jonathan’s life hell. Part of the house has decided to bare its teeth, show its jagged edges, and bring back the worst of Jonathan’s past. At first, Eddie cannot perceive the spectral events and fears for his husband’s sanity. When he’s also affected by the haunting, he’s unsure of what to do but refuses to be beaten.

Together, they seek a way to fight the forces trying to tear them apart. The world is a frightening place, but confronting their fears plunges Jonathan and Eddie into absolute horror.

This was one INCREDIBLE read!

Objects In The Rearview Mirror, the title, sounds more like a psychological drama than a story of haunting. Once the reader gets deep into the story, they see that what the author,  F.E. Feeley Jr., did, was to combine the two. As well he should. For what is a ghost story that is not really a psychological drama in disguise? A haunting is really a reflection of the demons we all lived in that crosses over to the paranormal state of hell as we imagine it.

In this story, we have husbands Jonathan and Eddie who move to Kansas to basically start their life over after years of struggles. Jonathan, a successful author, has a few issues to deal with being a veteran of war and a child abuse survivor. Eddie has just been awarded a job in the KSU psychology department. They have just bought a new house, they spend time redoing the place and were in the middle of enjoying a new life when things that bump in the night started - well - bumping. Thumping.

Just like any normal and healthy individuals, they blame the thumps and bumps to noises that come with old houses. They relax a bit and when things calmed down, things get more normal.

Then it started all over again. Stronger at times and disturbingly scary at others. When the men start questioning their sanities without confiding with each other, this is when things start escalating. As they finally face their paranormal realities and search for answers that would get them out of the mess, it may be too late. They are facing an evil force they may not escape sane.

It is hard writing this review without getting to spill spoilers that may ruin the impact of the read. Feeley has written an intense psychological thriller laced with paranormal and ghostly goings on that can send chills down the spine, cause my hands to tighten on my poor ereader and my teeth to ache from gritting too hard. There were points where all I could do was just hold on to the reader and just plow through this.

This is a highly visual and auditory read that it was quite difficult to get myself out of the scenes unfolding clearly in my mind's eye. The technical aspects of the hunt was so well written it brought back memories of when I had to study for the course in school. The psychological backgrounds to the fears of the men and the ghosts were all so well twisted and integrated together it was just incredible.

As for the haunting?

Make sure to read this during the day. That is all I am saying.

Posted by multitaskingmomma at 3:57 AM