Review: Pick Up the Pieces (The Light in Your Eye #1) by Tinnean 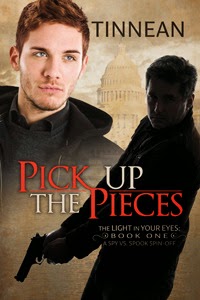 Pick Up the Pieces (The Light in Your Eye #1)

The Light in Your Eyes: Book One
A Spy vs Spook Novel

Fifteen-year-old Theo Bascopolis longs for the man of his dreams. But his dreams are dashed when his conservative Greek father discovers Theo is gay and throws him out. Hopeless, he falls in with Fast Franky, a pimp who seduces Theo with the nickname “Sweetcheeks,” but abuses him and wants Theo to hustle. A bloody fight with Franky forces Sweetcheeks to run. Winding up in Washington, DC, he meets a group of rent boys who take care of each other. While he may not have the man of his dreams, Theo finally has a home and family of his own making.

When the boys take in mysterious tenant Mark Vincent, he seems a solid protector, until one of Sweetcheeks’s boys suffers a savage beating in his name. Vincent visits the boy in the hospital and introduces his equally enigmatic trainee, William Matheson. The instant attraction blindsides Sweetcheeks. In spite of knowing love isn’t for rent boys, Sweetcheeks hopes Matheson sees beyond the body he’s offered to so many. But Matheson has secrets of his own, and both will have to tear down their walls to find enduring love.

Pick Up The Pieces is the life story of one Theo Bascopolis, from the time he gets kicked out of the house for being gay, to the time where he seems settled with a first love, William Matheson.

It begins when Theo is 15 and he gets picked up by a seemingly good Samaritan who feeds him, clothes him, loves him. A young boy, he was scared of being out and alone but the situation was just getting worse and when it finally escalates into violence, he defends himself and runs. By this time, Theo is known as Sweetcheeks, a beautiful and charismatic rent boy. By some twist of fate, he meets a stable of boys run by a conscientious older boy who makes sure they are all fed, healthy and never get involved in violence or drugs. As the years unfold, we see Sweetcheeks taking over the stable and investing its well earned monies.

Thanks to their highly influential clientele, they are able to purchase a home which extra rooms and space could be rented out. One of those who take the room upstairs is Mark Vincent. An enigmatic man whom they respected and feared at the same time. Soon, he proves himself worthy in their eyes and they become friends. When one of the boys gets beaten up in Vincent's name, this is when things get interesting. At the hospital, Theo meets Vincent's colleague. One William Matheson.

Theo cannot explain it, but meeting William or Wills, opened his eyes to the possibility of finally dropping his chosen career as a rent boy and finally get to have a normal life. Wills does not really know what to make of Theo at first, but soon, he embraces his attraction to the young man. As for Theo, he 'believes' Wills is a computer troubleshooter. No matter he packs a gun when going on his troubleshooting trips. The important thing is that Wills comes home, introduced him to his family, gave him a whole family who loves him, and loves his cooking.

Although the setting to this story is in the late 1990's to the early 2000, a blast from the past reading about VCRs and TV shows long since cancelled, the story itself is timeless. Theo is a very strong young man who has met the worst and the best in his situation as a rent boy and the romance between him and Wills itself is very strong.

This is really the story of Theo, how he fought to gain his identity, his survival on the streets and eventually run a stable of boys, and his recognition of a love in a man who may not be at all what he pretends to be. Told from Theo's point of view, we see a young boy turn into a man who reinvented himself and knew when to quit. As for Wills, he is a mystery and readers will never really know who and what he is.

To know more of their story, we have to wait for the second installment. To know more about Mark Vincent and Wills' mysterious work, one needs to read the Spy vs. Spook series.