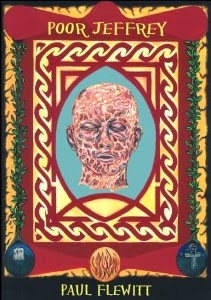 Grief drives people to extreme behaviour, and when Poor Jeffrey Kinsey is killed his friends go to some extreme lengths to bring him back… sometimes the magic works.
When Cal Denver comes to town and girls start to disappear, only to be found half eaten by an unidentifiable creature; some townsfolk will panic and flee… others will get angry or go insane.
For Tommy, Jade and Chloe the next few weeks will make them or break them… and a story begins…

Poor Jeffrey; he never wanted death to be this way…

Jeffrey, Tommy, Chloe and Jade. Jade was relatively new to the group, not having grown up with the other three, but she loved it they accepted her as sister and friend. For Jeffrey and Chloe, young love was in the works. As the other two look on, they smile at their two friends' budding romance. Not one of them wanted to let each other down. They each had the others' backs.

On a night that should have been spent studying for exams, Jeffrey trips, falls on the side of a road, gets hit by a truck and dies. The events following his death, and the resulting grief of his three remaining friends, begin the dark tale of base human compulsions and an evil that lurks in the shadows.

Tommy, the best friend who shared a common bond of losing an older brother, felt the most guilty. Trying to overcome his grief and inexplicable guilt, he turns to a grimoire and attempts to bring back Jeffrey. He solicits the help of Chloe and Jade and, poor Jeffrey, the attempt worked. In a very sorry way.

Jeffrey was now a walking cadaver. He can think, speak and still lend wisdom. What to do about his rotting body, now that is another thing entirely.

As the guilt and grief overcome the three surviving friends, a young mute girl disappears. This spearheads an investigation by the local police. Then Chloe disappears.  Eventually, the FBI are called but are met with dead ends wherever they turn.

Chaos and anarchy start ruling the town and the killer makes his move on the available young girls around. As more and more bodies turn up, the killer is out and amongst them, gleeful in his anonymity.

This was supposed to be a simple zombie horror story. Instead, we have a zombie, experimentation with witchcraft and necromancy, cannibalism and dark spirits.

It can be very simple to write a review when all one has to do is relive the events of a story. It is downright difficult and disturbing to try and relive what happened to Poor Jeffrey, the town, its people, and the young friends.

Through this, we will get to know Cal Denver. The evil that is this creature is truly and remarkably depraved, yet fascinating. What kind of evil he truly is, we only had a glimpse, but it was enough. The horrors that unfold during his stint in this town is truly unforgettable and horrifying.

Paul Flewitt's style of writing is curious. His tale of horror is a surprisingly light read but it's grip on the mind is strong and it never lets up. The vivid imagery tells a tale that is more than what it truly is. He cajoles his readers, telling them to hold on and to keep reading. Readers will hold on, will keep reading, and will keep visualizing.

Poor Jeffrey is terrifying. It's calmly told tale of grief and the extent to which people will forget right from wrong to overcome their emotions, gives insight on just how low people will go for their own personal gratifications.

It's even calmer telling of the murders and killing... now that is even more horrifying.