Review: Prince Snow and His Snow King (A Tail Like No Other #7) by Scarlet Hyacinth 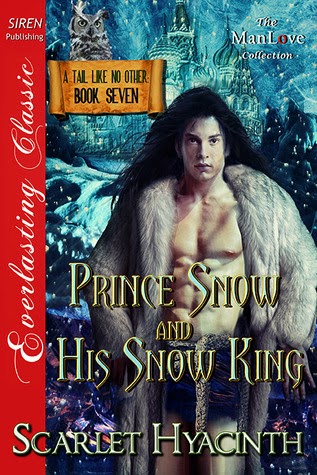 I’ve always dreamed of a true mate, a handsome prince who’d sweep me off my feet. Somehow, he never found his way to me, not until now.

A mysterious curse struck at the wedding of my Arthurian friends, turning everyone—except me, Prince Snow of Morganna—into animals. The culprit? My mate, an ice mage known as the Snow King.

Despite my wariness, I agree to go to him in exchange for my friends’ freedom. I don’t expect to enjoy living in his ice palace, to care about his owl and his wolf, and to fall in love with him. But the Snow King—Frost—makes me laugh, frustrates me, protects me, and makes me hotter than the fiercest fire. How could I resist him?

Sadly, Frost has a secret, and when that secret is revealed, we are parted in the most brutal manner. Will we find our way back to each other or will our love be crushed by the unforgiving, cold truth?

I think I may just be the only one who messed up big time. I finally pick up a Scarlet Hyacinth and I got the last book of the series. It does not matter, I was in the mood for a Ms Scarlet and my face is grinning so bad!

Apparently, as I am the last to know (duh!), this is the last of the A Tail Like No Other series. There are six earlier books, all of which I have not read. This is the story of Prince Snow and him finally getting to meet up with the frightening King Frost despite all of the attempts to circumvent that dreaded event.

This book opens to a wedding that starts off fun and happy and acted as a reunion of sorts. In comes a gift and sensing that something was amiss, the witch Anelah blocks a powerful spell and they all turn into animals and insects. Except for Snow.

This dastardly act was the deed of only one individual, they all surmise: King Frost, the Snow King.

Who just happens to be Snow's fated mate. Leaving him to 'sacrifice' himself and make a deal with the powerful and 'evil' man to save his friends and family.

So off they went to a meet and greet. The deal was made and Snow is left in the ice castle ready to meet his fate.

This was such a fun, fun read. This was just the perfect balm for my need to have a bit of whimsy, a bit of fluff, a bit of fairy tale that never fails to amuse me. And even if I read the last book to the series, I was not in the bit lost. There was enough of a backstory inserted within that made it so easy and light. It never made me confused. This is not surprising at all for the author has this talent for making an ongoing story of seven books come out like each one was a stand alone. Add in the element of mpreg! and I am stoked.

For those who love the bit whimsical for just a few hours, who love to submerge themselves in an effortlessly told story of fairy tale romance between two really beautiful men, this is the freezingly HOT! book for you to smile over.
Posted by multitaskingmomma at 9:47 PM