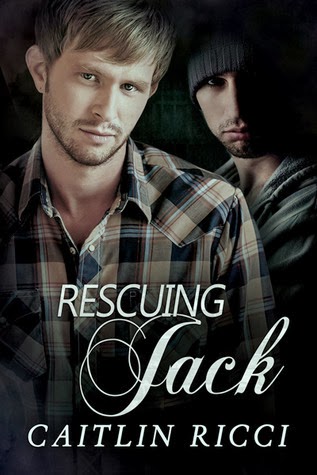 Werewolves are real. Marius enjoys the irony that everyone calls him a dog whisperer, not just because he’s a werewolf, but for his work at the local animal shelter. He has a unique talent for pairing families with their perfect pets upon first meeting them. But he’s still looking for acceptance and a forever family of his own. Then Jack comes into the rescue looking for a big, mean dog. To prevent Jack from making the wrong choice, Marius convinces him to adopt a needy spaniel mix instead. But when Marius learns Jack is tormented by horrible memories while at his apartment, he opens his home to the sweet, scared man. As their relationship grows, Jack feels comfortable telling Marius about the horrors he suffered. Marius hopes his steady presence, protection, and love can help Jack reclaim the pieces of himself broken on that terrible night.

Rescuing Jack is set in a Utopian world of contemporary America where werewolves came out of their proverbial closets of forests and revealed their existence. They are assimilated to the society, they are accepted in communities, and they are victims of racial/species bigotry.

One such werewolf who came out was Marius. His revelations cost him quite a few friends but is now living a life doing a job he loves to do: rescuing animals and finding families for them. He has a talent for finding just the right matches and through the years, gained quite a few newer friends and supporters.

Jack walks into the shelter looking for a huge dog. He is quiet, downtrodden, a victim of what, only he knows. As he walks through the aisles looking for a huge and mean guard dog, Marius leads him to a small, obviously traumatized dog. He just knows they are the perfect match, but knows he has a lot of work in front of him as both Jack and dog reject each other for reasons all their own.

As the two men and dog get to know each other, it is quite apparent to all that there is an attraction there that is not just dog related. Soon, the two learn about the other, accepting, and finally loving. The complications of Jack's recent past keeps haunting him, though, and it is painful to see. Fear, distrust and anxiety are taking their toll and now it is up to Marius to slowly and delicately chip the barriers away and find the core of Jack.

The story is beautifully romantic and the need for Marius to comfort and heal Jack was very much at the forefront of the story. Jack's pain was very, very painful to read at times and it was a good thing the author handled this delicately. As the past unfolds, the painful events led to certain revelations of the were world. Things that were never made public.

The abrupt ending frustrates, saddens and makes me curious. There is something left out of the story, a mystery that is sure to be revealed in a succeeding installment. Yes, we are left with the fact that Marius and Jack are going to make a good go at life, but in the future. This is the frustrating part. I need the next book!
Posted by multitaskingmomma at 12:50 AM