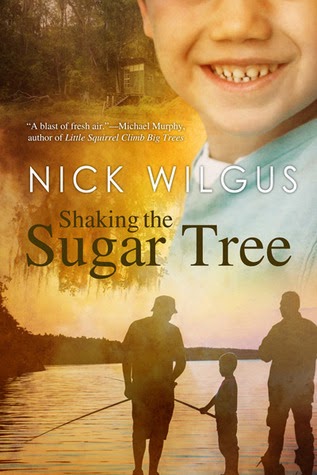 Wise-cracking Wiley Cantrell is loud and roaringly outrageous—and he needs to be to keep his deeply religious neighbors and family in the Deep South at bay. A failed writer on food stamps, Wiley works a minimum wage job and barely manages to keep himself and his deaf son, Noah, more than a stone’s throw away from Dumpster-diving.

Noah was a meth baby and has the birth defects to prove it. He sees how lonely his father is and tries to help him find a boyfriend while Wiley struggles to help Noah have a relationship with his incarcerated mother, who believes the best way to feed a child is with a slingshot. No wonder Noah becomes Wiley’s biggest supporter when Boston nurse Jackson Ledbetter walks past Wiley’s cash register and sets his sugar tree on fire.

Jackson falls like a wet mule wearing concrete boots for Wiley’s sense of humor. And while Wiley represents much of the best of the South, Jackson is hiding a secret that could threaten this new family in the making.

When North meets South, the cultural misunderstandings are many, but so are the laughs, and the tears, but, as they say down in Dixie, it’s all good.

While the rest of the world have gone the politically-correct path, Nick Wilgus, contrariwise, flips a finger and gives us a no-holds-barred and in-your-face taste of the South meeting North and other unmentionables!

I recall my grandmother giving a lecture at the table when once we kids went the merry path of Wiley and Papaw: "There are topics which should never be brought up nor discussed in polite company (including family) especially while dining: politics, religion and sex." Well, throw that wise advise out the window and get ready for the ride of a read.

To tame things down, we get the drama that was little Noah and his growing-up-blues but this was treated so brilliantly light, easy and so just matter of fact that there was really no drama to it. It felt real. It was life.

To add a bit of angst, we have the situation that was Noah's mother and her parents. Fortunately, instead of ruining the story, it was done very, very well. Yes, it put a damper on everything and sometimes it brought up such feelings anger that, for a while, the romance was completely forgotten. Then, it goes the humorous path once more.

One cannot really label this as a fluffy, ubersweet and sappy romance. This is not even erotica. This was more like a statement through storytelling, and it was so perfectly done.

This is a romance, yes, but the message was more than the romance. This is a political statement in the guise of romance. It can be hard to read at times and it can get so up close and personal. But just like anything controversial, it is also very hard to put down. The need to know what comes and is said next, outweighs all things else.

Nick Wilgus wrote a story about a working man raising his son all by himself and the money is hard. Very hard. They make do and they do it well. He meets another working man, Jackson, and they hit it off. Jackson has his own secrets and when Wiley discovers it, he did not like it, did not appreciate it, and made ready to clear out. As this is a romantic love story, it does end the way all fiction does, with an HEA.

The author appears to lack a sense of fear, in writing this piece, and it is this very sense of fearlessness that made the story work perfectly. This can be a real wake up call for others who may not be prepared, so it can be difficult to finish.

As for me? Well I just loved it, contrariwise and politically incorrect this may be. Posted by multitaskingmomma at 3:46 AM