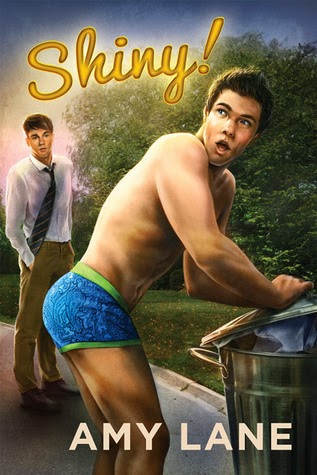 Will Lafferty and Kenny Scalia are both having sort of a day. Will gets fired for letting fifth graders read Harry Potter, and Kenny finds his boyfriend and his sex toys in bed with a complete stranger. When Will knocks over Kenny's trash can—and strews Kenny's personal business all over the street—it feels like the perfect craptastic climax to the sewage of suckage that has rained down on them both.

But ever-friendly, ever-kind Will asks snarky Kenny out for a beer—God knows they both need one—and two amazing things occur: Kenny discovers talking to Will might be the best form of intercourse ever, and Will discovers he's gay.

Their unlikely friendship seems like the perfect platonic match until Will reveals how very much more he’s been feeling for Kenny almost since the beginning. But Kenny’s worried. Will’s new-found sexuality is bright and glittery and shiny, but what happens when that wears off? Is Will's infatuation with Kenny strong enough to stay real?

I was looking for something light, easy on the heart, funny, romantic, maybe a bit of the ridiculous. I saw this title and said: this is different. I took the chance.

I laughed my way through this from start to finish, but I did tear up a bit at the end. It was just soooooo, oh so, romantic! Without drama, angst, frustrating details, or whatever else that can put a downer on things.

Folks, this is an Amy Lane! Who would have thunk it????

One has to just pick up this book and experience the read to know what I am talking about here. The scenes were so ridiculous, they were real. The lines so cheesy and queenie, they were hilarious and yet so real. The bitchslaps, oh, those bitch slaps were to kill for! And then the sweetness....oh dear, how sweet can one be? and yet? it was real.

What we have is one flamboyant Kenny Scalia who walks in and ... eeewwww, I won't write it, it cannot be described! Let us just say, it was pretty over the top disastrous but Kenny's reactions and actions were precious! So, out the door goes his now-ex and just as he thinks that his day was about to be over? In comes, or barrelling through the garbage can, Will Laferty.

Will had just been fired by an, hmmmm, sanctimonious bitch of a principal, for broadening the minds of his young wards. Mortal sin of all sins: he made them read Harry Potter! Yep, HP itself. Where's the holy water?!?! Rattled, he runs smack on the garbage filled with such - Shiny! - things he does not realize what they were until he had picked up a few, glance up and sees Kenny, and - eeeewwwwww! what did he just pick up!?

That was the beginning of a beautiful friendship, and the beginning of such a fantastic read. A friendship they never thought they could have. This friendship opened doors to a whole lot of self-acceptance, new knowledge, experimentation, taking chances, and risking their hearts to find love.

The whole story is told from two points of views, but both tell the tale to a good friend at her wedding. It was a beautiful wedding gift, as gifts go, it was personal, it was heartfelt, it was romantic and sweet, and filled with laughter. When the day finally ends, both men go home to their own nest, and begin the first day of their happily forever after lives.

This was just what I needed. Super angst-free romance filled with much laughter and the ridiculous.
Posted by multitaskingmomma at 5:01 AM