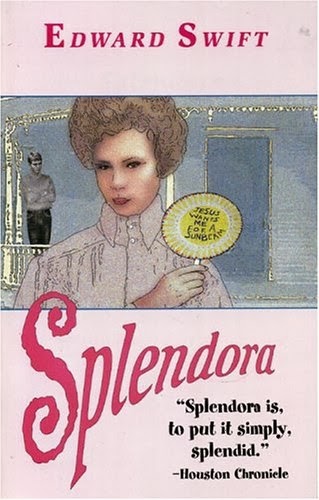 Splendora a steamy little East Texas town, is the setting for this rollicking tale of Timothy John Coldridge and Miss Jessie Gatewood, two people who couldn't be any closer. But Timothy John and Miss Jessie are hiding a secret--one that, if discovered, will rock Splendora to its very core.

There are so many stigmas attached to cross dressing and/or transvestism. Those in the not-know-how may even go so far as saying that it is a form of insanity. Edward Swift's take on this taboo subject made me realize that not all really could know what is going on. He did go to some lengths that were funny and kind of ridiculous, but then it made me think that those who read this may just assume the worst.

This is a novel about a small town's small-mindedness and how gossip can get out of hand, out of mind, out of body and just be plain crazy. Timothy John Coldridge was a boy who grew up in the small town of Splendora but left it with a heavy heart and never to be seen again until he returned accompanied by Miss Jessie Gatewood, the new mobile librarian.

The conversations going on between these two individuals showed just how close they were, how they loved each other and maybe even more. It is soon apparent to the reader that they are one and the same but no one in town knows this. They actually think the two are more than what they appear to be. Not in a cross dressing way, mind you. But something else.

They need to discuss this and settle on what that maybe, may be.

There were times I felt uncomfortable reading as I was dreading how the town's people would look to Timothy and Jessie. There were so many misunderstandings going on and many of these were ridiculously written to the point that many who do not understand may laugh it up and just say, yes! There were also things written here that 'confirmed' the so called 'insanity' of cross-dressing especially when Timothy and Jessie conversed with each other as if they were two different and separate individuals.

But then love came out of nowhere. The conflicting beliefs and feelings turned, twisted and tangled with each other. There was no obvious way out and soon it was a choice of whether to be Timothy or to remain Jessie. Forever. It was a hard decision to make but it had to be made.

Thing is, how to make that decision and not clue in the gossiping population?

Edward Swift brilliantly wrote about how the world saw cross dressers and how small town mentalities can escalate situations to ridiculous lengths, widths and heights and yet deny what is right in front of them for the sake of denial. This was so right on target that it is impossible to say he was off his rockers and so I could not just ignore this.

Swift was able to depict remarkably well how narrow minded so many people were and still are. I was really in awe with how he depicted Jessie feeling the hurt when looked upon as a woman and simultaneously, we have Timothy looking to himself as the deceiver.

Splendora is a town that no longer is and yet this story using it as the setting is as real today as it was then. This may have been written at a time when no one could really make a definitive diagnosis on what cross dressing was really all about but the story that unfolds is timeless. This was a difficult read, then again it was not, so I could not find it in me to put this down.

As for the town's people? Well, they do say small minds are stagnant, right?

Posted by multitaskingmomma at 7:00 AM