Review: When Will I See You Again by Julie Lynn Hayes 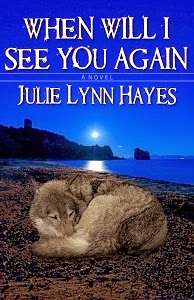 Raoul Marchand is the crown prince of Charisma, the infamous night club in Crescent Bay, renowned for its supernatural clientele. He has the pick of any and all men, but he cares for none. He uses them and throws them away again, and has done so for some twenty years, in the aftermath of a tragedy that robbed him of what he loved most in the world.

Alexx Jameson is an idealistic would-be reporter with the Crescent Bay Chronicle. Presented with an opportunity to write a story on the Marchands, he eagerly grasps the chance to be a real reporter. His friend, Chronicle receptionist Miller Fenwick, suggests they go to Charisma to do a little research. Alexx isn’t sure that’s such a great idea. After all, he’s still under age, being only twenty. No problem, Miller can fix that! Added bonus, there’s a full moon tonight.

When Alexx first encounters Raoul, it isn’t exactly in the way he dreamed of, and he’s sure he made a terrible first impression. But Fate throws them together under unforeseen circumstances, and the attraction between them can’t be denied.

Can Raoul let go of the past long enough to find his future with Alexx, or is he doomed to repeat past mistakes?

When Will I See You Again is a title that speaks of loss; couple it with the image of a lone wolf curled up on a sandy shore, and it speaks of loneliness. It sets the mind to wonder on the hows, the whys.

The book opens with wolf shifter Raoul and his beloved Jamie secreting to their special place, happily loving each other, dreaming of a future. As the tides shift, we read of Raoul's loss and the heartbroken lone wolf emerges.

Twenty years later, we see Alexx, a young man whose dream is to be an investigative journalist but is currently working in the mail room. An opportunity lands in his hands and he knows if he does not take it, risk all, he would never see his dream to fruition. Accompanied by an older friend and a fake ID, he enters Charisma, the famous supernatural night club run by Raoul.

When the two meet, there is an immediate connection; an attraction that is palpable but cannot be acted upon. Unexpected events turn the tables against the two star crossed lovers and now Raoul finds himself under Alexx's control and protection.

As the two would be lovers race against time to find discover who set Raoul up for murder, they find it hard to resist their attraction. Raoul's past continues to haunt him but he cannot hold back his feelings for Alexx who is more than what he is.

The story of love lost and found has been the subject of many a writers' works. Julie Lynn Hayes successfully captured the heart of this plot through her story of romance between a man, a shifter and a hope for a second chance.

What really caught my attention was her integration of the canine personality in the case of Raoul who would be all man then would shift to an alpha male who'd experienced the loss of a beloved. He would, at times, be hesitant and fearful and then be turn protective, strong and decisive. He bowed to the wishes of the man he loves, showing his strength as a partner and as a lover. He was never ashamed to show any weakness to his Alexx, showing his determination to be that partner he deserved. Faithful. Loyal. Loving unconditionally.

A murder mystery based on unrequited love gone sour, this is a beautiful love story that can wring the emotions out of its readers and then make them smile at the discovery of a new (old) love.

Posted by multitaskingmomma at 6:34 AM