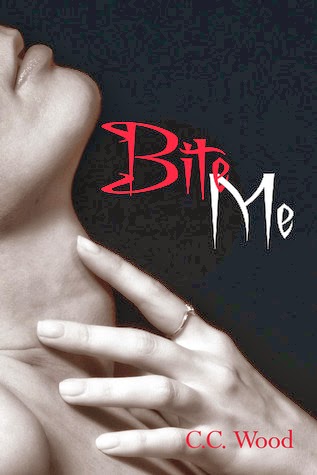 I had the perfect life; an awesome job in advertising, a gorgeous high rise apartment, and a flirtation with the guy down the hall. Then it all came crashing down. Two months later I was a cocktail waitress living in a tiny one bedroom apartment. I had also developed a serious ‘men suck’ attitude.


That all changed the night I met the beautiful and enigmatic Conner Savage. But there was just one little problem…he said he was a vampire. Figures a man that hot would be batshit crazy. Or so I thought. It didn't take me long to realize that Conner wasn't a nut job and that I was addicted to him.


With every moment we spent together he drew me deeper into his world and the supernatural culture in which he lived.
Now I had a choice: the vampire I craved or a normal life. Couldn't be easier, right?

The fact that I read C.C. Wood's Bite Me after her second book in the Bitten Series didn't get me disappointed. I'm enlightened on why the characters in the second book acted the way they did and it endeared me more to Conner and Donna - especially Conner!

Donna is a highly opinionated, strong, passionate, modern woman. Her assertiveness is what gets her into trouble at work and she finds herself waitressing in a bar just to make ends meet. It's at this point in her life that she meets Conner when he saves her life from some drunks that wanted to "play" after she got off work.

Conner is your typical Alpha male stuck in the world for several centuries. Given how he thinks, it would be akin to having Lancelot pop up in this century. What would he do if he were faced with a modern woman who was as strong-headed as Guinevere but made full use of all her rights and strengths, too? Poor guy. No wonder Conner had a perpetual migraine after meeting Donna!

Her BFFs are a conglomerate of characters on their own. Wise and wise-cracking, they make Conner's hair stand on end yet he can see how much they care for Donna, which makes him care for them as well. His friends aren't chopped liver, either. Makes me wonder - is there a law against creating ugly vampires? Hmmm.

There is the same play in the storyline that I fell in love with in Once Bitten, Twice Shy. Villains appear unexpectedly, people you'd love to hate turn out to be completely wonderful, and there is a villainESS, not a villain.

Are there nods to earlier series? Some, but nicely woven into the story that you wouldn't really notice unless you look for them. Honestly, it would be really tough to put a wholly original spiel on a vampire story, especially since most are based on the first, classic novel. How CC Wood chopped them up and blended them together made for a surprisingly refreshing take.

I only have one complaint here. The high point of Conner and Donna's relationship went out with a wet sizzle. I would have loved a little more on exactly how they ended up together instead of a simple paragraph that went on to the next chapter. They had such a torrid affair, why wasn't there more?

But I did enjoy the ending, as it morphed seamlessly into the opening scene of the next book. As I already know what went on with Lex and Ivie, this was the perfect prequel for me. Oh, wait. I have another complaint. Bite Me was paced so fast, I ran out of book! Again!