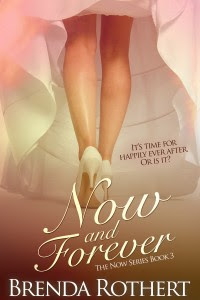 Now that Emma and Layla Carson have landed the men of their dreams, it’s time for happily ever after. Or is it?
Emma’s with childhood crush Cole Marlowe, and Layla finally found Mr. Right in alpha cop Ben Montrose. But both couples face unexpected obstacles that will test their relationships. Layla and Emma find solace in each other as battle lines are drawn, and they rediscover the close friendship they lost over Cole.
It’s all on the line as the sisters struggle to find the answer to the most difficult question they’ve ever faced: is the love they have now meant to last forever?

My Review
Now and Forever (Now #3)
by Brenda Rothert
My Rating: 4 out of 5 Stars

I'd followed the Now series from it's very start and had fun getting my mind pulled back and forth between the characters and vacillating between which of the four main characters I liked best. Brenda Rothert nicely concludes the emotional roller coaster ride in the last of the series, Now and Forever.

It's always interesting to see the dynamics between a couple after they've gotten together. Since this installment focuses on both couples - after all the fireworks between Cole and Ben that were somewhat inadvertently caused by Layla - it has twice the fun.

It starts off with Cole and Emma testing the strength of their relationship with a whole truckload of trouble, while Ben and Layla decide to go for something more serious. No vacillating for me here, I have fallen in love with both couples equally.

Of course, there are times I would have wanted to slap some sense into Layla (and Ben too, just to even it up). It's not her bitchiness that comes into play, though, it's her very independent streak that causes tension between them. Ben's dreams are unfortunately her polar opposite and it takes a loooong while for him to understand the meaning of the word compromise!

Cole and Emma seem to have gotten a lot better together, with Cole carrying them through their crisis (especially Emma's hormone driven angst periods) despite his own insecurities and misgivings. He's not that perfect, thankfully, with his comments and actions getting him into trouble more than once.

This is still very much a fairy tale: everyone acts a little more dramatically than expected and the outcome is (naturally) the happy ever after all readers would look for. It's so well written, though, you're rooting for them to pull through even if you just know they will and the story ends much faster than you would like. My only complaint? A major crisis ends with a phhht instead of a bang, making it a super let-down for me! Despite this, I would read this book, along with the previous two installments, again and again because I enjoy the maturing process of these four people. The Now series is definitely on my "keep" list, Brenda Rothert!

Brenda Rothert started her writing career as a print journalist. She now writes Romances, some Contemporary and others with a twist of dystopian society and adventure. Rothert lives in Central Illinois with her husband and three boys.

Other books in the series:
Now and Then
Now and Again