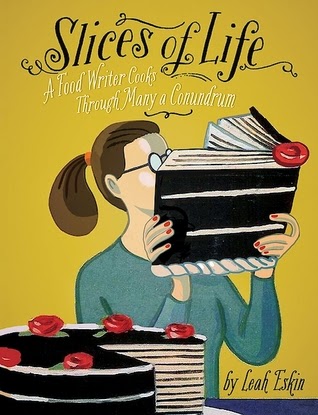 For nearly a decade, Leah Eskin has been serving up chronicles of everyday life, along with mouthwatering recipes, to the readers of her “Home on the Range” column in the Chicago Tribune. Now she has whipped up Slices of Life, a collection of her columns covering everything from her early married days to parenting adolescents—and everything in between. From “Best Friend Biscuits” to “Recovery Paella” to “Sullen Child Oatmeal Squares,” there’s always a recipe to cope with life’s sticky situations: the dinner party gone awry, the mortifying soccer match, the houseguest who eats nothing, the teenager who won’t listen. She tells the story of family life through its ordinary disasters—and pleasures.

Slices of Life is both a charming memoir told through food, and with more than 200 recipes, it’s also a delectable cookbook that will enchant anyone who appreciates the big and little moments of life.

Memories inspire appetites, just as food inspires memories. Not necessarily the oft-quoted madeleine and tea of Proust fame but simple things, like curtains, outings with children, and special times. Seemingly random things thrown together which make perfect sense when put against the backdrop of our lives. For example, a long-ago beach vacation reminds Leah Eskin of noodles. If you'd ask my kids, it's the smell of soup cooking right next to the surf with an indulgent uncle orchestrating the creation of the oversized, waist-high cauldron of beefy goodness.

By the third short story (On brownies! Heaven to this chocoholic!) I was reminiscing. Her comment on the revelation when you "dare to taste pure chocolate" recalled the first time I munched a cacao nib and went to gastronomic heaven.

It's not all good, though. Thankfully, Ms Eskin is no Julia Child (although it took years of practice and perseverance even for Julia Child to become the chef we remember) and lists her bad memories alongside the good. That tower of charred salmon and vegetables in front of a dinner guest sparked a memory of spaghettini tossed in anchovies, olives, cucumber shreds, and roasted tomatoes loosened with pasta water that was unknowingly thrice-salted by my son, my husband, and me. Yechhh. 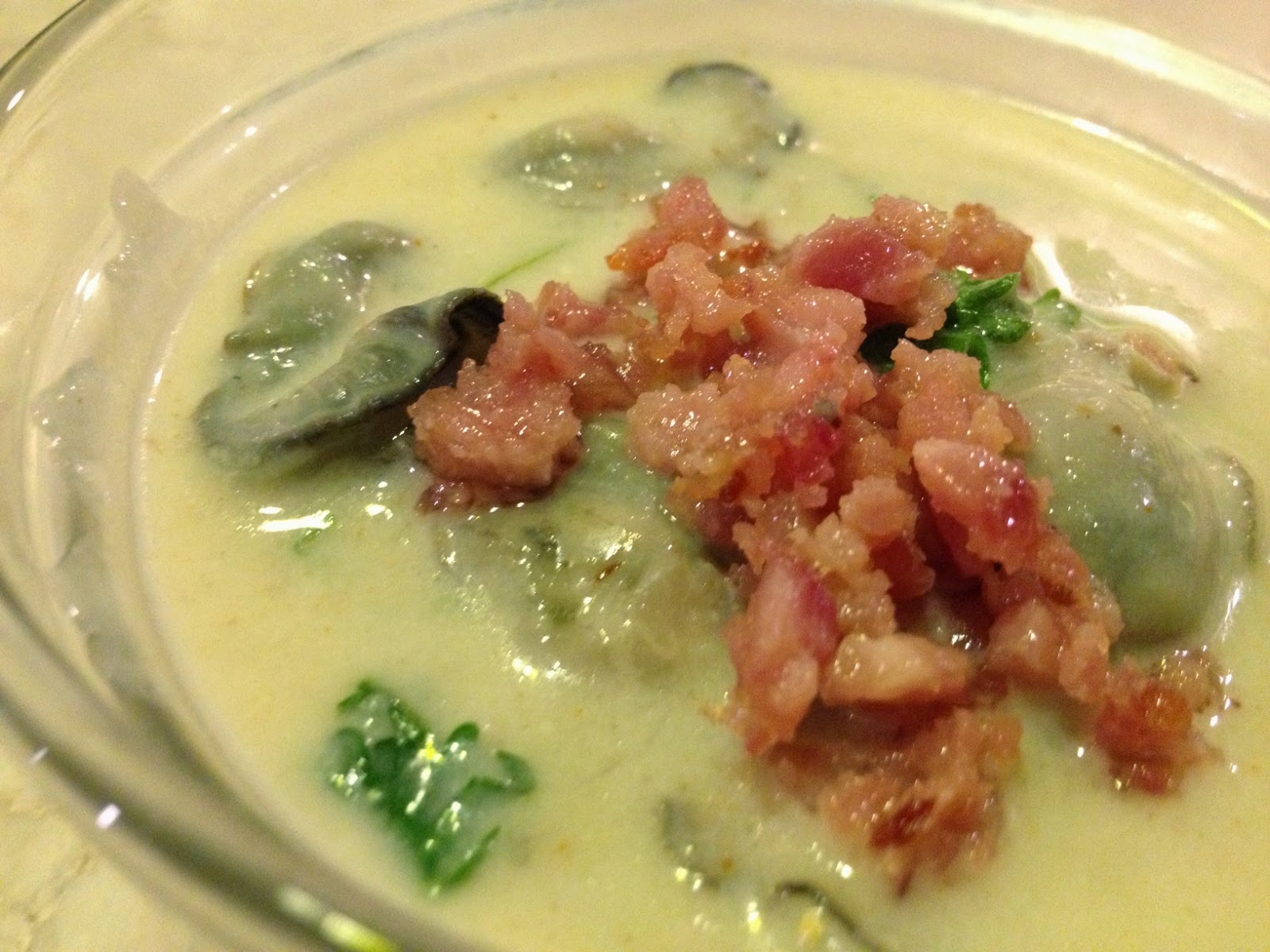 A cookbook isn't just introductions and memories, though. It's the recipes shared that make or break it. I decided to try something familiar and something I hadn't made before, just to make life interesting. After marking numerous recipes, I came across Oyster Stew and texted husband, "Have recipe of oysters in white sauce with bacon. Like?" A "Yup!" came back in less than 10 seconds, confirming the first of the trials. We decided, however, to make it on St Pat's Day because of howls of complaint from friends. 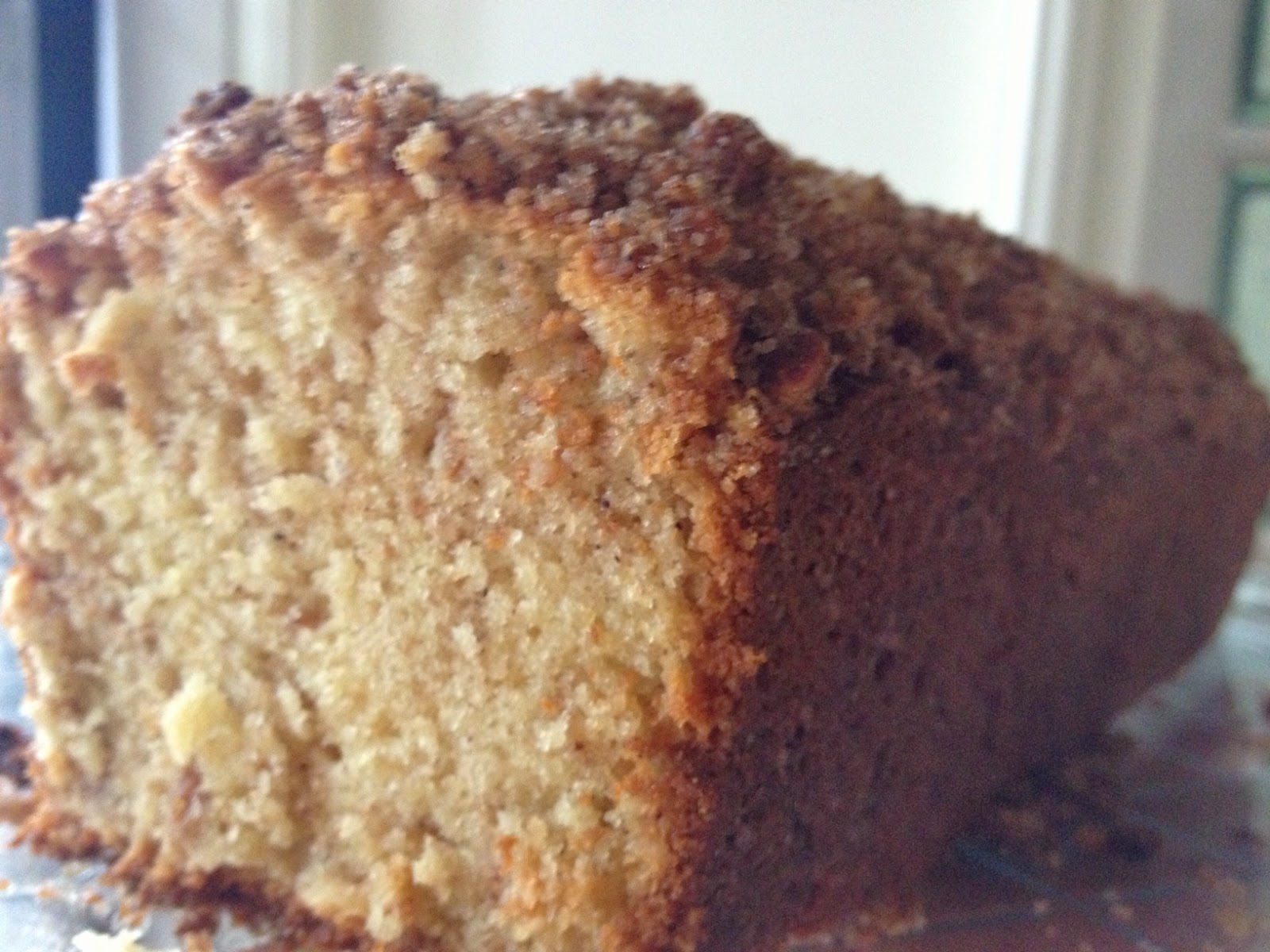 Next in line in the book was Standoffish Cinnamon Loaf and since I like nothing better than cinnamon (next to chocolate and lemons), that was quickly whipped up. I shared it with the family for breakfast - yep, it's very quick to make - and almost the whole entire loaf was downed before I could finish my coffee. It tasted like heavenly butter, had a good crunch from the nut streusel (With salt and fresh ground pepper! New to me!), and a terrifically tender crumb. I will be making this again. Very soon.

Back to my oysters. And bacon. Everything came together every easily after gathering up the ingredients. I followed the recipe exactly except for two parts, and only because of growing up in a Spanish-Chinese setting, mind you. First, "too garlicky" is a term that doesn't exist in the Spanish vocabulary so I tripled the amount of garlic called for since it would settle down to a melting sweetness when I'd be done softening it in bacon fat and butter. The Chinese influence abhors waste (frugal isn't an "f-word" here), prompting me to blend the aromatics into the sauce instead of throwing them away. It made for a thicker, richer, very flavorful backdrop to the oysters. [Note - drop the cream and add fresh lemon juice to this for the next go if I keep my variation.] Inhaled is a mild word for how this was received at dinner. Garnished with a combination of chopped parsley and coriander then sprinkled with crumbled bacon, it was ladled into mouths with a side of beer bread. No complaints from the twenty-plus people that had this starter!

Need I say I loved and enjoyed Slices of Life? I'll be trying out recipes from this cookbook long after this review is posted. It's arrangement may seem a little strange for people who are used to the way the usual cookbooks are fixed, like grouping salads, mains, and desserts together. This isn't done that way. It's arranged according to what was happening in Leah Eskin's life at the time so don't be surprised if you find a recipe for a Black and White Cookie nestled against Mushroom Broth. Her entire point, I think, is to celebrate life in its entirety and have a dish to commemorate that particular moment. Much like a lot of people connect a certain song, color, or smell to a particular memory, she does it with taste - and I mean both with food and with aesthetics.

Note: Images of Oyster Stew and Standoffish Cinnamon Loaf taken from off my kitchen island. Yes, the pics look simply delish and I loved eating them. Yummmmmy! Yes, the pics are mine!

Note Note: multitaskingmomma's hubby had quite a bit of the stew and when asked what his verdict was, there was no answer - too busy eating....