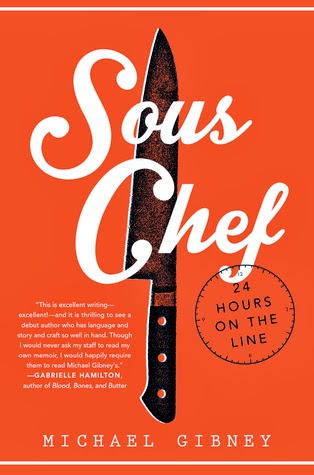 The back must slave to feed the belly. . . . In this urgent and unique book, chef Michael Gibney uses twenty-four hours to animate the intricate camaraderie and culinary choreography in an upscale New York restaurant kitchen. Here readers will find all the details, in rapid-fire succession, of what it takes to deliver an exceptional plate of food—the journey to excellence by way of exhaustion.
Told in second-person narrative, Sous Chef is an immersive, adrenaline-fueled run that offers a fly-on-the-wall perspective on the food service industry, allowing readers to briefly inhabit the hidden world behind the kitchen doors, in real time. This exhilarating account provides regular diners and food enthusiasts alike a detailed insider’s perspective, while offering fledgling professional cooks an honest picture of what the future holds, ultimately giving voice to the hard work and dedication around which chefs have built their careers.
In a kitchen where the highest standards are upheld and one misstep can result in disaster, Sous Chef conjures a greater appreciation for the thought, care, and focus that go into creating memorable and delicious fare. With grit, wit, and remarkable prose, Michael Gibney renders a beautiful and raw account of this demanding and sometimes overlooked profession, offering a nuanced perspective on the craft and art of food and service.

A flash of realization happened a few pages into Sous Chef: this was one of those rare moments where a book that reads like an autobiography served to both infuse more knowledge into my brains and further enlighten me about a part of the service industry that I find so fascinating. Not often I come across a writer like Michael Gibney and it is such a wonderful treat when I do!

One day in the life of a sous chef. Somehow, media has seen fit to glamorize culinary careers, making every other person who can wield a frying pan seems to think they've got a chance to be the next Iron Chef. A little warning for those whose minds are in the sous vide - read this book first and then decide if you're up to the rigors of culinary school, then years of grueling work everyday. There is nothing terribly romantic about "cheffing" unless you're on the eating end of the plate.

It's the cook's dedication that makes my favorite table in some restaurants the one beside that huge picture window with a view into the kitchen. Nothing makes my gourmand's heart beat faster than that intimate pas de deux between the culinary artist and food. A beautifully plated meal? Meh. A good cook can do that with anything. But to see that ballet of people scrambling to prep my choice: tossing, chopping, considering how the ingredients will meld; and then bringing everything together in a grand finale, now that is where the magic is. Those are the secret views Michael Gibney sheds light on.

Apart from that, there are little nuggets of information hidden here and there. How to tell apart a good kit from an ordinary one. The tools that separate the degrees of chefs. How to keep and fillet fish. How order is kept at the Back of the House. The dynamics between the Front and the Back. Ingredient information, an overview of a few cooking techniques, the list goes on.

However, what truly got me is his philosophy as a chef. It's long been a conclusion that a chef is someone temperamental and self-centered, not considering anyone's tastes or opinions contrary to his own.

While there are admittedly a few who think that way, he reckons that it's pleasing the diner which keeps chefs from burning out. To see a happy smile after the first mouthful or, better yet, the same faces returning again and again, keeps the chef fresh and inspired. An outlook like that can keep a prima donna (in any industry, not just the culinary one) grounded, fresh, and hungry.

Sous Chef is a book I'd give to anyone considering a career in Culinary Arts. It's tough, demanding, and consuming but for someone with a calling in this direction, it's a chance to give a memorable experience to somebody who admires what you do. They may not know your name or your face, but they will know your food.