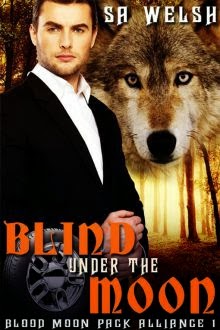 Remy must learn to put his doubts aside and become the Alpha he needs to be to protect his pack and his new blind vampire mate.
Remy is a wolf shifter who loves getting under the hood of a beauty with lots of horses and hates his mother nagging him to start having pups. When he is summoned to his asshole alpha's house, things go from bad to worse as he fails a test of loyalty by refusing to torture and kill a vampire. He's forced to challenge for the position as Alpha. No one is more surprised than he is when he actually wins. But what does he know about running a pack?
Remy soon realizes the severely wounded male vampire is his mate. Skylar’s coven sent him to investigate rumors about a poison targeting vampires. Skylar is drop-dead gorgeous, with the brightest blue eyes Remy has ever seen. He's also blind. Will forces outside their control and the new responsibilities facing Remy put a stop to their mating and their life together before it begins?

Remy is what one would call a youngest child and like all youngest children, they are either cuddled and baby-spoiled by the parents or elder siblings or, get teased, ordered and sometimes put down by the elder ones. It's all good really, youngest children can be very resilient. Especially when the others are all part of a litter and he was born a singleton. They learn to rely on themselves and get the better end of inner strength.

One day, the alpha summons Remy to attend to him. When he gets there, things are not so nice: there are the betas, there is the alpha, and there is a vampire chained and tortured to be 'broken in ' by Remy. Of course he says no.

No one says 'no' to the alpha and live to tell the tale. Well, Remy lived and told by defeating the alpha and becoming alpha instead all in one short hour. Now he has to deal with siblings who still see him as the runt, learn his mother had lied about his potential since day one, and to cap it all off, he has a vampire for a mate. A blind one. Skylar.

The story that unfolds is not over when the book ends. In fact, it just teases the readers of more things to come Remy's way. Yes, his love with his mate Skylar is sealed and  marked but the rest of it? Hmmmm, the rest of it is hanging out there until the next book is released.

I really liked this one. It was light, it was fast paced, there was not that much drama nor gore to deal with, but just enough to tickle the curiosity.

This is the first of  S.A. Welsh I have read but my friends had already been telling me to give her a try. I did and I think I will follow this one. Maybe mosey over to the others she's published. I like this style of writing, it gives me the escape I need without feeling too angsty in the process and left me smiling too. Two things I look forward to when reading any book.
Posted by multitaskingmomma at 3:53 AM