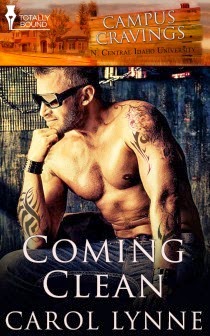 This is book eighteen in the Campus Cravings series
Trapped by words spoken as a teenager, Chase Hughes longs for a love that touches not only his heart but also his body.
First loves are often the hardest to leave behind. For months, college student Chase Hughes has known he owes his high school sweetheart the truth about his feelings. He still loves Benny, but he has grown to realise he’s ready to move on. The problem is, he knows Benny will be crushed by the breakup, and hurting the sweetest man he’s ever known weighs on Chase’s soul.
While working as a server at Clean Slate, Chase meets the man of his fantasies. Mac Evans pushes all of Chase’s sexual buttons, and after having uninspiring sex with Benny for two years, Chase is ready to explore more than the tattoos on Mac’s muscular body.
Mac gave up everything to come clean with the people he loved, and expects nothing less from Chase before allowing things to progress between them. Chase is forced to choose between hurting the man of his past and giving up a sexy, tattooed man that may be his future.

The Campus Cravings series have been a secret passion of mine. What I like about these books is that each one is a stand alone. For the unfamiliar, yes, there are already 18 books but that is because this is set in a campus where our men enter freshmen or are just graduating and they meet their partners, husbands or soul mates there. Some of them are professors, some are coaches, mostly these are college students. Each of the men have their own story to tell and just like any college campus, life keeps going. So does this series.

In Coming Clean, we have quarterback Chase Hughes who is caught between his love for his boyfriend and his coming to terms that he is ready to move on and be an adult. The difficulties he faces avoiding the inevitable are stressing him out. Then he meets Mac Evans, an older man who pushes just the right buttons.

These two men have something in common, they don't want to hurt people they love but sometimes, to grow as an individual, they know there is no avoiding it. And no, neither man are wanting for unscrupulous one-night-stands, they both like relationships. Will their relationship pass the tests they know they face?

Carol Lynne writes in a lighthearted manner that makes it easy on the eyes and brain to just relax into her stories. This is the perfect type of book to take to bed when both the mind and body are exhausted. The romance between the men is sweet in the development, the test they face are frustratingly real and there are times that she can trigger a memory in each one of her readers, memories that are being experienced by her main characters.

Posted by multitaskingmomma at 6:27 AM