Review: The Haunting of Timber Manor (Memoirs of the Human Wraiths #1) by F.E. Feeley Jr. 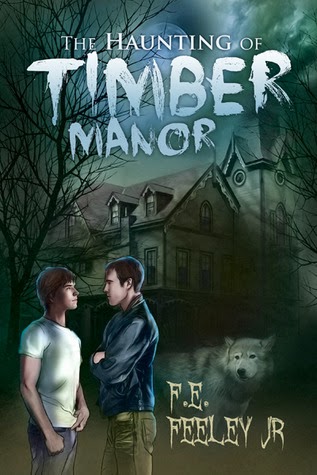 While recovering from the recent loss of his parents, Daniel Donnelly receives a phone call from his estranged aunt, who turns over control of the family fortune and estate, Timber Manor. Though his father seemed guarded about the past, Daniel’s need for family and curiosity compel him to visit.

Located in a secluded area of the Northwest, Timber Manor has grown silent over the years. Her halls sit empty and a thin layer of dust adorns the sheet-covered furniture. When Daniel arrives to begin repairs, strange things happen. Nightmares haunt his dreams. Memories not his own disturb his waking hours. Alive with the tragedies of the past, Timber Manor threatens to tear Daniel apart.

Sherriff Hale Davis grew up working on the manor grounds. Seeing Daniel struggle, he vows protect the young man who captured his heart, and help him solve the mystery behind the haunting and confront the past—not only to save Daniel’s life, but to save his family, whose very souls hang in the balance.

One of the best things that can ever happen is to chance upon a horror novel that actually got me the goosebumps and chills. The last time this happened was when I was reading Stephen King's 'It.' This is the second book I have read written by F.E. Feeley Jr, and somehow, this is right about the scariest - after 'It.' (Or maybe equal to it. Don't mind my rambling, I swear I am still suffering from the aftermath of this story.)

This is the tale of Timber Manor. An elegant, grandoise and quite opulent home. Built by Daniel Donnelly's grandfather, it was once a home where happiness thrived. When tragedy struck the family, it changed everything, including the house's very foundation.

Daniel is called back home by his one surviving family, his Aunt Carol. The death of his parents in a boating accident left him alone and she calls him to take over the family businesses and vast assets. Including the manor. When he get there, he meets Sheriff Hale Davis. Their mutual attraction brought their romance quickly to the fold.

Unknown to them, deep in the shadows of Timber Manor, an evil presence slowly awakens. It is responding to Daniel's presence. Slowly it gains strength, waiting patiently for the right time to exact its revenge.

As the manor slowly comes to life, so does this shadow. Soon, Daniel's dreams are affected and he starts seeing and hearing things that should not be. He gets even more confused when he encounters the Timber wolves, the very ones the manor is named after. Instead of harming him, they seem to want to communicate but he does not know what to do.

Soon, events start escalating and it is all Daniel could do to keep himself sane. It is Hale's presence and support that keeps him on the right track but Hale is beginning to experience the weirdness and the haunting, too. How will they handle this haunting? How do they fight back against this evil, invisible force? What secrets do the wolves keep?

This is not a straight out and out horror story where the gore could sometimes overcome the plot. In The Haunting of Timber Manor, there is a gradual build up of the story told through different POVs which just served to enhance the read. The gradual increase in the plots' intensity I would liken to a frog (the reader) sitting in a bath slowly boiling to death without it really noticing. Gross comparison, but it is true all the same. This increasing intensity was so unhurried, I did not notice I was terrified. Until the daughter came in.

I screamed. She screamed back.

I am a sucker for the horror and MM genres. F.E. Feeley Jr.'s combination of the two just reaffirmed my fascination for both. He has a talent for weaving a horrifying tale of evil vs. love and perseverance. The read itself and its impact is indescribable. The only thing I can honestly recount are the quick rise of the goosebumps and the terror of the 'what if' that hides in the shadows.

Posted by multitaskingmomma at 1:46 AM