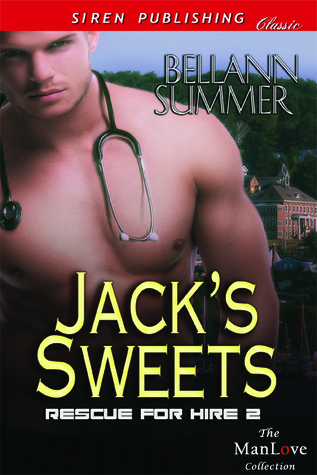 Welcome to the world of Rescue for Hire. Meet the team members that make up a company that form a family of heroes.
Jack Woods is a paramedic of the team, a caregiver by nature, but on his off time turns in to a wild, hard partier. After watching his best friend and boss fall in love he decides he wants that. Putting his party ways behind him turns out to be harder than he thought when an ex won’t s stay an ex.
Brian Hayward is tiny, delicate, and fragile. He has never felt an excepted part of anything. Meeting Jack and being brought into the family of the rescue team is a dream come true. Then a horrible tragedy strikes, causing Jack to use his every medical skill to keep life going.
Can Brian and Jack’s relationship survive the consequences of the past? When the whole team moves in, can the couple survive the chaos?

Have you ever made a mistake and then realized that fate had a hand in things and you stumbled into a book, an author, a series, that made you smile? Jack's Sweets is that sweet mistake and even if I do rate this the way I did, I will go out of my way, take the time and just click on the first book, Bear's Pup, so I could experience the joy of reading a relaxing nice read that is light and enjoyable.
This is a great escape book, and yes, I would be the first to admit to some guilty pleasures once in while. Okay, I admit, all the time I do succumb to these lights and fluffs for these are totally a joy.
We have Jack, a huge man with a whole lot of training, needing to feel the love only a partner can give after seeing his best friend find his one and only. Without seemingly looking for this rare individual, he stumbles into Brian, a small but independent man who just so happened to be in the way of a shooter who barges into the community center where he works with children. Jack was one of the team members who rescues him and there is an instant attraction.
Okay, so fans out there who do not like insta-love and such, well, this is one of those things but I do really like the way this was treated. Jack's type are small builds and eyes to die for and Brian just so happens to be that type. Yes, they fall insta-lust, but their relationship do go through the rigmarole of angsts and drama from an ex-from-hell.
The drama comes in when two little bundles of joy come in unexpectedly and in the most tragic manner and the men do get into all sorts of mess. Thanks to the team and three biddy old women, they do handle their new joys and lived to tell the tale.
Now this is not a shortie but it is so light and even lightly treated and written that it came out a shortie. It was entertaining, I did not have to think and ponder on the mysteries of the world. It was romantic, believe it or not, and best of all, it just had enough of erotica in it to make this sizzle a bit.
So yes, a discovery from a mistake that made me smile.
Nice!
Posted by multitaskingmomma at 8:00 AM