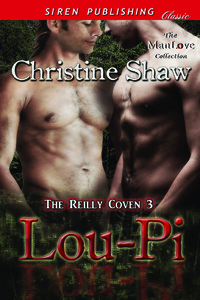 Since learning about vampires, Louis "Lou" Farner has desired one of his own. A true fated by blood mate is his deepest, darkest wish. Especially considering he lives with a coven of vampires who have mated pairings. The only problem is that he is gay. He doubts he will find even one gay vampire who could be his mate. How very wrong he was.

Pierce Reilly came home from a business trip to discover strangers in his home. Nobody had told him they were expecting company, else he would have cut the dreaded trip short. It would have been the lesser of two evils. That is until he smells the most amazing scent on the way up his driveway, mixed in with those strangers'. He can't quite put a label on it, but it makes his cock hard. When he finally finds that scent, his blood runs cold. Fate has paired him with another male. But Pierce was as straight as a ruler.

Lou persists in his bid to win his mate's love. Can Lou succeed though? Especially when problems arise and Lou is kidnapped. Will he even get the chance to love his mate? It is Lou's job to make sure his mate has some fun in his life and nothing will stop him from accomplishing his goals.

I like this series. It is a very light read, very fluffy,  and entertainingly hot in many scenes.

This series is about this father and his nine sons, a vampire family, who are left without wife and mother when the mother dies. Things pick up when the father discovers his fated-by-blood mate and soon, his two other sons find their own.

First son was Saxton discovering his mate in the human Greg in book 2. Then it was Russell and Ronan. But Ronan had run away and Russell went of looking.

Lou-Pi is about the third son, Pierce, the straight one. When Lou first sees him, his immediate reaction was to leave. He is straight after all. So Lou decides to make sure his mate mates him.

This is the point where I found myself floundering.

Out of nowhere, KABOOM!

I give this a 2 Stars for the action packed scenes, the erotica that was hot, and the ridiculous pranks these guys cooked up which did make me laugh.

Posted by multitaskingmomma at 9:10 AM