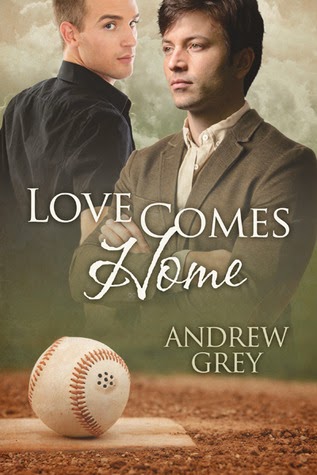 Tom Spangler is used to getting what he wants. When Greg captures his attention, he asks Greg for a date. They have a good time until Greg gets a call from the friends watching his son, telling him Davey has fallen. Greg and Tom return to find the worst has happened—Davey can no longer see.

With so much going on in his life, Greg doubts he’ll see Tom again. But Tom has researched beep baseball, where balls and bases make sounds to enable the visually impaired to participate in Little League. Tom spearheads an effort to form a team so Davey can continue to play the game he loves. But when Greg’s ex-wife shows up with her doctor boyfriend, offering a possible cure through a radical procedure, Greg must decide how far he’ll go to give Davey a chance at getting his sight back.

Love Comes Home is a story of a boy's love for baseball, a father's love for a son who is blind, and a man's decision to love another man and his son. It is a story of how technology can be used to help those who may lack some senses for one or other reasons. It is the story of how the ignorant can finally see for themselves what it can be on the other side of the fence.

When it comes to the Senses series, Andrew Grey has 'trained' his fans and readers to prepare for tissues and maybe get their hearts ripped out. For his other works, he has trained us (yups! including me) to get prepared for some HOT!ness and erotica that can leave me a bit flustered, to giggle, to grip the ereader in suspense, to try to figure out the mysteries, or simply to give up to the sappiness. He has trained his readers in such a way that when they pick up any one of his series' installments, they are conditioned to respond.

Then he throws a curve ball and all conditioned responses are thrown out the window and we readers are left to ponder: Okay, what is he doing changing things around, leaving us to flounder?

Well, Love Comes Home is that curve ball, once again. Instead of the usual tricks, Andrew Grey has given us something real and necessary. A lesson, in fact: that even when handicapped, things are not over, and it could just be the beginning of a different way of thinking things. Being blind does not mean being deaf. And in comes beep baseball.

When the cover was first revealed, one commentator asked why there were holes in the ball. The answer was that this was some sort of speaker for the sounds to come out from, much like our cell phone or ereader speakers. With beep balls, the sounds coming out of it are those that home in the listener to guide them where it lies, or flies. Quite an intriguing invention that opens the doors to a whole lot of potential.

This story is not much of a romance, that is an aside. The real story is about Davey, the boy who is given the chance to play baseball once more, to embrace his other senses. Getting blind is not the end, and as the boy said: he is going to be okay. It is also the story of his father, Greg, who had to learn to let go and let his son live his life. And of Tom, who saw the father and son team as the family of his dreams.

This does not send me to tears, but it does make the world clearer, with the ball beeps and the laughter of little boys who just love to play the game.

**If you want to know the story behind how this story came to be, read HERE!
Posted by multitaskingmomma at 10:04 PM