Review: Un-Expected (Left at the Crossroads #1) by Lisa Worrall 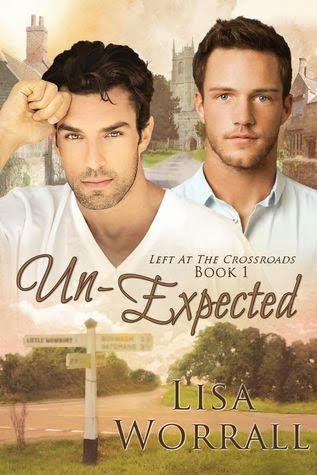 Little Mowbury is a sleepy English village deep in the Cotswolds. The kind of village where you’re only a local if your lineage can be traced back to the dinosaurs. Where you can find everything in the single shop from morning newspapers, to dry-cleaning and getting your shoes mended. And, of course, where everybody knows everybody else’s business. It’s easy to find… you can’t miss it… just ask anyone and they’ll tell you… “It’s left at the crossroads.”

After being dumped on graduation day by the love of his life, Harry Boyd, Micah Lewis returned to the sleepy village he grew up in. Living next door to his mother wasn’t his best idea, granted, but when your heart was broken, there really was no place like home.

Six years later, secure and content in his job as midwife for a local birthing centre, the last person he expected to move into Lilac Cottage across the street from him, was Harry Boyd. Seeing Harry again sends Micah into a tailspin and opens wounds he thought had long since healed. Although Harry himself isn’t the only issue Micah has to face. That would be Harry’s very beautiful and very pregnant partner, Selena.

This had a huge promise, based on the blurb. It was a bit unexpected at the end.

Here we have Micah Lewis, a midwife in the village of Little Mowbury, where the life was lazy, sleepy, relaxed. The only exciting thing happening in his life was when his mother unexpected drops into his home. Blame him for this when he gave her the key. When a couple moves into the house across the street, it raised the bar of excitement. Until he meets the pair.

Harry Boyd was Micah's ex. The same man who left without a notice, breaking his heart and ruining it for anyone else. Now he is back and wants Micah back. Will Micah allow him into his heart once more?

The life and career of Micah are fully explored in this tale of romance rekindled. The readers are up for some interesting and gross details which were hilarious if they were not so real and dangerous.

The two men's romance was very HOT! They missed out on their enjoyment for six years and are more than making up for it. Their friends and family were all thumbs up so there was really no angst going on, nor any drama to ruin the romance.

There was a nice twist to the story here and it would not do right to ruin things. It is unexpected and it made up for an interesting read. The reasons behind it sets the course of Harry's decision over his relationship with Micah all those years ago.

Harry's father is the one individual who has made a huge impact on both these men's lives and it seems that he is past all sense of morality or even logic. He will go through any lengths to ruin the relationship.

And here I am now having a bit of a problem on some details. Harry did explain that his father was one Harold Wainwright, a powerful member of parliament. Boyd was Harry's  grandmother's maiden name and he had used that name while in university with Micah. This was still the name he used. Thing is, at the peak of the drama, this same father was referred to, several times, as Harold Boyd III. This is where I scratch my head and just give up.

Posted by multitaskingmomma at 8:54 PM