Review: The Wolf and His Diva by Chris T. Kat 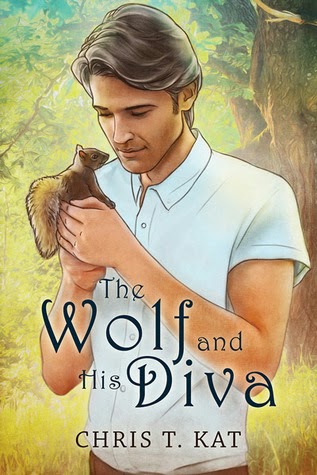 George Owens is comfortable with his life just the way it is. A wolf- and fox-shifter, George leads a reclusive lifestyle with his energetic and diva-ish mate Billy, a fox- and squirrel-shifter.

George has no desire to take over leadership of the pack, despite his father’s wishes. Edward Owens is feeling his age and wants to make sure the pack is in good hands should he not be able to win his next challenge. However, George is adamant that he wants no part of it.
But events rock George from his complacency, and he realizes he has to take a stand and fight for what he cares about. If he remains in the past and cannot change in order to do what he must, he risks losing everything he loves.

There are a lot of things going on in The Wolf And His Diva. For one thing, we already have an established couple when the story begins. The author wonderfully establishes how these two came to be as a couple throughout the whole book. She did not just dump a back story in one page, instead she gradually inserted it throughout the events that unfolded.

George is a shifter, and so is Billy. They are not the usual shifters we are used to, though. Instead of just being one type of animal shifter, the paranormals here have two forms and can have other abilities that are unique to them. No one really knows what the second form is nor the other abilities would be before they actually come out or is experienced. These paranormals get to have their personal surprises as they steadily mature. This is a concept that is different from all the other paranormal plots I have read so far. George is a wolf/fox shifter and Billy is a fox/squirrel shifter.

When the book opens, these two men are already mated and have their own lives to live. Billy is a paediatric nurse and George is an author who is also the son of the alpha of his pack and the heir to that position. A position he honestly and openly rejects. Thing is, he cannot seem to make the rest of the pack, and his alpha father, accept his rejection.

Billy. This is the Diva in the title. And he is HUMONGOUSLY, OUTRAGEOUSLY DIVA-ISH he boggles my mind. He is quite funny in his divaness though, so he sort of creeped into my heart. He is one individual who knows he can get away with anything from his mate and is not embarrassed to embarrass his mate or make him uncomfortable. The best thing is, George allows him to be a Diva and loves it, too.

I did like this story. It was quite different and outrageous. It was a fun and very light read. I am a bit frustrated, though. I really want to know what went on BEFORE this. I wish to read that prequel if it is already written for I really think the way these two met and the process they both went through to make their relationship work would make for a better read. As this is right now, this is like reading a second book with nary a chance to get hold of the first one.