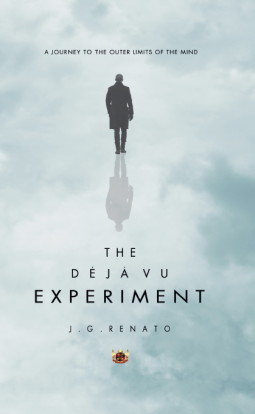 Theyʼre everywhere around us, but usually we choose to ignore them. They happen in space. They happen in time. Theyʼre little moments of discontinuity in our experience, but they can become portals to the greater experience of our world as illusion, as the veil, as Maya, as the collective dream.

And the experience of ourselves as the dreamers. If we choose not to ignore them, but to follow them, like Alice down a cosmic rabbit hole, we might just begin to understand how it was that we got here in the first place.

This book is about not ignoring them, but embracing them. Journey to the outer limits of the mind to explore the worlds of quantum physics, black holes, and superstring theory.

John Galt guides us through The Déjà Vu Experiment. He acknowledges that he was wrong about stopping the motor of the world, not just because stopping that motor may have been harmful to too many people, but because that was the wrong motor. Instead of asking the immortal question “Who is John Galt?” the proper question to ask is: “What is John Galt?”

The singular perspective of John Galtʼs transformed character is certain to attract the discerning enthusiasm of Ayn Rand fans everywhere. Readers worldwide will gain valuable insights that transcend our boundaries of previous notions about reality, life, and our purpose.

Once in a while, I crave a book that makes my brain shift into gear and step out of its cozy comfort zone. Something that gives me a swift strike in the butt to make the neurons fire up. Random thoughts. Destroy to create. Kill to spread love. Science versus religion - versus art? Freedom to control. Oxymorons? This is what is asked in The Déjà Vu Experiment when J.G. Renato brings up thought provoking questions one wouldn't otherwise consider on a day to day basis BUT would really like the answers to at the same time.

If these contrasts would include modern music, consider the anomaly of the mashup. Maybe there is a note similar between the two songs, a thought, or even just a word. The spinner sees fit to mix them up and put them through a blender, creating an entirely new song that is familiar, but at the same time, strange. The brain goes into hyperdrive to understand this deviation, then as it accepts it, brings up a string of other songs that would also meld, no matter how far-fetched. The brain has just gone,"Blip!"

I'm smiling at the was this was written because there's no way to box it up. It makes you wonder. There's a bit of vertigo while waffling between reality and fantasy.  It's an memoir within a novel within a scientific discussion authored by an dying, old man who isn't... It's supposedly rambling yet filled with numerous thoughts that provoke... I love it!

Just for the sake of discussion, I think that most of Mr Renato's arguments are drawn from Western philosophy, which is predominantly linear and packaged into nice, neat little boxes. Somehow Eastern and South American philosophies work the other way - consider yin and yang, the much argued about Mayan calendar, or even the ba-gwa. There are no lines, it's just contrasting energies ebbing and flowing into each other. A precursor of string theory? Perhaps. Perhaps not. But it could explain why a large majority of people from the Far East are more apt to accept differences and question only to enlighten, not provoke. Each philosophy has a point; the argument is more in laying down the boundaries of where the other would agree. East sees aggression, West sees submission. Each is right and simultaneously wrong. Conundrum much?

The question The Déjà Vu Experiment asks is,"Can you believe what you see or think?" If you were paying attention, the answer should be,"No."