A.D. Justice's debut novel is Wicked Games, A Steele Security Novel. It is the first of a four-book series. Each book is designed as a stand-alone, but reading from the beginning will give the reader a better sense of how the characters are connected. The premise of the series is based on a group of elite soldiers and their adventures with Steele Security.
The second novel A.D. released is titled Crazy Maybe. It is not for the faint of heart - complex, real-life issues are addressed, with several twists and turns that will keep you turning the pages until you've devoured the whole book!
A.D. Justice has been married for 24 years and has two wonderful sons in college. She is also an avid reader of romance novels and, to her amazement, a self-published author. A.D. enjoys reading many different types of romance books - including drama and suspense, crime and mystery, NA and YA, and contemporary and erotica. 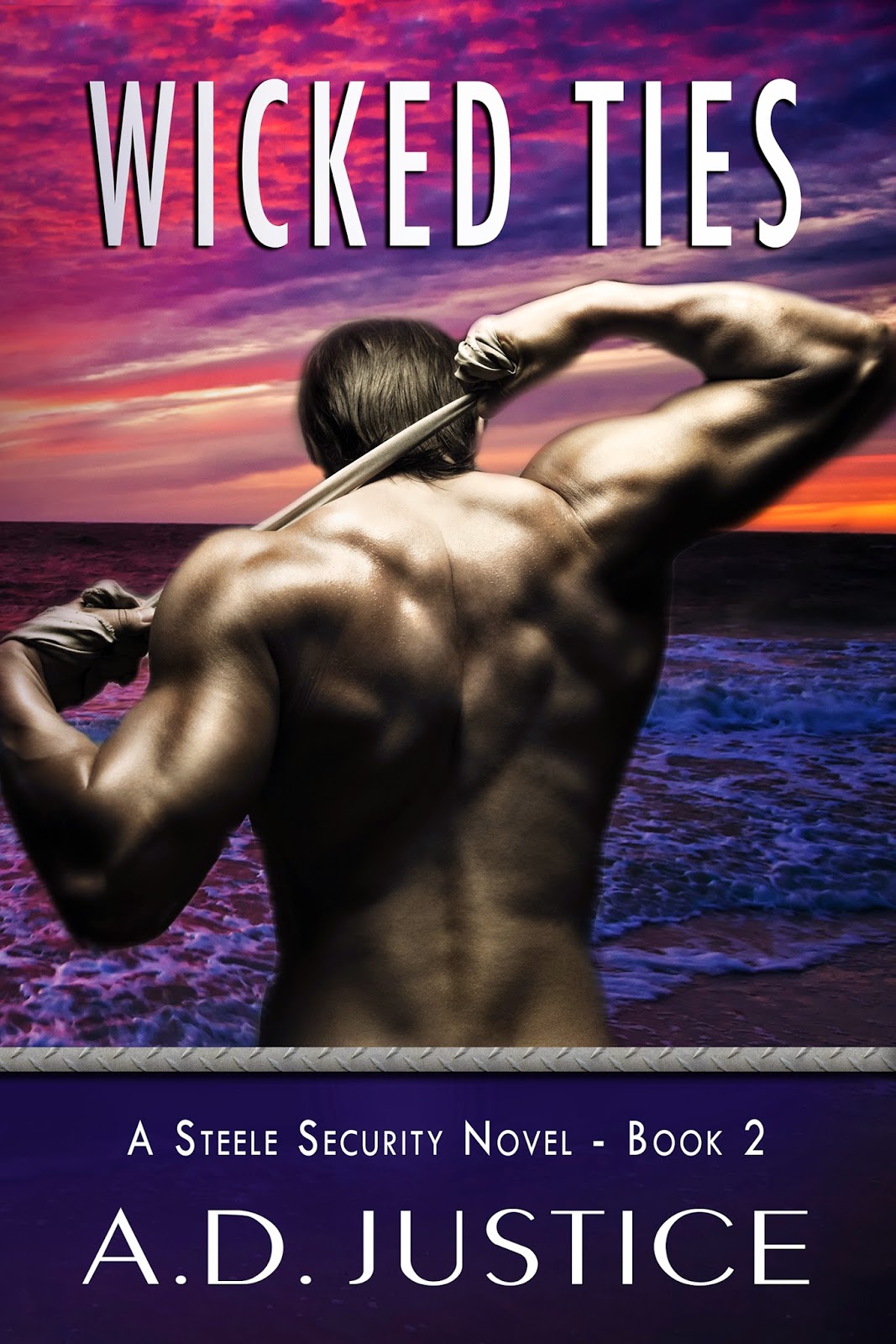 What if everything you believed in turned out to be a lie?What if learning the truth changed everything?
Colton “Bull” Lanier thought he had his life all figured out. His trust was hard earned. He let no one see the man inside. He didn’t believe in love and he didn’t get involved. That is, until she walked into his life.
There’s more to Steele Security’s newest client, Chaise, than what meets the eye. She’s in trouble but she’s also hiding something and keeps her secrets close to the vest. With her life in danger, Bull reluctantly takes on her case to help her find a missing girl and protect her life in the process.
When their attraction flares hot enough to burn them, Bull gives Chaise something very rare – his trust. But as worlds collide, lifelong secrets are revealed that makes Bull question everything he’s ever believed. When Chaise disappears, the men of Steele Security are on the case. But will they get there in time?
Forgiveness. Trust. Love.
Ruthless. Doubt. Coldness.
Will Bull find out what kind of man he really is? 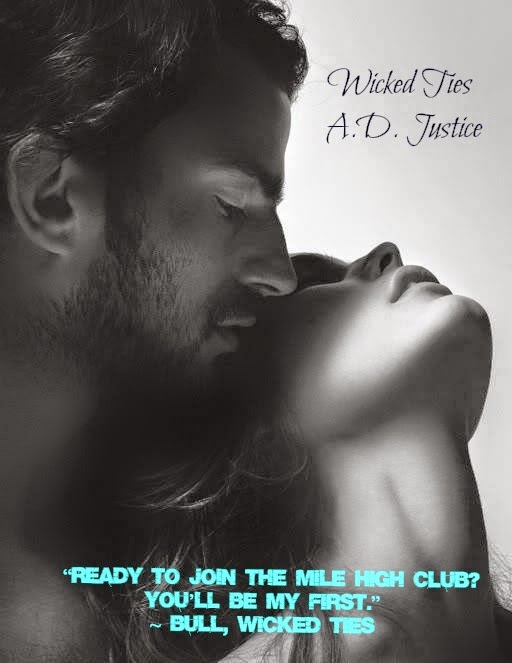 I finished Wicked Ties right on the heels of Steele Securities first book, Wicked Games. I think it says something when I can read all 700+ pages of two novels in one day!

First, what a title! It's such a play on the plot of the book in more ways than one. It hints at what kind of, er, games, Bull likes while making you wonder exactly how Chaise fits into this puzzle.

Chaise is hinted at in the ending chapter of book 1. I honestly thought she was a he out to cause more trouble for Noah and Bri. Again, A.D. Justice comes up with a great smokescreen!

Bull, or Colton for Chaise, knows that she is trouble or is bringing trouble, he's just not sure which. But he knows he finds her attractive and that's enough to set off the warning bells for him!

Chaise is in an unusual position where she is forced to hide from the people protecting her, the Steele Security team. While her enemies know who she is, Bull, Rebel, and Shadow don't. It's a game of tag that leads them straight to the people who have to kill her. It also leads Bull to people he never expected to meet again.

While there isn't as much drama here as in the first book, there is more than enough action to make up for it! It's practically non-stop from chapter two and doesn't let up until the end. Chaise, in particular, surprised me with how familiar she was with self-defense, shooting, and "Inspector Gadget toys." Says something for her background, doesn't it?

But her secrets are something Bull has difficulty dealing with. It's further complicated when his past collides with his present in a way he never thought it would. He's left not knowing who to trust and that definitely puts him off balance.

In the end, it puts Chaise in more danger than she already was and it takes all of them working together to make sure she is protected.  Rebel, with his "internet surfing skills," is responsible for keeping her safe but Bull and Noah have to take matters into their own hands to complete the mission.

Again, I'm very happy with the realism portrayed in the action sequences here. It's more Jack Ryan than Mission Impossible, and I have this sneaky suspicion that Ms Justice is doing covert research! Hehehe

One weak spot I found, though, was the reaction of the antagonist at the very end.  Somehow, he didn't seem unbalanced or emotional enough after everything that happened.  The snap in his sanity was something I thought was a little delayed.

But, that's not going to stop me from reading the rest of Steele Securities. I ran out of book just before bedtime when I reached the last page of Wicked Ties so I guess I just have to reread them both until A.D. Justice finishes the next installment on Rebel. Or will it be Shadow? I can't wait! 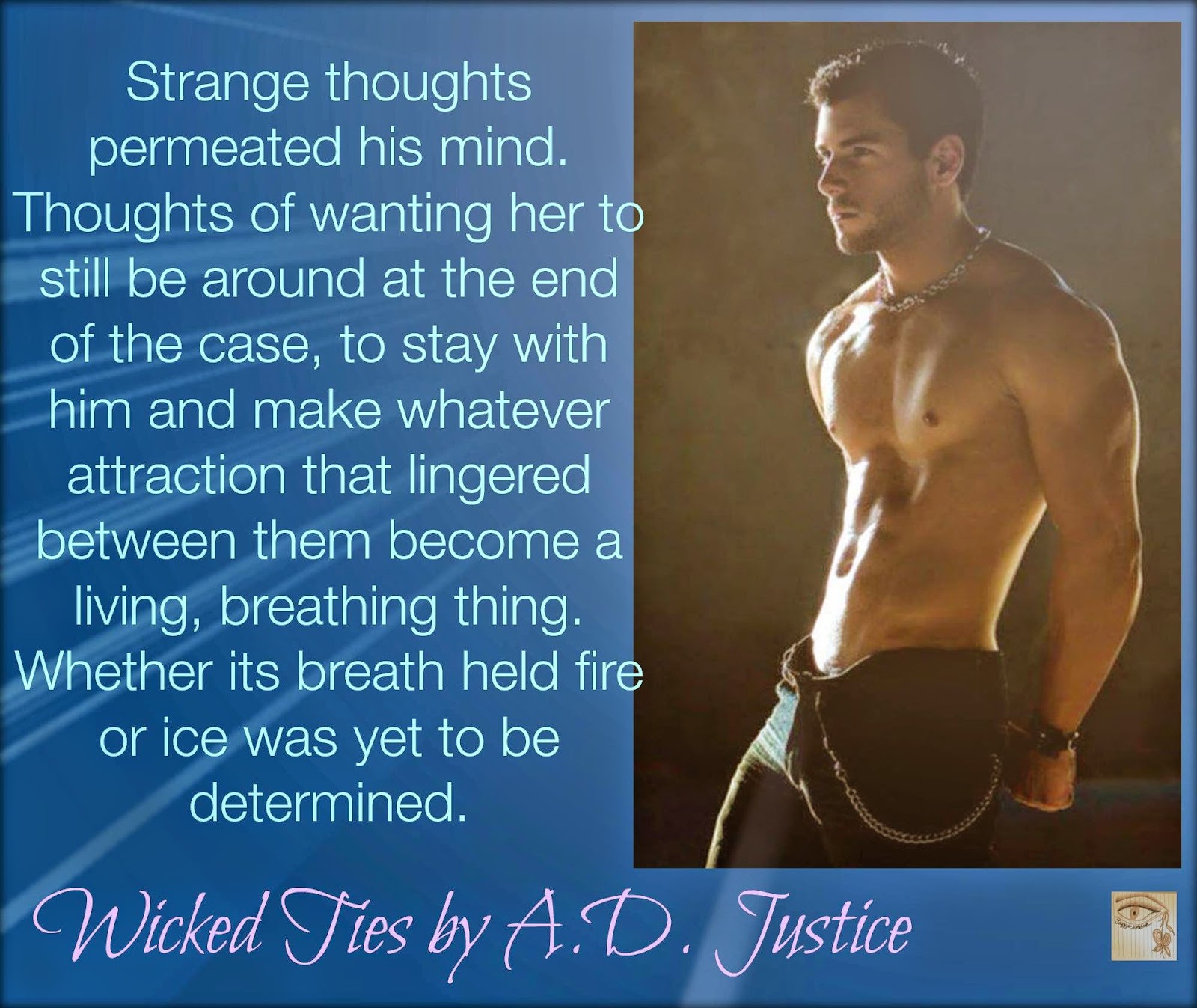 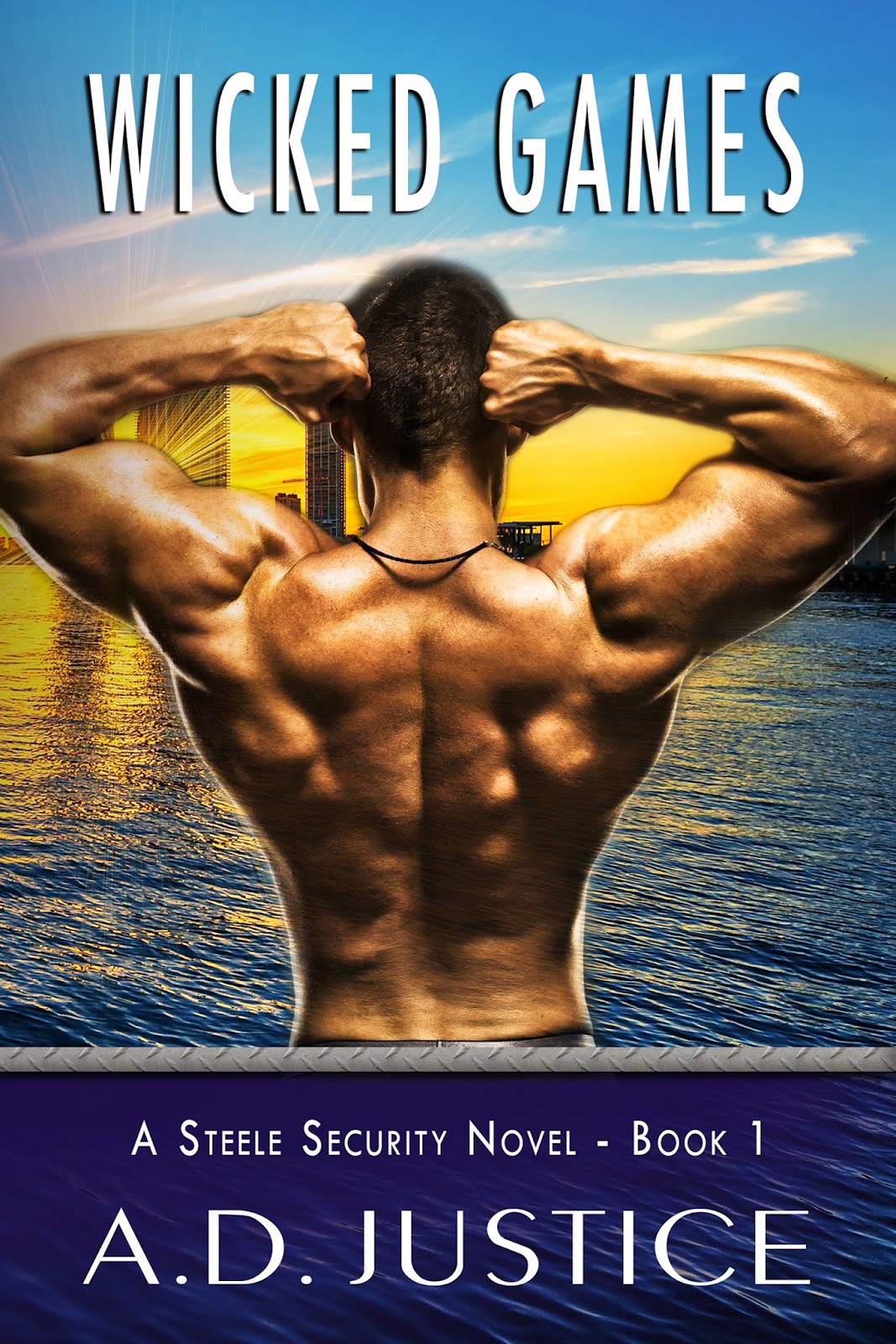 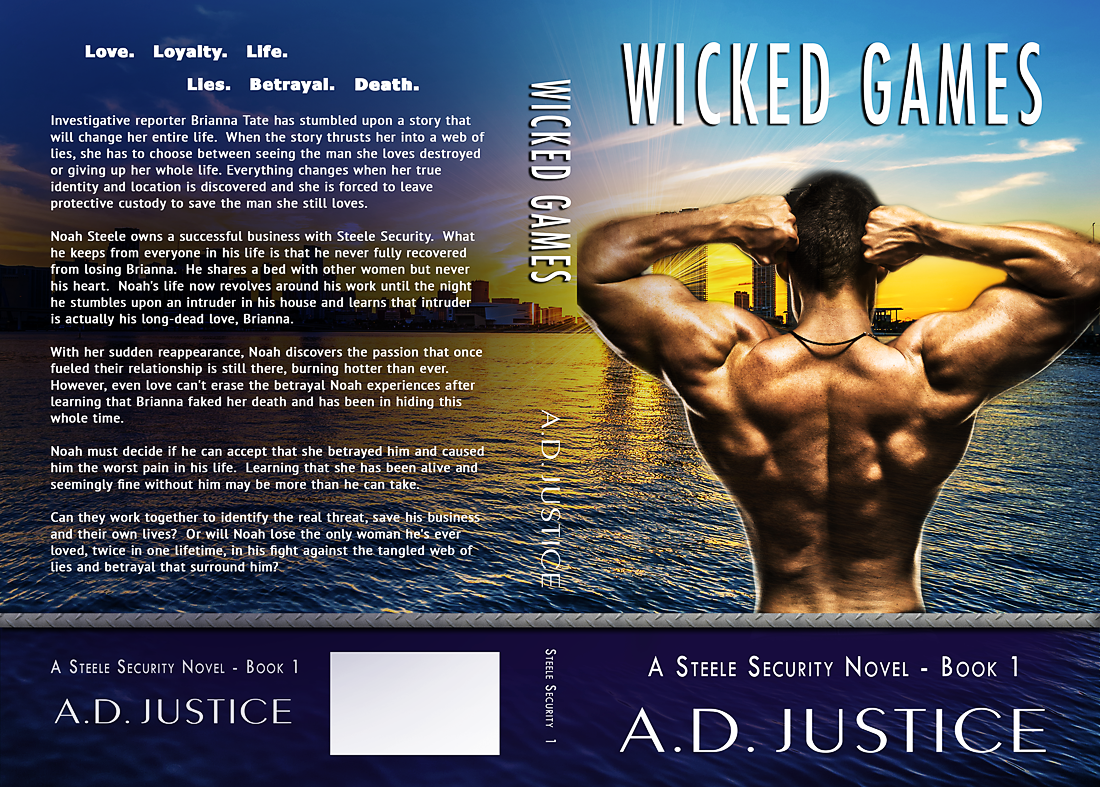 Investigative
reporter Brianna Tate has stumbled upon the story of a lifetime but she has no
idea it will change her entire life. When the story thrusts her into a web of
lies that puts her life in danger, she has to choose between seeing the man she
loves destroyed or giving up her whole life to enter WITSEC. After three years
of living someone else's life, everything changes when her true identity and
location is discovered. She is forced to leave protective custody to save the man
she still loves.

Noah
Steele owns a successful business with Steele Security, providing security
escorts for the nations' top officials, wealthy elitists, and high-profile
visiting dignitaries. What he keeps from everyone in his life is that he never
fully recovered from losing Brianna. He shares a bed with other women but never
his heart. Noah's life now revolves around his work until the night he stumbles
upon an intruder in his house and learns that intruder is actually his
long-dead love, Brianna.

With
her sudden reappearance, Noah discovers the passion that once fueled their
relationship is still there, burning hotter than ever. However, even love can't
erase the betrayal Noah experiences after learning that Brianna faked her death
and has been in hiding this whole time. Noah must decide if he can accept that
she betrayed him and caused him the worst pain in his life. Learning that she
has been alive and seemingly fine without him may be more than he can take.

Brianna's
relationships with everyone at Steele Security is teetering precariously on a
ledge. Loyalty and honesty is key with the men who once looked at her as a
sister but now openly distrust her. Can they work together to identify the real
threat, save his business and their own lives? Or will Noah lose the only woman
he's ever loved, twice in one lifetime, in his fight against the tangled web of
lies and betrayal that surround him?

Recommended for readers 18+ due to language,
violence and sexual content. 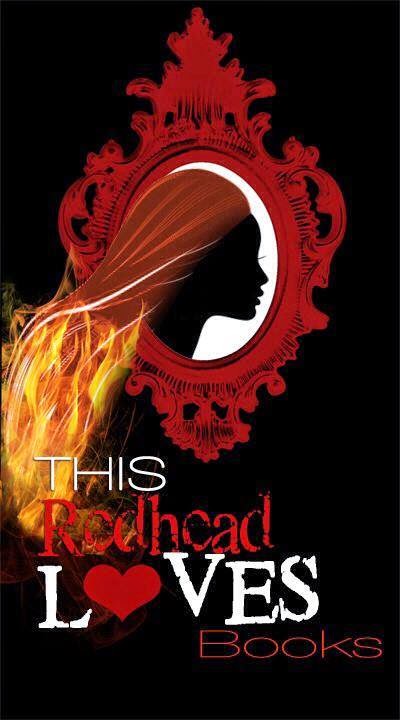