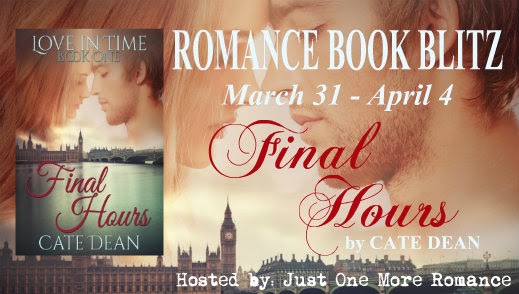 My name is Cate, and I write romantic suspense and paranormal, with some action packed YA paranormal and fantasy thrown in.

I am a huge history buff, and with my English/Irish heritage, I have always gravitated to English history. That love has taken me across the pond on a regular basis for the last 15 years. I got to combine the thrill of being in a country I love with my research addiction. :)
The Love in Time series is the culmination of those trips - and my love for romantic suspense.
Join Cate's mailing list and be in the know: Cate's News and Notes

One man’s death will change the future.Only two people can save him – if they have the courage to trust each other. Elizabeth Barritt fought hard for the life she has, finally putting the ugly memories of a childhood trapped in the foster care system behind her. She has the chance to move forward, to reach out for a new, exciting future, surrounded by the art that is her passion. All she has to do is take the first step. Enter Jackson Kane, who bursts into her life, literally out of thin air. He is a time traveler, on the hunt for a rogue agent. Colliding with Elizabeth is not on his agenda, as much as she intrigues him. When Kane is injured protecting Elizabeth from that agent, she makes a decision that will change her life, in ways she couldn’t even begin to grasp. She takes him home. Once he is healed enough to travel, Kane goes after the agent, chasing him back to war-torn London. But his journey back takes a sideways turn, forcing Elizabeth to make another choice. She follows him into the past, to help him stop one man from changing their future. Together, they learn to trust. What they don’t expect is the connection between them - a connection so strong they can’t fight it, even as they try. Because how can it work, when their lives are centuries apart?


Elizabeth knew, when she saw his eyes change, just what he had planned as he stalked back across the lab. She couldn’t move, could hardly breathe. When he swept her up and his lips possessed hers, she expected a hot, fierce, angry kiss. Instead, his lips gentled, exploring hers. The effect was devastating.

He broke through every barrier she’d spent years building, and she felt her heart open to him, trembling, vulnerable. Both arms reached up to wrap around his neck, and her


fingers slid into his thick, unruly hair. He tasted like mint. She let out a low moan when he eased her mouth open, deepening the kiss. She forgot their audience, forgot her fear of becoming attached to a man who would leave her alone, forgot everything but the feel of his lips, the strength of his arms, the heat of his body.

His hand slipped up her back, tangled in her hair as he angled her head, pulled her in deeper. Heat spiraled through her, and the need to get closer had her arching in to him. She could feel his rapid heartbeat, hear his ragged breath as he started to lose control. Or was that her breath, so fast and hard it made her lightheaded?

Kane broke off the kiss, staring down at her.

“God help me,” he whispered, just before he dove in again. This time it was fierce and hungry, and she rode the wild emotions, abandoning any attempt to hold back. His demanding mouth, the hands curving over her hips and pressing her tight against him refused to let her retreat.

She lost herself in the heat, in the need for another person she had never felt before. A need she protected herself from, in a life that had no guarantees, and more disappointment than she thought she could ever take and stay whole—

This time she broke off the kiss, fighting to catch her breath, terrified that it was too late. Kane rested his forehead against hers, his own breathing just as labored. “I simply meant to say goodbye.”

“That was some goodbye,” she whispered.

“Too much?” Humor edged his deep voice.

With a quiet sigh, he pressed his lips to her temple. “Ready for this?”

His laughter soothed her nerves. “I need you to ease your death grip on my neck, love.”

The endearment had her tensing again. Oh, yes—it was too late. She liked him before they landed in his time. Now she wanted him. How the hell was she supposed to forget the way his lips felt on hers, the raw, uncontrollable emotion he stirred in her?

She lowered her arms, and Kane eased her to the floor. Heat rushed across her face as everyone in the lab applauded.

To her surprise, Kane bowed, flashing a smile. “Thank you, for your good wishes.” He took her hand, nodded to Mac, and led her to the steps next to the platform. Sparks danced around the perimeter of the circle.

“Now I will give you a proper goodbye.” Her heart jumped as he leaned in, but his lips touched her cheek, warm and brief. “Take care, Elizabeth Barritt. Be proud of who you are, live your life for you.”

How could saying goodbye to someone she barely knew hurt so much? Tears stung her eyes at his quiet words. He made it worse by brushing hair off her forehead, his touch gentle, almost more intimate than kissing her.

“Please be careful,” she whispered. Her voice threatened to lodge in her throat, along with her tears. She laid her hand on his left wrist.

“Guy is going to do whatever he needs to do to stop you.”

“The constant twinges will be a good reminder. Not a word, Beth.” His fingers cupped her chin. “I will be ready for him. Now, I believe I need to kiss you again. For luck,” he said against her lips, just before he claimed them.

This time the kiss was achingly sweet, and far too short.

Kane ended it, tracing the line of her cheek before he backed out of reach.

1.      I have been making up stories in my head since I was about five. Full blown, plot
and subplot stories, with multiple characters.

2.      I collect rocks and crystals from every place I’ve been. I even have a bit of
Roman stone from the 2nd century.

3.      I base most of my trips to England around castles, and I have been thrilled and
awed by every one I’ve been able to visit.

4.      I’ve had so many amazing experiences in my years as a traveler – one of my favorites was dancing with a group of Arabic teenagers under a bridge on London’s South Bank. I came across them dancing to a trio of musicians, and they pulled me in to their revelry. I waltzed with three of the sweetest boys, kissed their cheeks, and went on my way, smiling the rest of the night.

5.      I love to travel on my own. The absolute freedom, the immersion in the places I
go, the people I meet – I wouldn’t travel any other way.

6.      I grew up with the twins who played Tabitha on the series Bewitched. I am still
friends with one of them.

7.      I love cemeteries, and have visited my share – every type from the huge and
spooky Necropolis on the hill overlooking Glasgow Cathedral, to a small
graveyard surrounding the old church on Dover’s high street.

8.      I am a huge Doctor Who/Torchwood fan – and I went all the way to Cardiff
Bay to see where they filmed Torchwood. I’ve even touched a
TARDIS, and stood eye to eye with K-9.

Welcome Cate Dean, and thank you so much for taking time

out of your busy schedule to sit down for an interview with us. Can you tell us

a little bit about yourself?

I am a romanticsuspense and paranormal author. I have been writing since I was in first grade – I still have the illustrated science fiction story I wrote for a schoolcontest. I am also a huge history buff, a travel addict, and a photographer. Heading over to England every year hits all three addictions at once. I love how travel opens my mind, feeds my spirit, and changes me, every time I go. I am a visual writer, and I love being able to walk where my characters walk, to feel and see what they experience in the story.

Tell us about your work. What are you writing now?


I just wrapped up my paranormal series, and my focus is on my romantic suspense series, Love in Time. Book one is out now, and I have plans for quite a few books in the series.

Where do you draw your inspiration from?


Everything – what I watch, what I read, where I go. Travel has been a huge inspiration for me. Since I travel on my own, I get to live as a temporary local, and experience more than I would have as a tourist just passing through.

When did you first realize you wanted to be a


When I was fresh out of high school. I was a theatre major, and I started writing fiction on the side. I gradually blossomed from there.

What was the first romance novel you read that made an


The Flame and the Flower, by Kathleen E. Woodiwiss. It was the only book I read by her, but it sparked my love of romance.

What do you do while you write? Do you listen to music,


Depending on what I’m working on, I listen to music, or have the TV on in the background. I rarely write in complete silence – I started writing in bookstores, with the sound of voices swirling around me as I created my own worlds. I still write at my local Barnes & Noble at least once a week.

Tell us 3 surprising things about yourself.


1. I am incredibly limber – and yes, I can still do the splits, on both sides.


2. I am a direct descendent of Betsy Ross.


3. I can write in iambic pentameter – yes, I am a Shakespeare geek.

What’s the last movie you watched and loved?


I love movies, and I’ve seen a few since watching this one, but I thought Argo was brilliant. Even though I knew the ending, the suspense, and the question of how drove the story. I could go on and on and on about the movies I love, so I’ll stop now.

What’s your idea of a perfect date?


An intimate dinner, a walk on the beach, kissing to the sound of waves crashing on the sand.

If you could take a romantic trip anywhere, where would


The Dordogne Valley, in France. Gorgeous countryside, castles, a winding river, and medieval villages – it has everything I’d want, and more.

Do you believe in love at first sight?


Absolutely. I had it happen to me, my first day of school in sixth grade. The world did really stop, for the first few seconds I saw him. He became my best friend, and we were inseparable, until he moved right before high school.


1. Take the Red Carpet Lord of the Rings tour in New Zealand.
2. Stand on every continent at least once.
3. Have my book on the NY Times bestseller list. J

Can I say both? I love both.


Brains – muscles are pretty, but brains are – stimulating.

Planner or Wing it?


Both – it depends on the situation.


London Fog (Earl Grey tea with milk), on a cold morning in


Desktop at home, laptop on the go.

Thank you so much for taking the time to let us interview you Cate Dean.

Posted by multitaskingmomma at 6:30 AM