NEAL CORMAN is the Corporate Executive Chef of the Alicart Restaurant Group, where he's been since 2010. He is responsible for maintaining the quality of every piece of meat that comes out of Virgil’s 1,400-pound Southern Pride smokers. CHRIS PETERSON is a writer and editor based in Ashland, Oregon. He led cookbook development for three publishers over 20 years. Peterson is the author of twelve books, and has written books with Sabrina Soto, Carter Oosterhouse, and Brian Boitano. 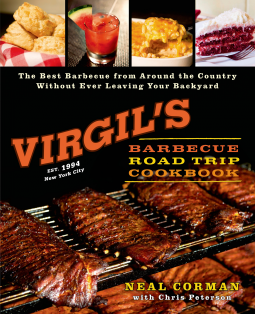 
Open Virgil’s Barbecue Road Trip Cookbook and you’ll find a winning mix of barbecue and grilling recipes plus perfect summer sides for quick weekday dinners and relaxed weekend entertaining. Tapping the secrets of the best ‘cue from Texas, North Carolina, Kansas City and Memphis, Virgil’s has tested and tasted it all until the ninety-eight recipes in this book are foolproof for home cooks and backyard grillmasters.Virgil’s Barbecue Road Trip Cookbook has the instructions you need for anything you’re in the mood for: get serious and do some smoking, in either a basic kettle grill or dedicated smoker, or stay casual and sample some rubs and marinades for succulent grilled meat, fish or vegetables.You’ll make--Beef: from True Texas Brisket to Chicken Fried Steak with Country Gravy to a Kansas City Burnt Ends Sandwich--Pork: from Baby Back Ribs to Boston Butt (the Virgil’s Way) to Slow-smoked Ham--Poultry: from Classic Pulled Chicken to Kansas City Fried Chicken to Jerk Chicken--Rubs, Marinades and Sauces: from Virgil’s meal-making Universal Flour to Carolina Vinegar Sauce to Alabama White Barbecue Sauce
Surrounded by unstoppable sides and sweets, such as Southern Accent Cheddar Grits, Georgia Pecan Rice and Virgil’s Perfect Banana Pudding, Virgil’s barbecue is about to change the way you eat and entertain: this food will make you happy!

Virgil's Barbecue Road Trip Cookbook couldn't have arrived at a more perfect time, since it's the start of summer (seasons work differently in our part of the world). Neal Corman's impressively generous collection of Virgil's favorite restaurant offerings are everything that screams "Summer cookout!" and I had a really hard time narrowing down which recipe I would test - the ARC was practically red by the time I was done reading through it.

This cookbook isn't hard on the eyes, either. Almost very other page has a mouthwatering picture of a Virgil's specialty that would make you wish it was a scratch-and-sniff book as well. Nothing better than the smoky smell of a long marinated chunk of meat slooowly barbecuing over the coals. Drool! The instructions are precise and clear, so they're extremely easy to follow. And thank you, whoever decided to add a beer pairing to each dish. Nice touch.

First on the menu was Smoked Corned Beef (p195) that was prepped for St Patrick's Day dinner. I don't think I would ever go back to unsmoked corned beef after this! It added such a deliciously rich taste to the corned beef and cabbage which was glaringly absent from the other recipes of corned beef I've made before. That was such a "Duh!" moment. Talk about face slap for not doing this sooner! 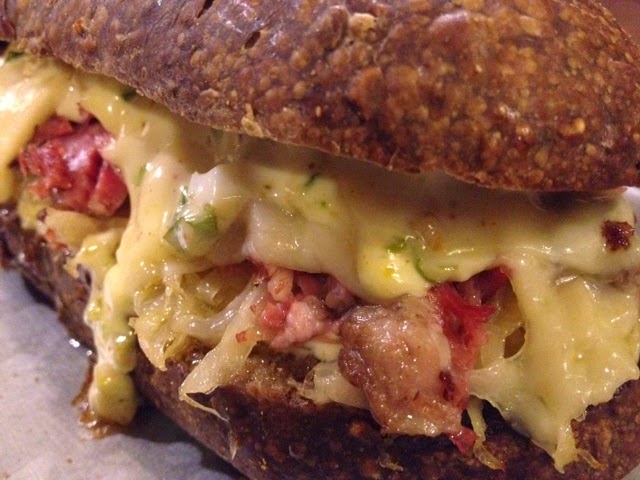 days later. This also entailed whipping up the Thousand Island Dressing (p72). I'm not a big fan of mayonnaise anything but this is one dressing I can make - and eat - over and over again. Thankfully, it doesn't include the cream called for in my Mama's 1937 Boston Cooking School Cookbook. The addition of two kinds of pickles apart from the onion and olives cut through the richness of the mayonnaise and provide a piquant contrast to the palate while a chopped hard boiled egg adds interesting texture. I miss the Worcestershire Sauce, though.

May I say dinner was a success? There was a real balance of flavors in the sandwich and it was so juicy, the plate was swimming. The family was uncharacteristically quiet during the meal; a sure sign that the food was more focused on than anything else! 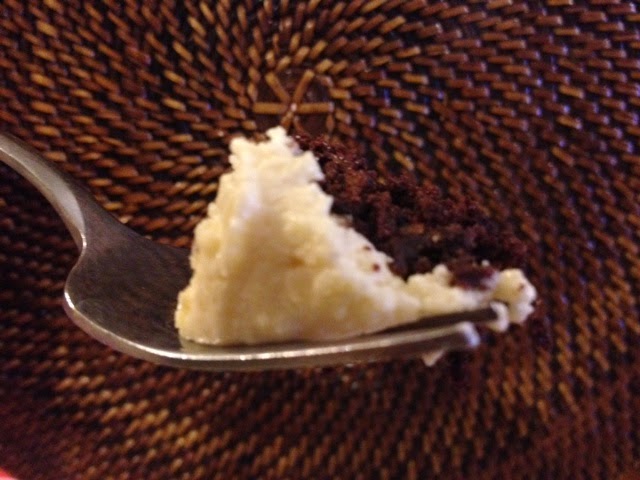 Dessert has to come next, naturally, and the kids voted on Carrot Cake (p237). The differences? Fresh pineapple instead of canned, cocoa, and no raisins. (Memories of Ambrosia - because of toasted coconut - were revived. I might just add chopped fresh orange pulp and orange zest on the next the next go.)

I noticed the recipe didn't call for salt, so I added a generous pinch in with the oil and sugar. It beat up nice and thick, and came out a gorgeous matt brown after baking. The cream cheese frosting was an easy one, too, not too sweet and plenty tangy. One caveat? Use a mixer for this recipe! It's heavy to beat up by hand and I'm used to putting together bread dough without machines, so I know what I'm talking about. But this cake is fantabulously moist, rich, and delicious.

There are definitely more recipes that are going to undergo my "testing" from Virgil's Barbecue Road Trip Cookbook throughout this summer. What can I say? It's a tough, thankless job but someone's gotta do it!