Release Day Blitz: Revealed by You by Jo-Anna Walker

About The Author
When Jo-Anna isn't working her Monday-Friday 9-5 job, she's spending her time reading, writing and with the love of her life. She's an all-around Canadian girl. Born and raised in a small city.If you don't see Jo-Anna writing, you'll find her with her nose in a book. Whether it's her words or someone else's, she's drawn to it. Jo-Anna loves stories with Alpha broken males and that need to be ripped apart and put back together again. Men that fall to their knees over a wink or a giggle from their females. Two things you will never find Jo-Anna without; her cell phone and lip gloss. If she has both of those items, you have a happy girl.Since starting her writing adventure in 2013, Jo-Anna has met many people, real life, online, in her head and she loves every single one of them. Without the support from others, none of this would be possible and she's grateful for all that has been given to her.
To learn more, visit Jo-Anna on her blog, on Twitter,  Facebook, Goodreadsand Pinterest.Jo-Anna Walker is also author of Break Me, Always Me, Remember Me, In the Heart of Forever (A Heart Story) and Possessed by You and Uncomplicated that she co-wrote with Dawn Robertson. Add to Goodreads 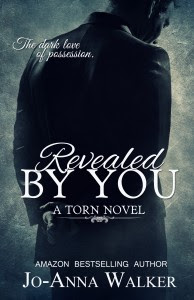 The sharp edge of love…
Brett MacLean was possessive. Even more since I became his. He was my desire…my ultimate pleasure…he was mine.
As each day passed, he revealed a part of himself that had lain dormant. A broken childhood. A troubled man. One I was determined to help.
After months together, I thought I knew him. But soon realized I was wrong. His dark secrets were only the beginning. The past was more disturbing than I ever could have fathomed.
His deep seeded need for me came with a price that could have consequences. I needed him just as much. Because of this, we would be tested. My greatest fear was that it would take us beyond the limits of our love.

People may not believe in love at first sight. The first pull. The first thing that tugs at your heart, leading you to that person. Hell, I definitely didn’t. Not until I met him. My best friend. My lover. Four weeks, three days and eight hours had passed since I’ve seen Brett MacLean.
The day he left for New York felt like a lifetime ago and I couldn’t wait to see him again. For him to come home. We weren’t living together yet but I spent every day at his apartment, needing to be close to him in some way.
Although video chats were a new thing for us, it wasn’t the same. I missed his touch, his hot breath against my skin, him telling me what he wanted and how he wanted it, the dark possessive air about him as he claimed me. Even though he was dark and brooding, demanding and controlling, I gave in willingly.

I slowly rose to my full height and found Brett standing a few feet away from me. His suitcase in hand, aviator sunglasses on his handsome face and four buttons on his white dress shirt unbuttoned. My stomach flipped, my heart thumping hard against my rib cage at the mere sight of him. God, he was beautiful. Possessive and dominating, dark and sensual. Sex rolled off of him like a cool morning fog.
He pulled off his glasses, his blue eyes locking with mine. A smug smile formed on his hard chiseled face. A dark line of scruff covered his jaw and I couldn’t wait to lick every inch of him.
My body bloomed, needing his hands on me after so long but I was frozen. Captivated by his deep blue stare as he stalked towards me.
He handed the driver his bags and closed the distance between us. He cupped the back of my neck, brushing his thumb over my bottom lip. “Hi my Evvie.”
Hearing him claim me by just his words, made my insides quiver. “Hi,” I breathed. My heart gave a thump. I swore my insides just turned to mush.
He smirked and leaned down to my ear. “I missed you.” His lips brushed down the length of my jaw. “I’ve missed your smell. Lavender. Vanilla. Me.”
My heart thumped hard, pounding in my ears as he held me restrained just by his hand and mouth. I couldn’t move even if I wanted to.
His fingers brushed down my cheek before capturing my mouth in a hard demanding kiss.
My lips instantly parted, taking his tongue deep inside me. The feel of his warm lips against mine after all of these weeks ignited something I hadn’t felt in a while. A wanton need spread through me. I gripped his shirt, pulling him against me. More.
A soft groan erupted from the back of his throat as the kiss deepened. Pushing me up against the side of the town car, his hold on the back of my neck tightened.
I moaned, sucking and pulling at his tongue.
He chuckled and released my mouth, trailing kisses down to my ear. “I’ve missed you so much, lover,” he whispered.
“Hmm…I’ve missed you,” I said, leaning my head to the side.
“I can’t wait to do nasty dirty things to that hot little body of yours,” he growled in my ear, inhaling deep.
I bit my lower lip to keep from panting and brushed a hand down his hard chiseled chest.
His teeth grazed up the side of my neck. “I can’t wait to get you alone.”

I smiled and placed a soft kiss on his lips before he pushed me back on the bed. For the rest of the night, Brett gave me what I needed from him. What I craved.
Through these months of being with him, I had learned so much. His feelings revealed, his past laid out before him, his true desires on display. For me.
His passion, his love, his dark possession consumed me. I was drowning in him and as each day past, I fell further and further into his depths. Not wanting to come up for air in the least.
He gave me him. All of him. Revealing a part of himself that he never shared with anyone. The once broken boy that grew up into a strong and powerful man was mine. It would take a while for him to heal, to get over what had been done to him but I would be by his side every step of the way.
Only I knew the real Brett MacLean.


Watch the trailer....
Revealed By You by Jo-Anna Walker