Review & Author Interview: Presence (Presence, #1) by Perie Wolford [Get a chance to win a copy!]

Leave a comment below to get a chance to win a copy of Presence. Thank you Perie Wolford for donating a copy of your sci-fi novel. 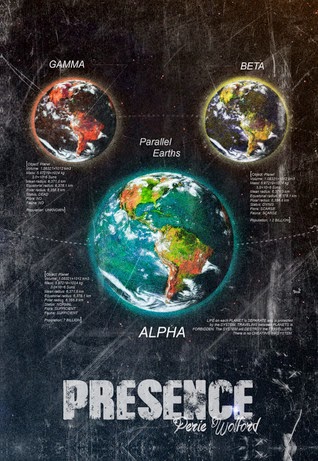 Telling a story about the importance of survival within any circumstances, however strange, and showing a girl-in-a-man’s-world angle, Presence is a novel about Samantha, a woman in her late twenties, both smart and attractive. One day, Samantha’s regular life is suddenly turned around as the fact of her existence is somehow erased from the world. Nobody seems to remember her, her own apartment is occupied by the uninvited tenants, and even her sister, the only family Samantha has, is unable to recognize her. Lost and confused, Samantha accepts help from a stranger, a charismatic man named Archie, whom she accidentally encounters and unwillingly joins him in his fight against the silent invasion of the planet, Alpha planet as he calls it; and he himself happens to be a soldier from a parallel one, Beta. The glass wall put between Samantha’s new life and her former life makes her discover the roadside of the world, dark and silent, the hidden place where her primary instincts come to the surface and she finally feels the urge to fight for herself and for others.

I have read sci-fi/fantasy novels, graphic novels, even comic editions for so long now and drop on this genre once in a while to take respite from the romance novels I normally read. One of the things that attracts me to this genre these days is the artistry of these novels in both text and graphic art. Thanks to sci-fi-based technology we now take for granted, more and more artists and authors find it easier to get their ideas across. One of those authors is Perie Wolford.

I am not unfamiliar with this author's work, in fact, I must admit that I am very familiar with it. However, I have ignored his sci-fi works until I stumbled upon this little digital booklet while going over his site and I took interest to read it. It was for Free, so what was I to lose? Nothing. However, I quickly found myself lost in the worlds he created, spurring my curiosity of what this book may be all about. And boy, was I surprised!

Presence is Samantha's story, a magnetically young and beautiful woman on the brink of losing herself to the noise. This noise (best described as white noise) had been in her head for some months now, insidiously taking over her every waking and sleeping patterns. As her personal life falls around her and  her grasp on sanity gets questioned, she stumbles into a reality that involved parallel worlds, non-existence, soldiers and the System.

One by one, what she knew of as 'reality' gets taken down and squashed. She discovers a truth that involves a dying parallel world called Beta which  people are now silently invading her planet; that there are rules to take to heart or be erased by the supreme System; that she needs to follow these rules so she could get her life back by stealing the lives of others to pay rent with the use of the trap balls, and that her life could change dramatically thanks to the Blue sunrise and the liquid. Confused and unaccepting of her new life, Samantha plunges herself into this new world with a vengeance, fighting from within the System like a seasoned soldier. As this new Samantha rises, we see a soldier of firm determination and a perseverance that could only be admired and hated from afar by the elite of Beta. Reading Samantha's story unfold, her world is seen as a constant whirl of betrayal, confusion, trap balls and men.

The best way to describe Presence is a matrix: where the world of man collides with a Supreme one, they learn to take it apart and discover its individual properties and eventually learn to manipulate it to their own advantage. What is known on Earth (Alpha) as God, those on Beta know it as the System. These are two different worlds with supposedly different fates, but with Beta dying, and the third world Gamma an inhospitable desert, there is only one certainty: invasion.

It was not very difficult to understand this book, thanks to the Digital Booklet. With that on one hand and this novel on the other, it was quite easy to connect the dots and come up with a full picture. It was quite easy to understand what the noise was all about, thanks to the video trailer. With these tools, I got submerged in Samantha's world and was just plain intrigued.

The author has created a world that aroused my curiosity. It was confusing and fascinating all at once. With a light touch, he was able to quickly set the pace to such depth that it amazes me how he could get the story lines straight. There are a lot of things going on here, most of which is best left to the reader to discover for themselves, but one thing stands out: Samantha's adventure into the unknown is like drowning in a dark world of the fight for survival. As her character evolves, she is revealed to be a very strong heroine, the likes whom are only found in some of the more outstanding heroines of science fiction. She is a determined fighter who is willing to make use whatever tools she could to survive and fight the System that is insidiously invading her planet. Even if she has to sacrifice her life.

For those who love the intrigue and all things science fiction, Presence is one book not to missed.

An Interview with author Perie Wolford on Presence:

M: What is the System? Is it a machine? Or some supreme being?

PW: It's not machine-generated... the System is a synonym of God... just that Beta soldiers learned how to operate the system that was already there, kinda like we've learned how to split atom and get energy.. but we didn't invent an atom or atoms . System = Fate = God.

M: So it's like a matrix where the system is of supreme origin but was 'hacked' by the betas and used for their own advantage?

M: What influenced you while writing Presence? I see a lot of the Matrix make-up here...

PW: I confirm that I am a Matrix fan.  Actually Matrix has a lot of similarities with some religious teachings... but yes, let's say Matrix was a bit of inspiration...

M: On Samantha: you said that she was you in a some ways?

PW: Well, first of all, any writer gives a hero a big chunk of its own personality... that's a given...
When, I started writing Presence... I couldn't go past chapter 1 for some reason, past that noise... Let's just say that Presence is now very personal.  I didn't mean it to be, but it turned out that way.

M: I was saying earlier, I saw quite a few parallelisms on some of the strongest female sci-fi/fantasy characters in Samantha. She's like Trinity but not...

PW: Maybe.. but I wasn't using Matrix as a source of inspiration like I did Sixteen Candles in T16... maybe my feelings about what a bad-ass heroine should be like mixed with what I have already known about bad-ass heroines...

PW: I was finishing Presence right after I finished Hunger Games and Games had a huge impact on me... so maybe a lot of Katniss - grown-up version.

M: Well, the parallelisms are quite 'in-your-face.' These women all survived a huge loss or went through tough times and were not afraid to use whatever means to survive ... Katniss?

M: Okay, so we have Samantha: sexually liberal and a survivor living using her survival instincts to the fullest without regret. Right?

PW: I wouldn't say she had any survival instincts in the beginning... she learned it all in time.... her sexuality came out of depression and sex is a pretty good antidepressant.

M: How about the parallel worlds? Not much was said about the hows and whys of Gamma = will these be revealed later in Beta?

PW: Okay, Gamma is supposed to be the 3rd book... Frankly, I was planning a trilogy... Alpha (aka Presence), Beta, Gamma... as book titles.... so in the end of Beta book Samantha will get to Gamma the same way she did get to Beta in the end of Alpha. Does it make sense? Gamma is a desert basically. It's about dead... but you can still be there, for a while... it's not like it's Mars or something... just not much water or food around... a lot of sand.  I have actually written a few thousand words of Beta and there's an explanation about the sand and why the planets are dying...

M: Oooh! Interesting. Okay, now for that travel between the worlds, how is that? This is the mystery for me...

PW: Okay... let me think of something... how does Terminator travel in time exactly?

PW: ...and didn't I mention that Beta people built machines to operate the system and stuff.... the thing is, I really didn't want to concentrate on the technology behind it, I wanted it to be a personal story, not as much sci-fi, sci-fi is a decoration only.... plus more explanation will follow in Beta book... cause it's all about Beta planet. The machines are made by Beta people, same as the rest of their devices.

M: So basically, you are saying, these technical stuff will all be revealed and explained in Beta?

PW: yep.... as I said, I didn't want to get into details of how machines work...  I was after Samantha's personal experience amongst all that. As for Beta, let's just leave it to this: Beta is gonna be even more of a hot mess

M: Thank you Perie! This was an enlightening interview and definitely cleared up more of the mysteries of Presence. 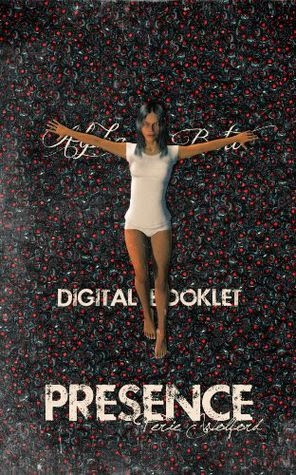 A descriptive Digital Booklet for Presence sci-fi novel by Perie Wolford, with posters and illustrations by the author.

Giveaway: Don't forget to leave a comment to get the chance to win a copy of Presence. Thank you Perie Wolford for donating a copy of your sci-fi novel.

Posted by multitaskingmomma at 8:35 PM