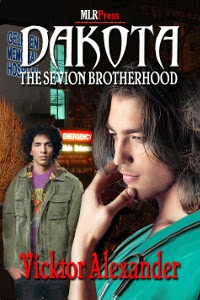 When Dr. Dakota Sevion is drawn to his mate Nishon Moore at the hospital where he works, he is overjoyed, even though Nishon has a son, Isaiah, who is a forziq, which is an instant death sentence and someone from the past is determined to kill them all.
Dakota Sevion loves being the Chief of Surgery at Gelreen Memorial Hospital, because he has unlimited access to blood which is good for him as an unmated vampire. When he's called to the ER for an emergency his life changes forever.
Nishon "Nimo" Moore is a single father of three year old Isaiah, a very special little boy, and when Nimo rushes to the hospital because Isaiah has been hurt he ends up meeting Dakota and finding out that vampires are real. He doesn't handle it well, which isn't good for Dakota who will die from starvation if their mating isn't consummated soon. But that isn't the only problem. Someone from the past is set on killing them all.


The Sevion Brotherhood: Dakota is the first installment to what could fast become an addiction for me. This first book is about the youngest of the brood: Dakota. Named after the state he was either conceived or born in like the rest of his brothers, he is a born vampire from a long and illustrious family line straight out of the history of Romania. His parents raised him and his brothers to be loving, caring and scary vamps who look out for each other within the family. So of course, we get this huge hunk of a vamp who is also a surgeon. When he is asked to assess a little boy in the E.R. he never expected to find his sufletul pereche, his soul mate, in the father. Now, he has right about two weeks to seal the bond of mates or he can turn rogue, commit mass blood-sucking murder and be put down. No pressure!

Nimo Moores is professor of mythology in a University, comes from an affluent family, a single father and gay. Never imagining this trip to the E.R., where his son was lying hurt, would bring him up close and personal with the sexiest and biggest Chief of Surgery male specimen. Or that he would be a vampire's mate. Never did he imagine his son, Isaiah, would be something more than the lovable and super intelligent little boy that he is. Or that their lives would be in danger from those he considered the bane of his existence: his parents.

After waiting for so long. After being teased for some time. Vicktor Alexander finally releases his latest series of men who growl and bite and are just plain lovable, huggable beary-vampires. Needless to say, I am one happy camper here. I get my Alexander dose of paranormal loving.

Now I have to wait it out till the next installments! No thanks to that ending!

Is it bad of me to be so impatient for the release of the next books?

Well, for those of you who are thinking what this may be all about, just pick this up and READ!
Posted by multitaskingmomma at 7:34 AM