Review: A Gay Romance (A Gay Series #1) by Gina A. Rogers, Kyle Adams 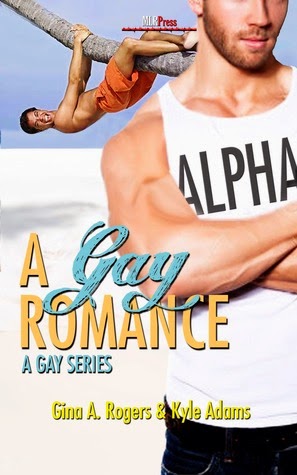 A Gay Romance (A Gay Series #1)
by Gina A. Rogers, Kyle Adams
Amazon


Where can a sexy alpha cop and the hottest man on the planet solve a murder, save a fabulous plant, fall in love and discover an endless supply of lube? Homosapia, of course, where absolutely anything gay is possible.
All American Ram Rage is a dedicated officer of the law. He hates crooked cops, communicates in growls and loves his applesauce. But when the town heartthrob calls in a stiffie—pun intended, Ram is drawn into the web of a sadistic killer who is every gay man’s nightmare: a vagina. The investigation leads him on a wild chase involving a sassy retired stripper, a strange little town and, of course, crazy hot acrobatic stunts of an intense sexual nature with the gorgeous man at the center of it all.
To meet Kory Pleyes is to instantly fall in love. Literally. However, Kory has never returned those feelings until the moment sexy alpha cop Ram Rage comes barging, lights and sirens, into his life. Kory’s friends keep popping up dead, but it’s NBD and provides Kory with the excuse he needs to cling to the one man who doesn’t seem to mind that he’s a slow poke—this pun also intended. When the killer threatens the man he loves, will Kory be able to protect him with nothing but his average wits and incredible charm? Duh! It’s Homosapia, where anything gay is possible!

Why did I pick this up? Well, I saw the title and I got attracted. Then I saw the goofy guy hanging from a tree branch looking adorably gorgeous and I got curious. Last, I read the blurb: and I burst out laughing. Okay, I am intrigued.

This was a laugh from start to finish. Talk about puns, puns, and more puns thrown left, right, front, back, overhead and underneath! The name Kory Pleyes sent me to giggle as I was actually visualizing him do the nasty hehehhehehe (stop those thoughts! I meant the ballet move: plié. tsk tsk). Then there was Alpha Ram whose rage over the loss of his applesauce was just too ridiculous but very understandable especially after learning the why of it. Then of course, there was the city itself, Homosapia. That is another pun of puns and very well intended.

Thinking that Kory is the ultimate gay man here is a major mistake! There are soooooo many gay men around here I was left breathless from all of their antics and their manipulations..... it was exhausting trying to keep the giggles in. When the murder happened and the velvet got involved? Oh my, what did these two authors think: try to kill their readers?

I won't spoil the deets, there are deets galore. But know this: A Gay Romance is a romance, it is erotica, it is mystery/thriller/adventure AND melodramatic to the max! It's sickening! (go get the def for those who don't know the slang!)

One of the more relaxing ??? not sure if I could honestly say that ??? reads in a long time.

Looking forward to plant's story!
Posted by multitaskingmomma at 9:00 AM