Review: Geek in the Woods (Geeks in Nature #1) by Cheryl Dragon 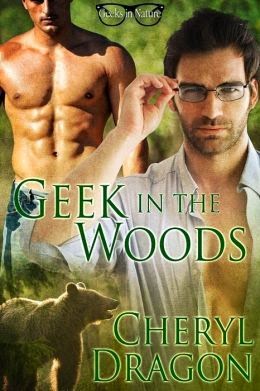 Major construction disrupts more than Ray Hooker’s life; it rattles his small town with a secret.
As sexy genius Eric Ridgeway continues building his state-of-the-art think tank, the town’s shifter population is terrified their identities will be uncovered by the group of incoming scientists. When fear drives vandals to slow construction, Ray helps Eric defend his property. Their relationship heats up and, in order to protect Eric, Ray reveals that he’s a bear shifter.
Now, not only is his secret out of the bag, but Ray needs to decide if loving Eric is worth the risk of discovery by other scientists. None of that will matter if their newfound attraction can’t outlast fear, lies and distrust!


Geek In The Woods is the first installment of the Geeks in Nature series by Cheryl Dragon. As  a first book, it immediately gives the reader the feel of a first installment. There are many characters being introduced, the set up of the why and how a certain geek becomes the beloved of a shifter is established, and the town itself is introduced.

Set in the middle of a small town in the middle of nowhere, Eric Ridgeway, geek extraordinaire with a political family background, sets up shop: The Think Tank. It is a facility which will probably drive all geeks crazy with need to maybe to touch the equipment and grant monies. The Tank's vision is to finding politically correct solutions to everyday climate change problems. Solutions that mega corporations will actually use without undermining their own motives of never spending money for the good of the planet. The only hurdle in this task of Eric's is the town itself. Introverted by nature but forced to be out in the open, he strives hard to assimilate into the town's populations without causing much waves. Easier thought and said of than done.

Ray Hooker, bear shifter and town pacifist, takes up the cause of finding out who this geeky Eric is. They know he has money, they know he is highly intellectual, and they know he is setting up the Tank. What they need to find out is if Eric can be trusted enough that should he stumble into the town's secrets, the secret would not be sacrificed in the name of science.

As Eric and Ray begin their tentative relationship, frightened shifters take cause to scare Eric and friends away. In the midst of all the low drama and intimate encounters, the mysteries unfold and the panic escalates.