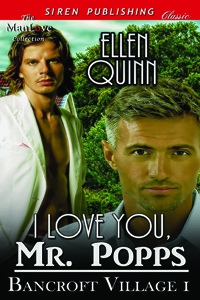 [Siren Classic ManLove: Erotic Alternative Romance, M/M, HEA]
Martin Popplewell is a middle-aged, closeted history teacher who has no idea he had been the young gay students' secret heartthrob.
Simon Wilde looked across at his new neighbour and knew he had to get to know this gorgeous shy man and confident teacher better. Little does he know what he will have to go through to find this out?
Martin never expected to be the hottest topic of conversation at Bancroft Academy, yet after one casual dinner with Simon, his name is practically in lights. For a very private man, having his students stand by him is a gift he would not refuse.
Falling out of Martin’s tree had not been Simon’s intention, nor had becoming a godfather in the same evening, but they say everything happens for a reason.

Take a look at that cover: that is the reason why I one clicked.

This is the story of one, deep in the closet kinda guy called Mr. Martin Popplewell, a.k.a. Mr. Popps, the subject to fangirling from his students for the last twenty or so years. And it's not just the students who fangirl, the female teachers do, too. But somehow, no one has managed to hook this man. Until Simon Wilde.

Simon Wilde is his new neighbor. The grandson of the former owner of the home right next door, he comes into the home and straight into the heart of Mr. Popps. Thing is, it's not really being deep in the closet that manages to get this confident prof  hesitant on a possible relationship, it's because Simon is years, years younger than he is.

Until Simon and he went out for dinner and weeks after, Simon falls off Martin's tree. No thanks to the nasty madam of a cat who managed to get up the highest branch - unless you blame Simon's dog for chasing her up there. The result was a disastrous, and hilarious, trip to the E.R. and Martin having to care for Simon for the night.

I Love You, Mr. Popps is a light-hearted, romantic comedy that is easy to read and imagine. It is quite a visual read and this really pleased me no end. I especially loved the POV of Bingo. Yes, the dog. I loved his naughtiness as well as his cuteness. And really, this is how the book is written: all cutesy naughtiness from both the human and the canine perspective. This was quite entertaining and ends with the HEA I love.
Posted by multitaskingmomma at 12:01 AM