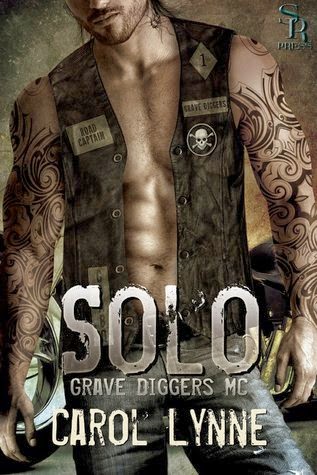 Sam “Solo” Braun lives by one truth, the Grave Diggers Motorcycle Club above all. The creed has served him well, giving him the only real family he’s ever known.He would die for his brothers and them for him, but they don’t know he prefers men over women. Coming out to a group of men who fear no one isn’t high on Solo’s priority list, especially because he’s never indulged in more than one night stands.
Everything changes after one night with Eric James. For the first time, Solo can’t stop thinking about a single night he’d spent with a man. When fate intervenes, Solo comes face to face with his blue-eyed obsession only to find out Eric is a cop. Solo hates cops, and so do his brothers in the club. However, Solo decides to gamble everything and spend more time with Eric under the guise of getting information.
Falling in love with a cop is a very dangerous proposition for a man in Solo’s position, so why can’t he walk away?

Carol Lynne is one of my guiltiest pleasures, especially her Campus Cravings series. Now, mind you, there are some books which are a miss for me, but I am such a sucker for her works and different plots so don't shoot me when I say: I totally loved this first installment to the Grave Diggers MC series.

First off: I loved that cover. I am not really one to have a tat on me or mine but seriously? I love looking at them when done very well and this cover is just drool worthy.

Second, I love cop stories and biker stories. That the author decided to merge the two means something is cooking here that may just be very different.

In Solo, we have a biker guy who falls seriously for a one-night stand he could not forget. Yes, this is a case of insta-love but true to his personality, he does not bother to connect with that perfect man and just goes through his life with his adoptive family of bikers. A skating-on-the-edge-of-crime bunch who are rough and tough. This biker club does a lot of things for the community like take pay for protection. You know? Gang stuff. There is one thing different though: they watch out and make sure that no bad drugs are going around their turf and if they find the violator? Think six feet under and no bodies. So imagine Solo's fears when he reconnects with that perfect guy and he turns up to be a cop? There is also the fact that the bikers are not so connected with gay men.

Eric had had a tough life growing up an orphan and treated like a ping-pong ball passed from one foster home to another. The only individual who took time out for him was a cop so when he grew up, he decided to make it his career choice. Thing is, he is getting a bit disappointed with the politics involved, and some are not so legal. He gets to seriously think over his career choice when he reconnects with his one-night-stand alpha biker. Solo is someone he just jelled with and when his feeling are reciprocated he is happy. But the BUT of both their situations is always upfront and uncomfortable. Maybe even deadly. Solo is a romantic fiction that may read as fairytale-like. The language used is not realistic in the purest gang-lingo-sort-of-way and it just basically romanticizes reality. Thing is, this IS romantic fiction and it meant to make the readers feel good and just forget about reality for a while. Well, I did forget for a while and it was all so worth it. Yes, I am a sucker for Carol Lynne, hit or miss, I don't care. Looking forward to the next installment whoever it may focus on next. My bet is Rowdy. I think. Well, I hope so. heheheeee
Posted by multitaskingmomma at 10:19 PM