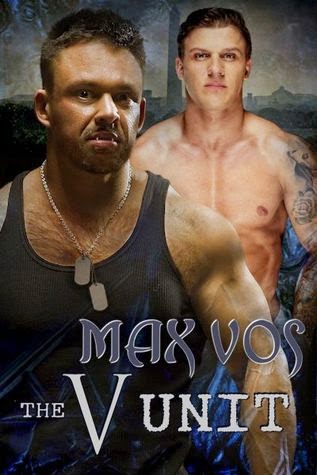 
Only a select few in the human world knew of the existence of the V-Unit, a small group of highly trained Marines - who happened to be vampires.
And it would have stayed that way.
But when events in the vampire world, threatened the stability of the human world, the powers that be called for the unit's specialized services.
An intrepid war correspondent, Bronson Rudan, who'd seen more than his fair share of fighting, stumbles across the unit by accident, and is drawn into their world.
Bronson has no problem with that, given that he gets to spend time with a hunky Marine Lieutenant, Sarge. Although he won't remember any of this when they're through.
At least, that was the plan...

Bronson Rudan, a highly respected war correspondent, literally stumbles into a world that surpassed his wildest imagination. Witness to the death of a youth and a killer his mind could not contain, he finds himself deep within the world of vampires and a top secret military unit whose job was to secure a territory from a rogue.

David, or Sarge, gave up his life for his country with full knowledge of what his new role was going to be. Never once did he think he could live in a world of the paranormal and still find a man whom he could trust and love, for eternity. His role as a vampire has now overlapped his role as a Marine Lieutenant and his duties take him to different levels of danger. Will he be strong enough to protect Bronson from this dark life?

The V Unit. The minute I saw this was from Max Vos, I just knew I had to have it and immediately made it a part of my wishlist. Well, now that I have finished reading it, I am happy to say that I have not been disappointed.

Just what a vampire story should be.

As vampire stories go, I am a fan, a real fan. However, this is not a cheesy romantic fangstory. It is not a read where the words can set the heart to thump and make me dream of becoming a vampire snack. Truth is, this is quite a violent tale that can surprise, disappoint, break the heart, and eventually kill a whole lot of romantic vampire fangirling.

Just the way I imagined a vampiric world would be.

Then again, the eroticism in this book sort of messed up with the violent turn of events so of course, I still ended up fangirling here. And blushing. And fanningmyfacesilly.

I just loved this.

Posted by multitaskingmomma at 10:45 AM