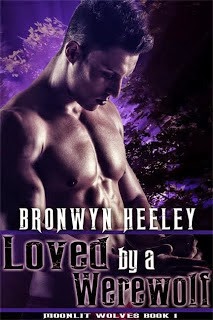 Loved By A Werewolf (Moonlit Wolves #1)
by Bronwyn Heeley

When you’re screwed anyway, hope for the best and get what you can.

Kidnapping the son of one of the mob leaders isn’t easy, and when said son happens to be a werewolf’s mate, it’s bound to get messy. 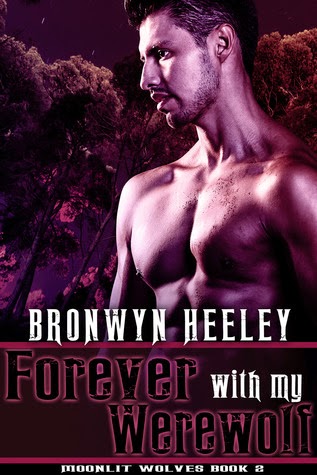 Forever with my Werewolf (Moonlit Wolves #2)

Love is never simple—especially when you find out your lover is a werewolf.
Running away from his lover after he changed into a werewolf, Tim ended up kidnapped by a group of Hunters. Now it’s up to Colin to bring him back and make it all up to him. But will Tim be able to forgive him when Colin finally gets him back into his arms? 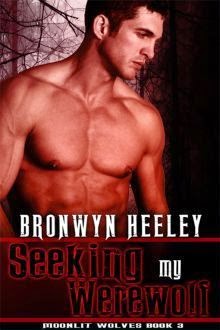 
Craig couldn’t predict setting a werewolf free would lead to this much trouble.

Two months after the kidnapping of his best friend’s mate, Phil can’t stop thinking about the Hunter that set him free. He can’t get the smell out of his nose, and it’s driving him nuts.
Craig’s only ever known one thing: hunting werewolves. He was born into it, raised to do nothing but kill the beasts—so why the hell did he set one free? Worse, why can’t he stop thinking about it?
When Phil and Craig meet up again, they start events that will slowly entangle all of them in the war that’s about to unfold—as long as they manage to survive the first wave.


The Moonlit Wolves series is about this group of werewolves who banded together for one reason or another. The most common element between this band of wolves is that they need to be together to keep themselves strong, healthy, alive and be with their mates. Thing is, when they got together, they really did not know the hows and whys of their being werewolves. They knew some of the stuff but a manual they did not have. They needed someone to tell them what they are, how they function as a species, and survive the world that is increasingly becoming more violent and dangerous for their young pack.

This is a series written much like a manga would be. It is quite graphic in terms of violence and could be a bit offbeat at times. Taken as a whole, however, it coheres quite nicely and the story arc becomes more solid. This is where I warn the readers: this series of books should be read one right after the other. Although book one may be a standalone, going into books two and three would be a bit confusing as the reader may wonder who is who and what is going on.

Book one of the series is Loved By A Werewolf and this tells the story of Jex and Matt. Jex is a mob boss' son and he had been trained from day one by his father to always be prepared for the worst - even rape. Thing is, what no one knows until they read through the story, is that Jex has this fetish: he loves the thrill, the pain, the anxiety and the fear in a scene - any scene. The thought of rape thrills him. Does this make him sick? He does not know. What is for certain: the thought sends him to nirvana - until the fear of the reality of a kidnapping slaps him in the face and his best friend, Matt, gets in the middle of it all. This book introduces the reader to the horrors, the violence and the romance of a wolf claiming and protecting his mate to whatever cost. This one is a tad short, when it is really not. This is a fast paced and action/violence book that sets the pace for the other books to come.

Book two,Forever with my Werewolf, is a different story altogether. Thinking that this will begin where the first book ended is a wrong assumption. This is when the arc of the story actually begins. Where we see the band of young werewolves who are a family in fact and protect each other at all costs. Matt is a member of that family and his mate, Tim, had been his lover for some time. When Matt finally decides to reveal himself, Tim panics and flees despite being a huge werewolf genre fan. Reality, it seems, is not the same as when watching the man shift to wolf form on reel. His panic sends him straight into the arms of hunters. And this is where the real fun begins.

Book three is Seeking my Werewolf. This is the story of Craig and Phil: a werewolf and a hunter. When Tim had been rescued by the pack, Craig found himself caught and bound by the most dangerous hunter of them all: Phil. But their connection was instant and all-consuming and no matter how Phil tried to avoid it, he could not hurt the animal in his arms. Instead of killing him, Phil breaks the ultimate hunter rule and lets the monster go. The story of how these two manage to find each other once more and finally accept their mating is a wonderful read and probably the best of the three books so far. This book, for me, is where the story arc finally gets to gel in all the right ways where the previous two books failed. In this book, I made a conscious decision that I really wanted to read more into this series. Find out more about the mystery of the werewolves and their mates.

Looking forward for more of this intriguingly different werewolf story.
Posted by multitaskingmomma at 9:58 PM