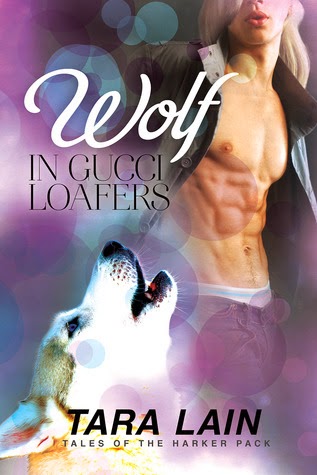 
Socialite Lindsey Vanessen wants someone to love who will love him back — an impossibility for a gay, half-human, half-werewolf. Too aggressive for humans, too gay for wolves, and needing to protect the pack from human discovery, Lindsey tries to content himself with life as a successful businessman. But when someone starts kidnapping members of wealthy families, Lindsey meets tough cop Seth Zakowsy—the hunky embodiment of everything Lindsey wants but can't have.
Seth has never been attracted to flamboyant men. What would the guys in the department think of Lindsey? But intrigue turns to lust when he discovers Lindsey’s biting, snarling passion more than matches his dominant side. It might mean a chance at love for a cop in black leather and a wolf in Gucci loafers.

What makes a man, a man? Is it the way he looks? The way he presents himself? Is it his ability to protect himself and his loved ones? Is it the way he talks? Is the definition of a man simply based on how he is perceived by  others?

We have one Lindsey Vanessen. Son of the heiress to the Vanessen group of companies and heir of his grand father's fortune, etc etc etc. He is much admired within his circles and also feared by them. He is a flaming queen and fashionista who can ride as one with the thoroughbreds he loves. He has fast cars and faster relationships. An out and out gay man who is a 'mass of contradictions' as Seth commented.

Seth. He is a cop, through and through. He looks it, he breathes it, he speaks it, he is a Cop. A man who, with one look, can down a perp. An investigator specializing in kidnappings whose track record is stellar. He is gay. He is a SAG - straight-acting-gay. Brought in to investigate the kidnappings within the rich and famous, he meets and greets Lindsey and all that he strove hard to become, are questioned. In front of him is a flamboyant man who is definitely not his type. Being there to assist him into the elite's circle, he needs Lindsey for a purely professional reason. Then again, he cannot resist Lindsey and it seems as though their 'relationship' is causing some talk among the upper crust and not all of them are accepting. In fact, there are some who are just bidding their time.

Lindsey is a man of many secrets and not even the Harker Pack knows what they all are. Should Lindsey reveal any of these, he may not only lose his family within the pack, but his budding romance with Seth could also be compromised.

This was a very light and easy read. A story of mystery, comedy, thriller, and erotica. This is also a shape-shifter story, a fantastic follow-up to The Pack Or The Panther. Quite an entertaining little read that made me smile.