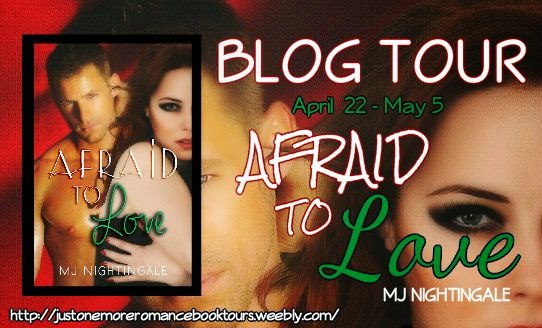 MJ Nightingale has spent over two decades teaching students how to write, and now she is doing it herself. Originally from Canada, she graduated from University with her Bachelor of Arts and then went on to get her Bachelor of Education Degree in Secondary Education.  Reading has been a part of her life since she was a child. She has been an avid lover of classical English and American literature, but romance has always held a special place in her heart.  She devours historical romance novels all summer long, and any type of fiction; thrillers, crime, suspense, and drama.  This is her second published book, and she has one more book, Afraid to Hope, coming out in in the summer of 2014. All three, Fire In His Eyes, Afraid to Love and Afraid to Hope, are erotic romance standalone novels and are part of her Secrets & Seduction Series. She is also working on a new series The Bounty Hunters for 2015.She currently lives in Florida, where she continues to teach, with her wonderful husband of nine years, and her sons.  She plans on pursuing her writing career full time very soon.
**MJ Nightingale would love to hear from her readers.  She can be reached at authormjnightingale@gmail.com and you can also visit her author page on Facebook 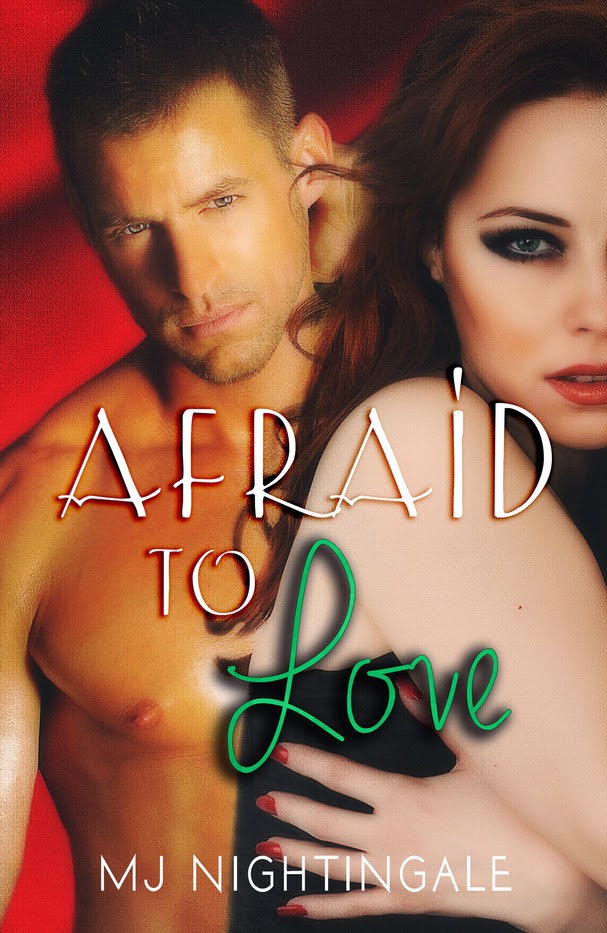 Learning to trust again is the hardest thing to do.Ana Perrot is crazy. Crazy about sex, and pleasing her lovers. She is passionate and as fiery as her red hair. She eats men like air. She is also willing to submit to any man anywhere. But outside of the bedroom, Ana is an independent woman who lives her own life by her own rules. And, her biggest rule . . . she won’t do long term relationships. She refuses to fall in love . . . again. Teddy O’Rourke is an easy going, laid back Tampa bartender at one of the most popular clubs in town. All about family and enjoying life including all the women that throw themselves at his feet, he has no problems finding willing partners. His football player body, his personality, his warm hazel eyes all ooze sex appeal. He is the perfect package in every way for a woman like Ana, well for any woman really. An ex-cop, his instincts tell him Ana is one hell of a woman, but she is wounded and scarred by the past. What are her secrets? What will make her trust him? Why is she so afraid to love?A one night stand, that is full of surprises for Teddy, opens his eyes to new possibilities. A single man enjoying his freedom meets his match in the bedroom, and elsewhere. He sees a future with Ana, a counselor for troubled youth. But could she be persuaded to fall . . . and to trust again? 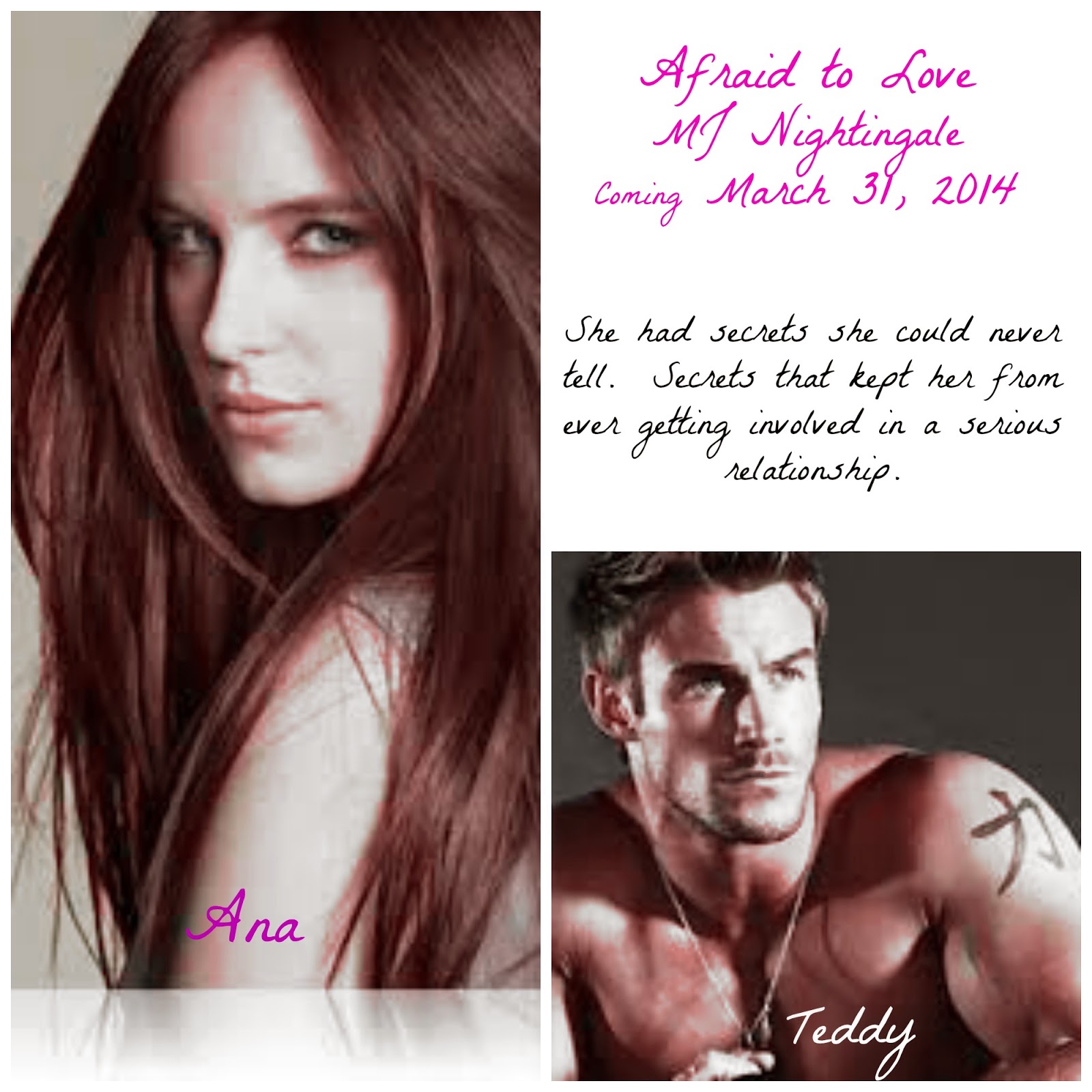 Review
My Rating: 4 out of 5 Stars

Afraid to Love is one book that truly surprised me. I had read MJ Nightingale's companion (since it's the same timeline and not really connected) book in this series and wasn't impressed. The second - now, this is the way a book should be written! The storyline is unusual, the characters quirky and real (maybe because I like Teddy's attitude more than Victor's and find Ana to have a lot more backbone than Monica!), added to twisting surprises throughout.

Ana is a redhead to the core: sassy, extroverted, and tough. Whatever problems she has, she keeps to herself. If she can't solve them, then they get buried and locked up. It works ok, until she meets Teddy, decides on a one-night stand, and he gets under and through her walls.

Teddy is one person I'd love to meet in real life. Something about his persona tells you that this is a man you can rely on, whether you ask him to or not. If he sees a problem, he'll fix it without you asking. Although that trait gets on independent Ana's nerves, he does it anyway because (1) he knows she needs help but just doesn't want to appear weak and (2) that's how he was brought up.

His rambunctious family deserves to be a whole other character novel in itself with his parents taking the starring role. I can't think of a person who wouldn't want familial support like that!

Steamy scenes are found in almost every chapter but they're not the focus here. They're just the background to a sweet romance that Teddy brings to Ana and a deep relationship that goes beyond what most erotica books would talk about. This is a great read for those who enjoy sexually provocative and intense stories. 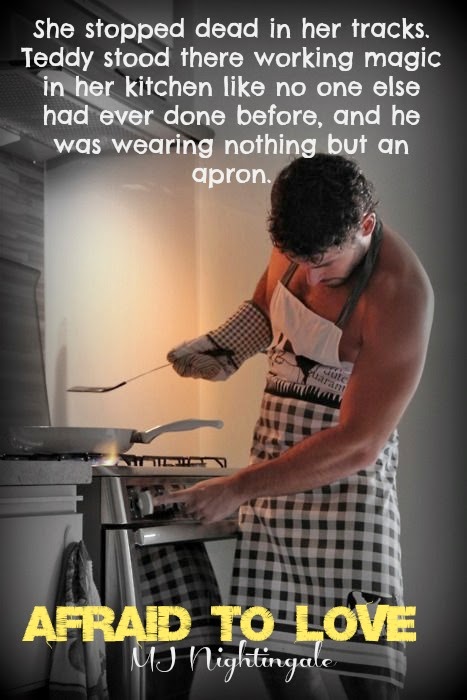 Link to you tube video trailer for Afraid to Love
http://www.youtube.com/watch?v=mUNylxBo764