Ann Lister is a native New Englander currently living on the island of Martha's Vineyard with her husband. She has pulled details from her years living in the New England area and uses many local settings and landmarks in her novels.
After graduating art school and raising two daughters, she established her own video production company. Her nearly two decades working in video production included work within the music industry and won her a coveted Telly Award. It was this 'behind-the-scenes' exposure to the music world that inspired many of her novels.
In 2013 she released Book One of her new rock star series: The Rock Gods. Book One is titled, Fall For Me. This novel is her first full-length gay, erotic romance and it is also a Finalist novel for the 2013 Rainbow Award.
Book Two in the Rock Gods series is titled, Take What You Want. This story is a m/m/f menage and released in early November 2013. Book Three, titled: Make You Mine, is expected to release in Spring of 2014.
When not writing, she enjoys reading, creating stained glass, and traveling. 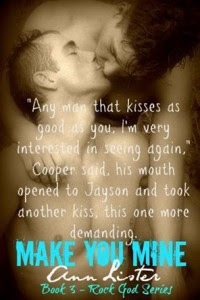 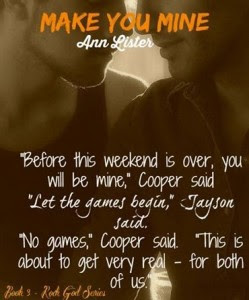 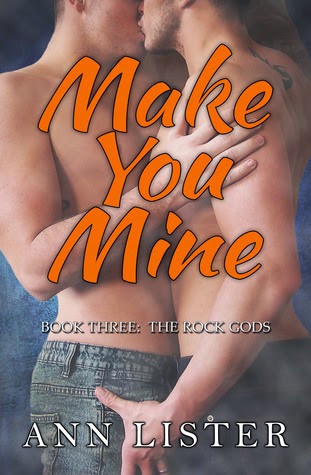 Cooper Rand is the high-energy drummer for his band Ivory Tower. Everyone is drawn to Cooper; which makes him the go-to party guy for those lucky enough to call him friend. He loves the lifestyle that comes along with being a rock star and feels perfectly suited for the role. He is also a professional when it comes to the hook-up, unwilling to stick around long enough to allow emotions to enter into what he's doing. He's lived his entire life 'in the moment' and it isn't until he meets Jayson that he begins to question the direction of his life and if he's been missing out on something truly special all this time. Jayson Keller has spent most of his life living on the island of Martha's Vineyard working as a builder. Living on a small, conservative island also has Jayson working overtime to keep his sexual orientation secret. He has mastered the art of hiding in the closet, but he doesn't want it to be a forever thing. Jayson always said if the right man came along he'd happily leave the safety of his closet and live openly as a gay man. The problem is, living where he does limits his partner options and finding someone worth coming out of that closet for seems an unlikely prospect.A party at Alex Metcalf's island estate brings Cooper and Jayson face-to-face. Lightning strikes hot and fast and suddenly their lives take a whole new path. Has Jayson finally met a man worth leaving his self-imposed closet? Have a couple of hours spent alone with Jayson opened Cooper to the idea there is a deeper meaning to life beyond the stage and the value of a committed relationship? But, a bigoted family and the rock star lifestyle could ruin everything and keep both men searching for what was standing right in front of them: a soul mate.

Cooper Rand, Ivory Tower's drummer, was in Martha's Vineyard enjoying himself at a party hosted by band mate Zander Metcalf when he meets and greets one Jayson Keller. They had a bit of a heated encounter but, when the night was over, Jayson had disappeared, leaving a needy Cooper wondering, 'what if?'

Jayson Keller had always been gay but family and community kept him from being out. Not one to be considered shy, his short time with rocker Cooper Rand left him wanting for more. Never did he once consider the man to call him and ask for a date.

When Cooper and Jayson finally get over their first date, both knew they needed more and so, despite all the reasons not to, they do date each other and surprisingly, without the other's knowledge, they make it exclusive. This scared both men privately and quietly, they never thought a hook up could turn into a relationship.

Make You Mine spans a whole year in the relationship that was Cooper and Jayson and they go through a series of ups and downs, misunderstandings and bouts of miscommunication. This is normal for any developing relationship and the author does not hesitate to pit both men against the other, making them work for what they both willingly wanted to fight for. And really, both men worked very hard to make their relationship work. They both realized early on that they wanted and needed the other, so fighting for solidity was a given. This was what drove me to continue reading their story. Yes, there is romance, there is erotica, and definitely there is drama, but all these were important slices of what could only be considered as the makings of a long lasting and loving partnership.

I read Make You Mine, the third installment to The Rock Gods series by Ann Lister, as a standalone. This story happens within the timeline of the first two books, Fall For Me (The Rock Gods, #1) and Take What You Want (The Rock Gods, #2) but it did not really matter. Ann Lister did a magnificent job in creating a story within two other stories. It did not read choppy or get me lost in the process of the read. Truth is, I had never read this series but I felt the confidence while reading, never once getting lost, then realized halfway through: I was falling in love with these two men and wanted them to have their forever. 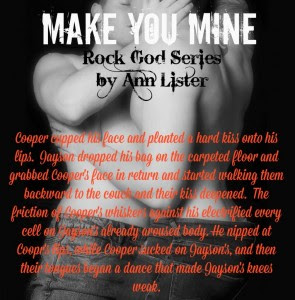